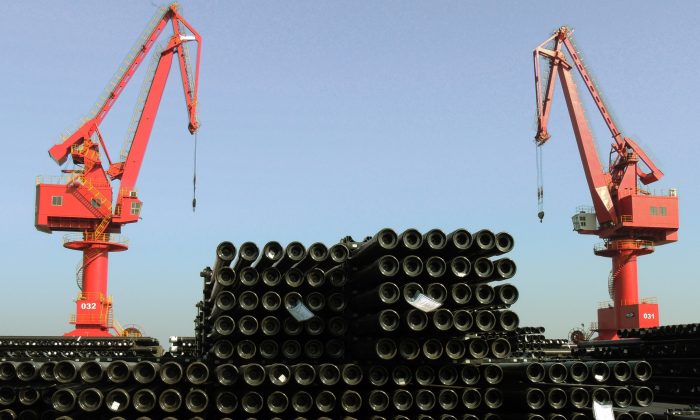 Steel pipes at a port in Lianyungang, eastern China's Jiangsu province, are being loaded for export on Dec. 1, 2015. (STR/AFP/Getty Images)
China

According to a 2014 report on China’s 2,818 listed companies, the net income of 494, or 17.5 percent of them, is under 15 million yuan (US$2.31 million)—less than the price of a good apartment in Beijing, Shanghai, Guangzhou, or Shenzhen. Furthermore, the net income of 1,065 companies, or 37.8 percent, is less than 55 million yuan ($8.47 million), not enough to purchase a luxury apartment in Shenzhen. This data indicates the abysmal state of China’s economy.

I see four major causes for the low earnings by so many of China’s top companies.

One: Of China’s top 500 enterprises, and those listed as Fortune 500, the most profitable all enjoy monopoly status. Whether they are financial institutions, telecommunications companies, or oil companies, their profits are derived from having been granted a monopoly by the state.

Two: Almost all Chinese companies have become involved in the financial market in recent years. Any available cash is immediately invested in finance, banking, or insurance sectors—the reason being a shortage of other investment opportunities.

Four: Recently there’s been a saying in the investment community that there are two types of enterprises: “profitable” ones and “valuable” ones. The valuable ones may actually have huge financial losses. Do venture capital and private equity funds like the profitable or the valuable enterprises? The answer is, they like valuable enterprise because there is room for future expectations and a potential source of collecting money.

These four points sum up the reality of China’s economy. During the last boom cycle, Chinese companies relied on nothing other than these four main factors to make money: monopolies granted by the state, financing, real estate speculation, and capital markets.

When a nation’s wealth comes from finance and real estate, rather than from technology and industry, the country’s economy will inevitably become emptied and hollowed out. Monopoly-type enterprises are not motivated to improve their technology to increase earnings. The flip side of this is low profitability of industry and a relatively poor overall economic situation that make financial and real estate investments the most logical choice for many businesses.

If the nature and source of wealth is mainly acquired through monopolies, real estate, and a virtual economy, this economic model has no foundation. Ultimately, with a shrinking industrial base, the economy will become empty. It will evolve into a pyramid scheme that only pursues distribution of wealth, rather than creation of wealth.

The fact that profits of nearly 40 percent of listed companies are less than the cost of an apartment unit indicates how difficult it is for China’s industry to create wealth. China has completely been kidnapped by the real estate sector. In particular, the love of real estate by governments at all levels has turned the Chinese economy into a system of wealth distribution around real estate.

According to U.S. economist Edmund Phelps, excessive investment in real estate curbs innovation, because real estate absorbs funding that could have been invested in productivity gains, innovation, medical technology, software, or alternative energy. These are the fields that drive growth, he says. Phelps, speaking of his own country, says that in order to revitalize the economy and to grow again, Americans need to overcome their love of houses. He notes that in the United States, too, real estate as a tool of wealth distribution has damaged the manufacturing sector.

Throughout history, economic superpowers had strong manufacturing sectors as their base. But after China became the world’s largest manufacturing country in 2010, everyone had the tendency to underestimate manufacturing. High-level seminars were filled with Internet giants; few manufacturers were invited. Talks about entrepreneurship had nothing to say about industry. Everyone avoided industry. It was all about the Internet, which disappeared as quickly as clouds.

China’s future economic growth is not built on “getting-rich-quick” stories, nor on a continuously booming real estate market. If capital does not flow into the manufacturing sector, the economic foundation will further shrink. During the past decade of fast growth, China was able to rely on real estate and low-end industries while ignoring serious imbalances in income distribution and extremely low welfare benefits for migrant workers. But once economic growth returns to normal, gaps in the social system may lead to serious problems.

Ma Guangyuan is a well-known independent economist in China. He is the vice director of China National Democratic Construction Association Central Economic Committee and a financial commentator for CCTV. He is also a columnist for Financial Times Chinese, Southern Weekly, the Economic Observer as well as many other Chinese media. This article was abridged and translated from a recent article he posted to WeChat, a popular Chinese social media platform.