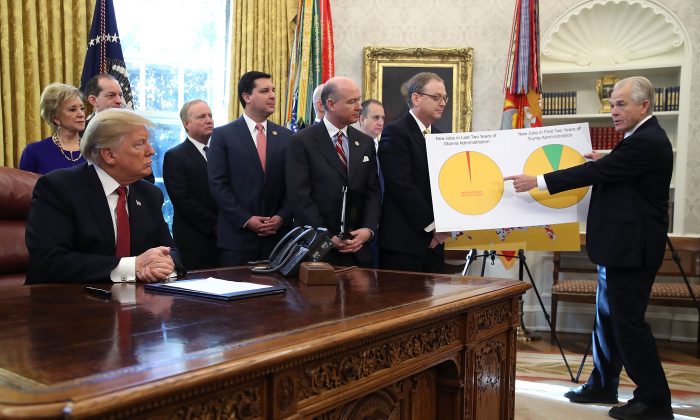 President Donald Trump listens to Peter Navarro (R), Assistant to the President for Trade & Manufacturing, speak in the Oval Office in Washington on Jan. 31, 2019. (Mark Wilson/Getty Images)
US News

WASHINGTON—The Trump administration is pushing lawmakers to revive the U.S. Export and Import Bank, by breaking the logjam that has prevented the bank from operating since 2015.

The federal export credit agency can’t approve loans and guarantees above $10 million, since a minimum of three board members is required to have a quorum. Confirmation of the nominees sent by the White House by the full Senate will allow the bank to finance large projects of U.S. exporters, such as commercial aircraft and power turbines.

“The Exim Bank does not have a quorum because U.S. Congress has refused to confirm nominees this administration has sent to Capitol Hill,” he said at the Exim Bank’s annual conference on March 28. “These nominees have not been voted down. They are not even reaching the floor for votes.”

The bank provides loans and other credit tools to help U.S. businesses that seek to export their products to foreign markets.

Currently, four out of five voting member seats on the bank’s board are vacant. The four nominees sent by President Donald Trump are still pending confirmation by the Senate, and no date has been scheduled for the vote.

In addition, the bank’s mandate is set to expire Sept. 30 and hence, reauthorization is an extra challenge facing the bank this year.

The bank funds large multinational corporations such as Boeing, Caterpillar, and GE. It’s also an important source of credit for small businesses.

More than 90 percent of the bank’s transactions—over 2,200—directly supported exports from U.S. small businesses in fiscal year 2017. In addition, thousands of smaller companies that serve as suppliers to large exporters also benefit indirectly from the bank’s activities. Exim Bank also supported over 1.7 million jobs across the country over the past decade, according to the bank.

Trump nominated Kimberly Reed to be president of the bank last June. She was among the four people nominated for board slots in 2017; the Senate Banking Committee approved all four in December.

The White House believes the credit agency’s role is crucial for both economic and national security purposes. It’s an important tool to compete with other countries such as China that have strong export-finance agencies, according to Navarro.

“We are getting hammered—particularly by China, South Korea, and the other countries in the G-7,” he said.

Hobbling the bank costs tens of billions of dollars to U.S. corporations and thousands of job losses, he added.

According to Navarro, China’s export credit agency had an estimated $363 billion in medium and long-term loans in 2017 compared to U.S. Exim bank’s $70 billion.

Since the bank lost its quorum in 2015, the U.S. economy has lost $21 billion in overseas opportunities, he said, adding that transactions worth $40 billion are still sitting in the bank’s pipeline.

However, Democrats and business-oriented Republicans have supported the revival of the bank. In December 2015, President Barack Obama signed legislation that reauthorized the bank through Sept. 30, 2019.

Critics argue that the bank is used as a tool by the United States to subsidize its exports by providing below-market interest rate loans and loan guarantees for American companies. They claim that the majority of its loans in dollar terms go to a small number of politically connected giant corporations.