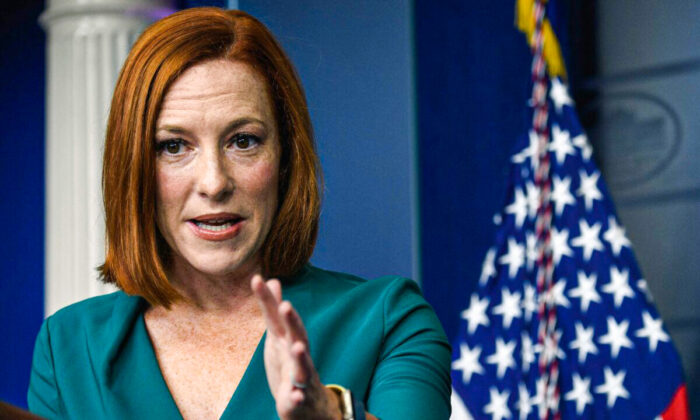 White House press secretary Jen Psaki on Thursday defended the Centers for Disease Control and Prevention (CDC) for not deciding to change its definition for “fully vaccinated” to include a booster dose.

Earlier this week, the CDC’s director, Rochelle Walensky, said during a COVID-19 briefing that “we are now recommending that individuals stay up to date with additional doses that they are eligible for” but also said that “individuals are considered fully vaccinated against COVID-19 if they’ve received their primary series … that definition is not changing.”

On Thursday, Psaki was asked by a reporter whether the federal government is considering changing the definition.

“What the CDC is advising is for everyone to be up to date on their shots,” the Biden administration’s top spokesperson told reporters at the White House. “That means if you’re scheduled at that point to have a booster, you should get a booster, and that is true. That is how they conduct their guidance for basically any shot regimen for diseases.”

Psaki then reiterated that the CDC is currently “advising people if they’re due for a booster, they should get a booster.”

The CDC’s terminology around what constitutes fully vaccinated or not could have far-reaching implications. Many businesses and agencies follow the CDC’s recommendations when doling out vaccine mandates for employees or customers.

An increasing number of businesses and organizations—namely universities—within the United States have started to issue booster mandates as a condition for employment or remaining a student. Some, including Harvard and New York University, have required boosters for when staff and students return from their winter breaks, respectively.

Some major U.S. hospitals also started to require COVID-19 boosters, including several in the Boston area.

Mass General Brigham, Beth Israel Lahey Health, Wellforce, and the Dana-Farber Cancer Institute reportedly told their employees Tuesday that they will have to show proof they’ve obtained a booster shot in the coming weeks.

“In the face of Omicron, boosters have become almost a necessity, particularly for those of us vaccinated more than five or six months ago,” said Dr. Megan L. Ranney, academic dean for the Brown University School of Public Health who works at Rhode Island Hospital, according to the Boston Globe.

On Wednesday, a proposal for a vaccine booster mandate for indoor events in city-owned facilities in San Jose cleared a procedural hurdle after the mandate was passed unanimously in a City Council Rules Committee meeting.

“There’s no benefit in waiting. We see what’s happening throughout the country. We know we have a trajectory ourselves here in the Bay Area of a rapidly increasing case counts. We need to do everything we can to keep people safe. And that means, let’s use our common sense,” said Liccardo, according to CBS San Francisco.

Meanwhile, Israeli authorities said that people have to get boosted with the Pfizer vaccine six months after they have received their two-dose series in order to keep using their “green pass,” or a vaccine passport used to enter restaurants, gyms, and similar businesses.