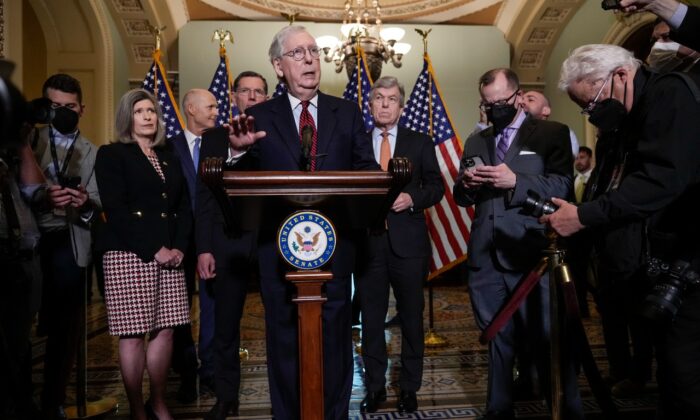 Where’s the Republican Political Strategy for 2022?

The Dow Jones Industrial Average was down 1,049 points on Sept. 13 in response to the latest devastating inflation report from the Department of Labor. Overall year-over-year inflation, according to the Consumer Price Index (CPI), was 8.3 percent in August, with core inflation at a shocking 6.3 percent year-over-year.

But that’s hardly the only bad news in the Biden–Democrat economy. As reported by Reuters, “U.S. household wealth fell by a record $6.1 trillion in the second quarter to its lowest in a year as a bear market in stocks far outweighed further gains in real estate values.”

And on the producer side, as reported by Trading Economics, “new orders for US manufactured goods fell 1% month-over-month in July of 2022.”

Oh, and the national debt will top the $31 trillion mark before the end of the month.

The only reason that increasing gas prices don’t get a “check” is that the Biden administration has been draining the U.S. petroleum reserve to its lowest level since 1984 (after the Arab oil embargo ended) to artificially lower gasoline prices ahead of the November elections.

He’s whining about fundraising problems while dissing candidates—who recently won Senate primaries—endorsed by former President Donald Trump. In the most important midterm elections in recent memory, where’s McConnell’s overt leadership and national communications strategy in conveying exactly what the Republicans would do to reverse the disastrous policies of President Joe Biden and progressive Democrats in Congress?

Perhaps McConnell wishes to hide his role in helping the Democrats pass gargantuan spending measures–such as the $280 billion computer chip funding legislation—which are the root cause of high inflation. Or maybe he wants Americans to forget his caving to Senate Majority Leader Chuck Schumer’s (D-N.Y.) Democrats last year, when he handed them an emergency debt extension that opened the floodgates for the Democrats’ spending measures this year, as reported by The Federalist.

McConnell is a creature of Washington. He has been in the Senate since 1985 and either the majority or minority leader since 2006. His Senate Leadership Fund PAC is the gold standard of the Republican establishment for campaign fundraising.

After Labor Day, that PAC pumped $18.4 million into Senate races in Pennsylvania, Georgia, Ohio, North Carolina, Nevada, and Wisconsin. But none of that money went to Blake Masters, the Trump-endorsed Senate candidate in Arizona who trails incumbent Sen. Mark Kelly (D-Ariz.) by only 2 percentage points, according to a Sept. 10 Emerson poll. And none of those funds went to Republican Tiffany Smiley in Washington state, who trails longtime Sen. Patty Murray (D-Wash.) by a mere 3 percentage points, as reported on Sept. 3.

But maybe that’s just the problem. If the Republicans take the Senate in November (which is no sure thing, given the absence of a national strategy at this late stage), an influx of Trump-endorsed America First senators could put McConnell’s Senate leadership post at risk. This is a distinct possibility, as Sen. Rick Scott (R-Fla.), chair of the National Republican Senatorial Committee (NRSC), appears to be jockeying for the position himself.

In a Washington Examiner editorial on Sept. 1, Scott specifically called out “the establishment wing of the Republican Party” for trashing some GOP candidates in swing states.

“Many of the very people responsible for losing the Senate last cycle are now trying to stop us from winning the majority this time by trash-talking our Republican candidates … [and are] giving anonymous quotes to help The Washington Post or The New York Times write stories trashing Republicans.”

Was Scott alluding to McConnell (or his staffers) as being the source of some of those leaks? That’s entirely possible, since Scott called out McConnell by name in a Politico interview on Aug. 31: “Sen. McConnell and I clearly have a strategic disagreement here [on the quality of Republican senate candidates]. … We have great candidates.”

The loss of political power means the loss of big donors—anathema for a long-serving senator used to wheeling and dealing and controlling Republican caucus votes with PAC money. But if the Democrats hold the Senate—which would largely be because of a poor Republican political strategy, given all of the obvious political problems that the Democrats’ agenda has created for themselves—McConnell would likely retain his position as minority leader (along with access to all that big donor money during high stakes pay-for-play deliberations in the next Congress).

Has he calculated that it’s better to be a handmaiden to Schumer’s Democrats than to risk losing his Senate Republican leadership role? That would certainly explain his dissing of Trump-endorsed Senate candidates.

If any midterm election should be nationalized, it’s this one. The Contract with America greatly served Newt Gingrich’s Republicans during the 1994 midterms. By focusing attention on a Republican congressional platform rather than simply on individual races, the contract included a list of eight reforms that the Republicans promised to enact, as well as 10 pieces of legislation that they promised to bring to floor debate and votes, if they were made the majority party in Congress following the 1994 election.

The reforms included three core Republican principles—accountability, responsibility, and opportunity—which resonated with many Americans. And the Republicans subsequently gained 54 House seats and nine Senate seats and flipped both chambers of Congress.

As the 1994 Contract with America was introduced a mere six weeks before the elections, there’s still time for McConnell and House Minority Leader Kevin McCarthy (R-Calif.) (the prospective Republican speaker of the House) to produce their own Contract with America to galvanize voters this year by giving them real reasons to vote Republican, not merely to vote against Bidenomics and left-wing Democrat policies being crammed down Americans’ throats.

What might the 2022 version of the contract include? Here’s a starter list of congressional actions and legislation:

Real actions attacking inflation immediately, restoring U.S. energy production to pre-Biden levels, reversing left-wing cultural attacks by the federal government that are dividing Americans, returning federal law enforcement to the principles of equal justice under the law for all Americans, and shutting down the flood of illegal immigrants coming into the country—these are simply logical actions that should be included in a 2022 Contract with America.

A coordinated announcement by all GOP leaders and candidates with an accompanying nationwide communications strategy would give voters real reasons to vote Republican this year.

What’s preventing McConnell (and McCarthy) from doing the obvious?