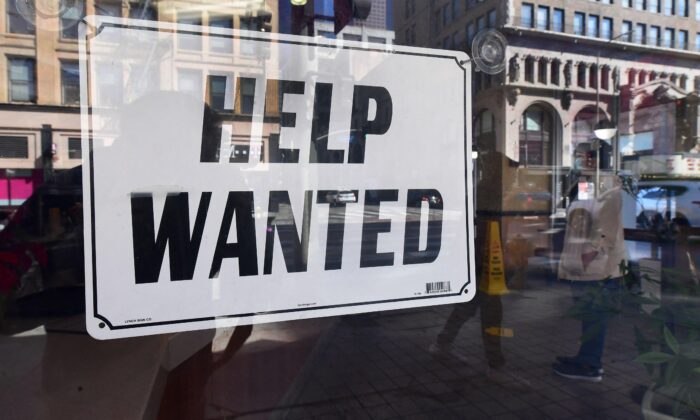 A "help wanted" sign in front of a restaurant in Los Angeles on Feb. 4, 2022. (Frederic J. Brown/AFP via Getty Images)
Business Columnists

What’s Your Side Hustle?

Jeffrey A. Tucker
Jeffrey A. Tucker is the founder and president of the Brownstone Institute, and the author of many thousands of articles in the scholarly and popular press, as well as 10 books in five languages, most recently “Liberty or Lockdown.” He is also the editor of The Best of Mises. He writes a daily column on economics for The Epoch Times and speaks widely on the topics of economics, technology, social philosophy, and culture.
View profile
Follow
biggersmaller
Print

An insurance company has done a survey to answer a fascinating question: What percent of U.S. workers hold a second job to generate income separate from their main income stream? They surveyed 1,000 people and came up with a surprising answer: 93 percent.

You are probably nodding your head right now because it rings true. There are so many options out there from Uber and Lyft to Etsy and DoorDash to filling out online surveys for cash.

Everyone seems to be looking for workers. The car parts place you use all the time needs workers on Sundays, so you step up. The lady down the street is going back to the office but needs day care, so you volunteer. The worker shortage, which is acute, means that everyone who wants to work can snag a second job in a flash.

There’s also the motive of mitigating risk of termination. We are probably already in recession, and it seems only a matter of time before it’s officially declared. The chance of genuine change in policy from the current path of command and control to vibrancy and enterprise is virtually nil. The regime in charge daily tells us they favor privation over prosperity. Despite epically awful polling numbers—an 18.1 percent divide between approve and disapprove—this will make a difference.

We’re in for 2 1/2 more years of this. The bear market could last that long, and so could the inflation rate as it stands. And that’s likely a good scenario.

Given this, it makes sense to keep your options open.

It’s an odd feature of economies with high inflation rates that finding a job doing something for some money isn’t really a problem. In Weimar Germany with soaring inflation, people worked longer and harder hours than ever. It was a race between income and purchasing power, like being on a treadmill powered by your own labors. You run and run but don’t actually get anywhere. Stopping, however, means falling off.

The labor markets in general have been in wild upheaval since the lockdowns of 2020, which caused record numbers of people to leave the workforce entirely. Many came back only gradually, while many others decided just to take their earnings and drop out completely. This chart, plotting three demographics and their labor force participation, creates a very odd picture. It’s expressed in percentage change in participation by men, women, and people over the age of 55.

Such a wild swing could only have been caused by a calamitous policy from the top down. Even now, overall participation levels haven’t quite reached pre-pandemic highs; there’s also invisible damage there. Labor participation was rising dramatically before the lockdowns, in an environment teeming with optimism about the future.

Many jobs would have been created that we’ll never see. Instead we find ourselves struggling to get out of the pit.

This chart reveals what might have been. Instead we find ourselves struggling for income. The rat race is on, and many people are either not reporting how they’re managing or adding extra jobs just to make ends meet.

So far as I know, there has been no mention of this problem by the Biden administration, even though it affects nearly every American family today. And this accounts for much of the seething anger that so many people feel today toward our lords and masters.

Despite all the rough and tumble of trying to stay ahead, everyone but the very rich is falling behind. Just recently, the rate of increase in household debt service payments had exceeded the rate of change of income. That’s another way of saying: we are getting poorer and trying to borrow against the future just to keep our standard of living from falling too far.

Here’s a picture of discontent put as plainly as possible. Embedded in this chart is also the story of the greatest swindle of our lifetimes. The government gave everyone free money and made us feel rich even though the economy was being destroyed. When things opened up again and people decided to carry on with their lives, they discovered their dollars were not worth what they used to be. The new riches quickly turned to dust, as inflation ate away at the government’s benevolence. The looting has continued without end.

What choice do people have but to turn against leisure and start to work nights and weekends on second, third, and fourth jobs? All this data reveals millions of personal tragedies taking place as people adjust from the belief that they lived in a land of opportunity only to find out they live in a land of rising poverty.

This accounts for the palpable anger out there as people search desperately to find the reason for how things could have gone so wrong so fast. The Federal Reserve is supposed to fix things, but it would be completely foolish to believe this is probable or even possible. The only real fix is a complete turn in policy priorities and a dramatic institutional upheaval to make that turn permanent.

If you’re looking for another side hustle, even one that doesn’t pay much but can have a big effect, it’s time to throw yourself into the intellectual battle for the future of this country. What went wrong was the devaluing of freedom as a core principle. To revalue freedom and make it again the central idea of American life should be the first priority of anyone who truly cares about the future.