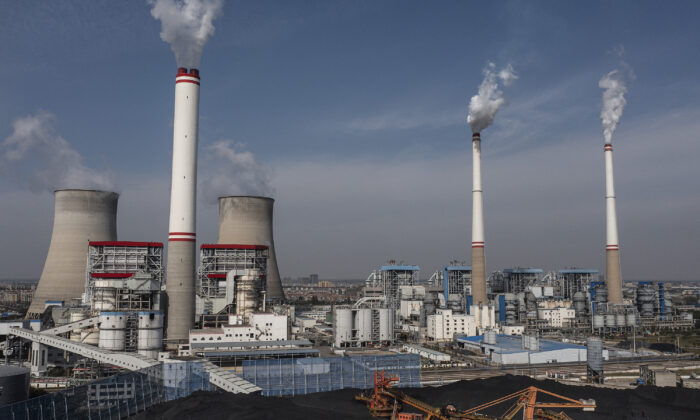 What’s in Store as Beijing Takes on Climate Change?

The Chinese regime and the United States agreed to work together to address climate change, in a surprise announcement on Nov. 10 at the COP26 climate summit in Glasgow.

In a joint statement, the world’s top two greenhouse gas-emitting countries declared their intention to cooperate by reducing methane emissions, protecting forests, and phasing out the use of coal for power generation.

“It’s beneficial not only to our two countries but to the world as a whole that two major powers in the world shoulder special international responsibilities and obligations,” Chinese climate envoy Xie Zhenhua said at a press conference. “We need to think big and be responsible.”

Many climate policy leaders in the United States welcomed the news, expressing hope for future cooperation with China. “The US-China Joint Glasgow Declaration is one of the most important results of COP26,” said Ken Alex, director of Project Climate and adviser to the California-China Climate Institute. “While the language of the declaration is primarily aspirational, it reflects a willingness of the two largest greenhouse gas emitting nations to work together on climate change despite simmering tensions across a range of other issues.”

This declaration is an important indication of China’s priorities, Alex explained. “The Joint Declaration likely gives a signal to the Chinese provinces that they can proceed with climate action and work with sub-national governments like California.”

In Taiwan, climate activist Alex Ko expressed more guarded optimism. “This declaration is positive and very surprising,” said the founder of climate action group ‘Fridays for Future—Taiwan’. “I look forward to seeing the cooperation go forward. But even if China agrees to reduce carbon emissions, we do not know if they will follow the agreements or not. NGOs and governments will not be able to travel into China to verify it.”

“In this way,” explained Ko, “the climate change issue in China is similar to the human rights issue. If U.N. officials or NGOs want to go into China to investigate human rights abuses, they cannot.”

But even if the Chinese regime and other governments remain faithful to their commitments in the years ahead, will they make a real impact on climate change?

According to a new report by Climate Action Tracker, the answer is a clear no. “With all target pledges, including those made in Glasgow… emissions in 2030 will still be around twice as high as necessary for the 1.5°C limit,” states the report published Nov. 12. In addition, the report finds that only four nations have a concrete plan to reach “net zero” carbon emissions.

The United Nations Environment Program came to a similar conclusion in early November, stating in a report: “Given the lack of transparency of net-zero pledges, the absence of a reporting and verification system… it remains uncertain if net zero pledges will be achievable.”

Activist Greta Thunberg was even more blunt. “It is not a secret that COP26 is a failure,” she said during a speech in Glasgow. “The COP has turned into a PR event,” complained Thunberg, “where leaders are giving beautiful speeches and announcing fancy commitments, while behind the curtains, governments… are still refusing to take any drastic climate action.”

China is the largest producer of greenhouse gases, with emissions of methane and carbon dioxide that continue to rise every year. Its fast-growing economy is also the world’s largest user of coal, with consumption more than doubling since 1998.

Recently, China has announced its intention to move away from coal. In April, Chinese leader Xi Jinping announced that Beijing will begin controlling coal consumption during the next Five-Year Plan (2021-2025) and will work to reduce coal consumption by 2030.

Yet despite these statements, China continues to build coal-burning plants at a record pace. According to the Global Energy Monitor, “In 2020, China built over three times as much new coal power capacity as all other countries in the world combined—the equivalent of more than one large coal plant per week.”

According to activist Alex Ko, this split reflects the conflict between China’s economic development and its desire to be a leader on the world stage. “The Chinese Communist Party must worry about economic growth and people’s welfare, and not just climate change,” he said. “But they are also very worried about their world image.”

“China wants to convince other countries that they will take action to solve the climate change problem,” said Ko. “This is very important to them.”

This desire to project a positive international image can be in direct conflict with China’s domestic needs in energy production, household heating, and manufacturing. How Beijing resolves this conflict, says Ko, may pose a real danger to Chinese citizens.

If China is faithful to its climate change commitments, he said, new policies may come at the expense of China’s poor.

“Remember that China is a dictatorial government,” explained Ko. “They can implement any kind of policy, immediately. If they want to control emissions, they can do it. The Communist Party controls everything. China is like a national concentration camp.”

“Because of this,” said Ko, “I am very concerned that China will sacrifice the lives of the poor to give a better appearance to the world media.”

This has happened before: The Great Leap Forward (the Chinese regime’s second Five-Year Plan) was a national campaign aimed at transforming China from an agrarian society into an industrialized communist society. It ended in disaster for millions of Chinese.

From 1958 to 1962, Chinese Communist Party chief Mao Zedong commanded the nation to increase grain outputs and develop new industry in the countryside. When Mao’s overly ambitious production targets could not be met, local officials faked it, falsely reporting full quotas and non-existent surpluses. The Chinese Communist Party boasted of huge increases in agricultural and industrial output, as its citizens suffered a government-created famine.

The Great Leap Forward resulted in the deaths of millions of Chinese people from starvation, with estimates as high as 55 million dead. It was the largest famine in human history.

Ko is very concerned about these dangers. “Right now China is having serious problems due to a shortage of coal,” he said. “The government has allowed the price of coal to rise, and that has led to electrical blackouts in many areas. People are suffering.” Ko fears that the same could happen if central authorities decide to suddenly mandate large reductions in coal usage, or reductions in emissions.

As in every other nation, China’s climate change policies are linked to its policies for economic development and human rights. But as a communist regime increasingly closed to the world, Beijing presents special challenges to cooperation with the world community.

According to Ko, there is another way forward—one that is playing out in his home of Taiwan. Although Taiwan is not a member of the United Nations, and so cannot participate in international climate meetings, it continues to make its own efforts to address environmental issues.

“Only through democracy and a free society,” said Ko, “can we reach a more sustainable future. That should always be a goal with future climate conferences: preserving freedom and working together to make a better future. We must remember that there are many other human rights issues that are related to climate change policies,” he said. “If we want to pursue a sustainable future, we have to care about the rights and prosperity of all people.”