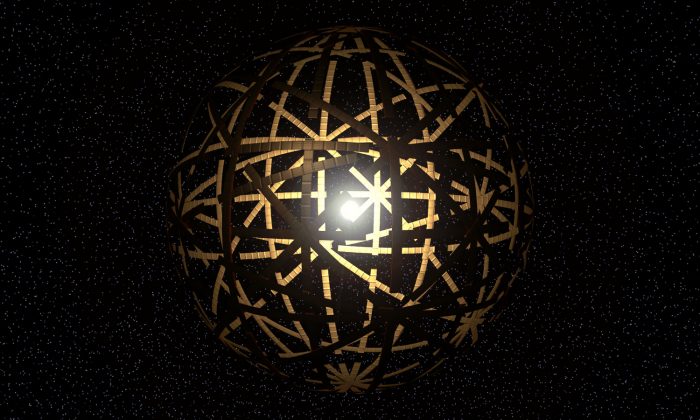 Is this what we’re seeing around KIC 8462852 - a colossal megastructure built by alien intelligence? Probably not. The reality might be even more interesting. (Kevin Gill, CC BY-SA 2.0)
Science

Whatever the Strangest Star in the Galaxy Is, It’s Sure to Be Amazing

For the past few days, the media has been abuzz with one of the most peculiar astronomical observations for many years. As described in a recent paper on the arXiv preprint service, a faint star in the northern constellation Cygnus has been seen acting incredibly strangely.

The star, KIC 8462852 – somewhat hotter, younger and more luminous than our sun – was observed by the Kepler spacecraft for over four years, 24 hours per day, 365 days a year, along with more than 100,000 other stars in the same patch of sky.

Kepler was designed to monitor the brightness of those stars with exquisite precision, looking for tell-tale tiny “winks” that would indicate that they were orbited by planets.

And Kepler has found planets in abundance; more than 1,000 to date, with more being confirmed all the time.

But in the case of this faint star in Cygnus, it has found something else. Something unexpected. And we still have no idea what it is.

Some commentators have even suggested that the observations might represent the discovery of advanced alien life!

That might be something of a stretch, but it is certainly true to say that the current observations have astronomers baffled. But that isn’t a bad thing.

The Unexpected Through Astronomical History

Many of the greatest and most exciting discoveries in astronomical history were unexpected and serendipitous, and ended up greatly revolutionising our understanding of the universe. Usually, such discoveries were made as new or improved technology allowed astronomers to study the sky in new ways, or in more detail.

That’s exactly what’s happened here, with KIC 8462852. It’s purely because of the unique ability of Kepler to study hundreds of thousands of stars continually for years at a time that the unusual behaviour was found.

Here are just three examples of how serendipity has driven astronomical understanding:

In 1781, using a homemade telescope Sir William Herschel discovered Uranus while scouring the sky looking for double stars. In one fell swoop, Herschel’s discovery doubled the radial scale of our solar system, and gave birth to the search for other planets. The chance find eventually led to the discovery of Neptune, through its gravitational pull on Uranus.

The idea that there could be more planets in our solar system also led to the scouring of the sky that found the first asteroids in the early 1800s. The first asteroid found (Ceres) was another serendipitous discovery!

Although some astronomers were searching for objects between the orbits of Mars and Jupiter, Giuseppe Piazzi was instead constructing a new catalogue of stars. As he scoured the sky, he stumbled on the faint moving asteroid, purely by chance.

From those humble beginnings, we now know of hundreds of thousands of asteroids orbiting between Mars and Jupiter. We have also found tens of thousands of similar small bodies further from the sun (the planetary Trojans, and the trans-Neptunian objects).

Our knowledge of these objects, their distribution and their sizes, has been an incredible boon to scientists trying to disentangle the story of our solar system’s formation and evolution.

Bird Poop in Our Telescope or the Big Bang?

In the early 1960s, there was great debate over the origin of the universe. The two leading theories – the Big Bang and Steady State models – had been developed in response to the observed expansion of the universe (another serendipitous discovery, in the early part of the 20th century, by Vesto Slipher and others).

Theorists studying the two models were striving to make predictions of what we might observe in each case. A number of scientists had pointed out that if the universe had been created in a Big Bang, and was once smaller, denser and hotter than it is today, then a relic of that heat should be observable to the current day.

As a result, astronomers at Princeton University were in the process of preparing a survey to search for that “relic radiation”. At the same time, just down the road, Arno Penzias and Robert Wilson were testing a new 6m horn antenna radio telescope.

That telescope was highly sensitive, and Penzias and Wilson were attempting to characterise its performance, and to remove known sources of interference so that it could be used to maximum effect.

They first cooled their detector, using liquid helium, to just four degrees above absolute zero. They then processed their data, removing all traces of known interference.

But one signal remained: a persistent background noise that was present no matter where in the sky the looked, or whether they were observing at night or during the day.

They considered a variety of different sources of noise that could cause the signal. They even, famously, cleaned the horn of guano deposited by pigeons nesting in the antenna. But none of this got rid of the signal. The only conclusion that remained was that it was extra-terrestrial, but the two were still flummoxed.

As it turned out, they had accidentally discovered what is now known as the microwave background – the thermal radiation left behind by the Big Bang. Their accidental discovery netted them a Nobel Prize, in 1978, and in many ways gave birth to modern observational cosmology!

In July 1967, a talented young PhD student at Cambridge University was carrying out observations using a new radio telescope, the Interplanetary Scintillation Array. Jocelyn Bell (now Dame Jocelyn Bell Burnell) was undertaking a painstaking analysis, by eye, of vast reams of data traced out by the telescope as it scanned the sky.

As she scanned through her data, she spotted an incredibly regular pulsating signal that was tracking with the background stars across the sky. Like the observations of KIC 8462852, the signal initially defied all explanation.

Such regular radio pulses, originating from a single point in the night sky, were totally unexpected. The “clock” was ticking once every 1.33730208831 seconds, more regularly than clockwork.

As they tried to understand the nature of the signal, Jocelyn and her PhD supervisor, Anthony Hewish (who was eventually awarded the Nobel Prize for his part in the discovery), considered several possible origins, including speculative thoughts that it just might be an extra-terrestrial signal (though they thought that unlikely).

Once their observations were published, theoreticians elsewhere quickly realised that the best explanation for the unexpected signal was in fact purely natural. The source was not “little green men”. Instead, it was something almost more fantastical: the dead core of a star more massive than the sun, left behind by an ancient supernova explosion.

That object, a neutron star, was smaller than a city, and the pulses were the result of hot spots on its surface, flicking across our view each time the star completed a single revolution on its axis. The object was a pulsar, and a new branch of astronomy was born.

All of this brings us back to our latest big news story. Over the past few years since it was first observed by Kepler, KIC 8462852 has exhibited occasional, short lived, dips in brightness. So far, that’s how every Kepler story starts.

But with KIC 8462852, the dips are different. When a star is transited by a planet, a tiny fraction of that star’s light is blocked, and we see a dip in its brightness. The bigger the planet, the bigger the dip in brightness, and the easier it is to spot.

But where a planet like Jupiter, the solar system’s largest planet, would cause the sun to dim by just ~1% as it passed between us and our star, the dips seen for KIC 8462852 are huge: the largest being 15% and 22% of the star’s light, fading out, then brightening again.

That, in itself, is weird. But there’s more. For a planet, the winks generated would be periodic: one orbit, one wink.

Here, and by contrast, the dips in KIC 8462852’s brightness are not periodic. The two largest occurred roughly 730 days apart, but smaller dips have also been seen. And the most recent large drop (22% of the stars light) was followed by two other, smaller dips over the month that followed.

Added together, it is clear something very strange is happening. No star has ever been observed behaving like this before. And so speculation has run rife as people attempt to explain this new and unexpected behaviour.

The short answer here is: we don’t know. At least, not yet. The authors of the paper on arXiv suggest the most likely explanation could be a cloud of comets, disintegrating as they orbit the star.

Such events are known to occur around the sun, so this idea isn’t entirely outlandish.

The Kreutz family of sun-grazing comets, which include some of the most spectacular comets in recorded history, have a long fragmentation history, and may be linked to a parent that was over 100km across, just a few thousand years ago.

The Taurid debris stream is all that remains of another giant comet, thought to have fragmented tens of thousands of years back. It delivers upwards of 50% of all the dust falling on Earth, and includes the famous comet 2P/Encke. It is so vast that it is encountered by all the terrestrial planets, and Earth spends almost six months of every year traversing it.

So comet fragmentation can occur. But even with a colossal cometary collapse, it is hard to imagine how fully 20% of a stars light would be obscured. Add to that that such a collapse should produce a vast quantity of dust, which will make the star shine brightly at infrared wavelengths, which is something we simply do not see.

So what else could it be?

Perhaps it is a young planetary system, and two of the planets just collided? That would create a huge amount of dust, which again could obscure the light from the star.

But once again, we come back to the problem of infrared light. So much dust would give the star a huge infrared excess, absorbing its visible radiation, getting hot, and re-radiating it beyond the visible. That simply isn’t seen.

So we come to the most speculative suggestion, and the reason that this faint star has attracted so much attention over the past week or so. What if the dips in brightness aren’t natural? Maybe they’re caused by a giant mega-structure built, or under construction, by intelligent advanced aliens.

Could the dips be explained by something like a partial Dyson sphere? Giant structures like this pervade science fiction and are the signature of species with technology immeasurably beyond our own.

Well, it’s certainly possible, but I wouldn’t place bets on it just yet! Extraordinary claims like this require extraordinary evidence, and astronomers will be studying KIC 8462852 for years to come, trying to disentangle the mystery.

Personally, my money would be on this being something akin to the discovery of the first pulsar: unexpected, and unexplained as of yet, and opening a door to a new process or kind of object previously unknown. Not life, but something almost as interesting: new science!