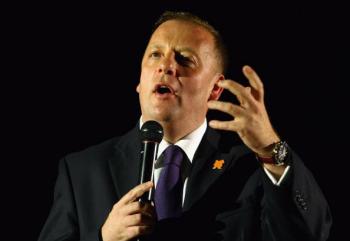 Ian Clement, Deputy Mayor of London talks to media and guests at the opening of London House ahead of the Beijing 2008 Olympic Games on August 7, 2008 in Beijing, China. (Paul Gilham/Getty Images)
International

Sex, Spies, and Audiotape: What to Watch Out for on Your Official Trip to China

OTTAWA—Ian Clement said he should have known better when he traveled to the Beijing Olympics in 2008 as London’s deputy mayor. He had been briefed by Britain’s intelligence service, but he didn’t listen.

“They told me about honeytraps and warned me that the Chinese secret service often use women to entice men to bed to get information. I didn’t think for one minute that I would fall for it,” Clement admitted to the Mirror newspaper last week.

Clement said the attractive Chinese woman he met at a party likely drugged his drink. After he’d passed out, she went through his room, collecting information about London’s operations and business dealings.

Indeed, Mr. Clement should have known better. Just a few weeks before his Olympic trip, the story of another U.K. government staffer caught with his pants down in China was splashed over the British media. That man, an aide to the British prime minister, also fell victim to a honeytrap. He woke after a night with a Chinese woman to find his blackberry stolen, a theft that security experts said jeopardized U.K. parliamentary email servers.

Before defecting in Australia, Chen was the consul for political affairs in the Chinese Consulate in Sydney. His main responsibility was to monitor Chinese political dissidents in Australia.

Sex and money are often used as bait, he says. The honeytrap is a favorite tactic Chinese intelligence uses to try to catch an official in a sex scandal. In this scenario, the official or staffer is approached by a beautiful Chinese vixen who proceeds to seduce him. She may ransack his hotel room, search through his laptop or cell phone, or use video of the indiscretion as blackmail.

Chen says while he was in office one Australian official on a visit to China was detained by the authorities after he was caught having sex with a girl who was not yet 16 years old. They released the man, keeping evidence of his affair, after he “offered to work for the regime, similar to an agent,” Chen says.

“Publicly he tried to speak for the regime,” Chen says, including by arguing the regime’s stance in Australian media.

“[Officials] should be cautious around Chinese officials,” warns Chen. “They may be trapped by money or the promise of some benefits from Chinese top officials. They should be very careful while enjoying the entertainment offered by the Chinese government.”

Another former Chinese official specifically warned Canadian officials visiting China in an interview he gave to the Canadian Press in 2005. Guangsheng Han made headlines that year when he tried to defect to Canada. In Shenyang, a city of nearly eight million, Han spent 14 years as head of the Public Security Bureau and another five years with the Judicial Bureau.

This week he told the Epoch Times that the Chinese regime is zealous about gathering intelligence and Chinese hotels—including hotels owned by foreign companies—are staffed with national security agents. Unwary officials can expect that their luggage will be secretly searched and any documents copied.

Like the Brits, Canadian intelligence is aware of the risk and warns Canadian officials visiting China, but those warnings are often ignored, says former Canadian Security Intelligence Service (CSIS) agent Michel Juneau-Katsuya, who used to head up the agency’s Asia-Pacific desk.

“Definitely CSIS will give them a briefing, but we are not really sure they pay attention to CSIS. They are often extremely naive and believe that CSIS [agents] have seen too many James Bond movies.”

Juneau-Katsuya says Chinese intelligence will likely be more careful when dealing with high-level officials like heads of state because of the extra security and media attention, but will “deploy their entire arsenal of surveillance and electronic monitoring” for middle or lower-ranking officials and their staff.

“I am quite sure that anybody and everybody who will be there will have what we call the ‘fully equipped room,’” he says.

“You can be sure that every single conversation, they will try to monitor it. They will have every single person on this delegation with people assigned to follow them, to make sure they don’t meet with the wrong people or whoever, and who knows, perhaps collect some dirt along the way.”

But besides looking for useful information, Chinese intelligence agents are also looking for sympathetic politicians and well-placed staff who can be either coerced, bribed, or simply charmed into helping the Chinese regime achieve its foreign policy objectives.

If they do identify a likely target, Juneau-Katsuya said that Chinese diplomats will then approach them in Canada later to court them.

“They will definitely try to develop what is referred to as soft power.”

The aim of all the intelligence-gathering is to gain influence, he said. The Chinese have long known “that control is not the ultimate power. Influence is much greater—it demands less energy and allows you to do much, much more.”

David Harris, a terrorism expert and former chief of strategic planning for CSIS who is now director of the international and terrorist intelligence program at Insignis Strategic Research in Ottawa, says the Chinese efforts to influence our officials run deep, and can be long-term.

“There is a great deal to be concerned about in having dignitaries go to China. Chinese intelligence is notorious for stopping at nothing to secure information from foreign dignitaries or from trying to extort and pressure information out of people. Efforts at blackmail are hardly unknown.”

Harris says efforts to influence officials and bureaucrats can be undertaken years later, when a junior special assistant or secretary may have risen to a position with access to sensitive information, or has gained the ability to hire other agents into their department.

“It’s terribly important that officials in China conduct themselves with circumspection and discretion. You can also assume that all meeting rooms, where officials are, will be wired for sound or video.”

The regime’s favorite and most effective way to collect intelligence is through flattery, said Harris, and establishing what might appear to be a genuine and sincere lasting friendship. Chinese intelligence agents are masters of psychology and manipulation techniques. Their files on prime targets can go back decades and they look for vulnerabilities that can be exploited.

“The vulnerabilities can range from issues of money, debt, greed, sexual habits and orientations—anything that would permit openings. So if someone has a taste for business, then of course business propositions can come their way,” said Harris.

The payoffs can be monumental, he says. For example, a private briefing to a state leader might reveal that country’s fallback positions in important trade negotiations. With that knowledge, the Chinese can push their advantage to the maximum at a potential cost of billions to the other side.

Besides winning economic advantage, the regime hopes to sway or significantly influence other country’s foreign policy as it relates to China. Some of the bureaucrats and others who fall under Chinese influence become unconscious agents of the regime, he says. Others may act knowingly.

“People think bureaucracy is regulated and regimented, reliable, but if you can gain influence over a director general who travels in the delegation, then policy options can be narrowed in favor of China very early on in the policy development and decision-making stage of government.”

That scenario is most dangerous, he says, because someone high in government or the bureaucracy coming under strong Chinese influence compromises the decision making process of another state from within.

Harris says he’s heard of cases where policy decisions become widely known among the ranks of those close to China before they are even finalized in Canada. When pressed for more details, he said he was not prepared say more due to security concerns. “I can’t go beyond that but it is not surprising, of course.”

In the end, the only lasting solution according to Harris and Juneau-Katsuya is that officials and their staff are well aware of the risks and keep their own interests firmly in mind.

“It is extremely disturbing to see some former senior politicians, diplomats, and others who have made cozy perches for themselves in China,” says Harris.

We should also keep delegations as small as possible to limit vulnerabilities, he says. And beware the so-called “friend of China” tactic.

He said the sometimes a high-ranking Chinese official or other well-placed person will warmly declare some foreign official or business person to be “a friend of China,” but it would be “stunningly naive” to take that at face value.

“If that kind of thing happens, people need not feel flattered—they can properly feel used and manipulated. … You have one country to which you owe loyalty in law and policy, and you better decide which one that is.”