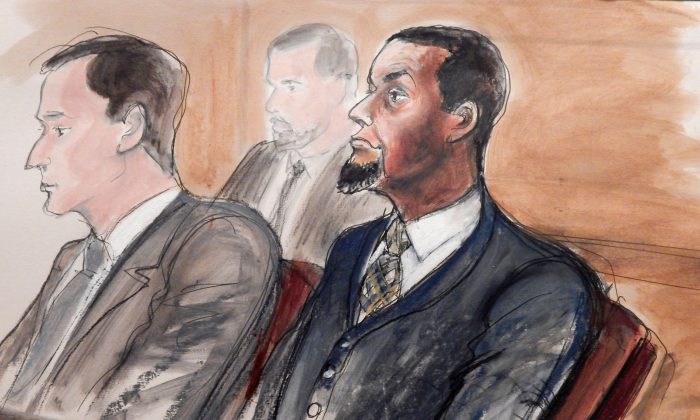 In this Feb. 24, 2016, courtroom file sketch, Tairod Nathan Webster Pugh (R) sits at the defense table with his attorney Zachary S. Taylor, during jury selection in a federal court in the Brooklyn borough of New York. Pugh, a U.S. Air Force veteran and former airplane mechanic charged with trying to join the Islamic State, was convicted by the jury on March 9, 2016. It was the first verdict to result from more than 70 cases the government has brought against U.S. citizens accused of trying to support the militant group. (AP Photo/Elizabeth Williams)
Opinion

Law enforcement is trying to draw the line between sympathizers and terrorists, and the Internet is making it even harder to pin it down

Tens of thousands of foreigners reportedly attempt the journey to Syria and Iraq to join terrorist groups such as the Islamic State (ISIS). This is the crime that ex-U.S. serviceman Tairod Pugh was recently trialed and convicted for. However, his defense team argued that he had not taken any concrete actions to join the extremist group before being arrested in Istanbul. We talk to Karla Cunningham, an expert on extreme violence, to get her views on what is and isn’t terrorism.

RG: In the United States, a man was just found guilty for attempting to join ISIS. What’s your take on this case?

Cunningham: There are really three dimensions to this case. First, why would a U.S. man want to join ISIS? Second, is what this man did a crime? Third, why are there so few successful prosecutions of individuals for trying to join foreign terrorist organizations?

From my understanding, this case was ultimately about whether Mr. Pugh was a tourist when he went to Turkey or a militant on his way to the battlefield. Usually cases are tried before individuals actually join up with their intended target, which is why it’s hard to bring a prosecution, although there have been hundreds of cases in the United States alone since 9/11.

According to prosecutors, Mr. Pugh engaged in a long series of radicalization steps that moved beyond simply self-identification. Thus, I’m not surprised they sought to prosecute and I’m not surprised it was successful. This case involved more than Mr. Pugh downloading and viewing radical content. He crossed over the radicalization line to action. However, that action didn’t involve actually meeting up with ISIS on the battlefield. That’s the sticky wicket of countering radicalization and it’s a fine line.

I’d argue ISIS occupies virtual space in much the same way it occupies Syria and Iraq.

RG: The suspect was arrested in Istanbul before he actually took concrete actions to join the terrorist group, and his defense team argued that joining ISIS was purely a fantasy for him. In your opinion, what actually defines a “terrorist”?

The debate over what is—and isn’t—terrorism among observers is long-standing and heated. I won’t resolve it here. I will say though that terrorism is now something different than it used to be in part because it’s being waged increasingly through and in cyberspace (or perhaps more accurately virtual-space to include cell phone apps).

Virtual space has become a main arena of disseminating information, coordinating attacks, recruitment, counter-intelligence activities—the list is long. As a result, what does “concrete action” mean in this virtual space? I’d argue ISIS occupies virtual space in much the same way it occupies Syria and Iraq. It is planning and directing terrorist activity using this virtual space. Terrorists occupy one or both of these spaces or battlefields, usually simultaneously.

The criteria that observers will need to use to assess terrorists is not just holding certain beliefs, but indicators of movement toward concrete action in support of a designated terrorist organization. This concrete action can be online or offline.

RG: Throughout history there have been many cases where people have been sentenced based on allegations, rather than their actions. Do you have any concerns that this could occur in the terrorism trials that are happening today?

Cunningham: I’d ask what is “action” when it comes to terrorism. Terrorism involves not just attacks but a significant level of support and capacity to carry out its terrorist ambitions. This includes intelligence, recruitment, and supply-chain management, to name just a few categories. Much of this activity occurs in virtual space today. Targeting individuals who are operating in this space will be important to damaging the capacity of terrorist organizations.

I think it’s important to be careful about the all-or-nothing extremes that we seem so prone to. This is really at the heart of the current stand-off here in the United States between Apple and the FBI, and the larger issue of high level encryption available in virtual space that enables terrorists and criminals and obstructs enforcement efforts. There is a general hostility toward security forces at perhaps one of the worst moments.

It’s a fine line between protecting civil liberties and witch hunts. The reality is that counterterrorism sits in between these two extremes. Robust laws that are transparently enforced are important to ensure that neither extreme dominates.

RG: More concretely, how does the search for the line between sympathizers and terrorists compare to the Red Scare?

Cunningham: The Red Scare moved beyond concrete concerns about Soviet espionage to a political tool designed to constrain political freedoms (namely, to hold beliefs that ran counter to the government) and target political opponents.

It’s not unusual for people to hold radical beliefs; however, the move to action is what distinguishes that a line has been crossed.

ISIS depends on followers that never cross the traditional line of action, but their behavior doesn’t clearly situate them as sympathizers either. This isn’t unique to ISIS. However, ISIS has operationalized its use of the virtual-space battlefield in a very effective way. This makes drawing the line between sympathizer and terrorists particularly difficult with this group.

Why The Brussels Attack Was All But Inevitable

RG: Reports have come out that the FBI is introducing new guidelines for schools called “Preventing Violent Extremism in Schools,” with vague description of what constitutes extremist behavior. What is your take on this?

Cunningham: I doubt it’s going to have a huge effect on anything. It focuses too much on the mind space and not the emotion and curiosity that initially draws people to groups like ISIS. That said, it will potentially be useful as a teaching guide to stimulate dialogue about what is and isn’t extremism.

In addition, it’s worth taking a step back to consider that what the FBI is doing isn’t unique. The U.K. has a robust counter-extremism program, and it’s come under heavy criticism. There are efforts to facilitate identification of potentially violent students to prevent the ubiquitous school shootings that seem to be almost weekly events now in the United States.

All of this moves us towards the original question of “why?”—why does a person “join” ISIS or commit other acts of extremism and violence? This is the million-dollar question, but there is no one answer that will fully resolve it.

RG: The difference between a terrorist and freedom fighter can vary dramatically depending on what side of history you are on. What are your thoughts on this and can you speculate on how people will look back on ISIS in the future?

Cunningham: Terrorists and freedom fighters both use violence but ISIS’s use of extreme violence has moved it firmly out of both categories to some extent. It reminds me very much of the visceral world reaction to both Japan and Germany after World War II, when the scope of their atrocities were fully understood. The violence used by the two countries went beyond the norms of war and needed to be acknowledged and punished. Extreme violence is about overkill and delegitimizes its user. It violates the most fundamental tenets not only of international law but also of more intrinsic moral beliefs embodied in discourse such as just war theory.

RG: What are the cruelties that make ISIS comparable to the atrocious German and Japanese violence in WWII?

Cunningham: The violence we see used by ISIS is—and has been—mirrored in too many places over the past decades. Beheadings and torture were used by their predecessor, Abu Musab al-Zarqawi, who led al-Qaida in Iraq. They’re used almost with impunity by various Mexican drug cartels. Enslavement of captured girls and women, along with genocide, are used by Boko Haram in Nigeria, and punctuated the 1990s with genocidal campaigns in both Yugoslavia and Rwanda.

Similarly, taking a step back to World War II, violence wasn’t unique to Japan and Germany. For example, city bombing used by the Allies in both Germany and Japan, not to mention the use of atomic weapons, led to catastrophic loss of life.

Thus, it isn’t necessarily the tactic that matters or even the loss of life that distinguishes extreme violence. What matters is the intention. It’s the systematic and sadistic application of violence to not only beat your opponent but to punish, if not erase, them.

Violence is highly instrumental and a message itself to both supporters and opponents. ISIS’s significant use of virtual space is what distinguishes the group from many of its competitors, both past and present. It is here that ISIS is able to amplify the effect of its violence, especially its extreme violence. The violence itself is attractive to many of its followers. In virtual space, those followers are able to facilitate this violence as well as experience it without ever leaving their homes or countries.