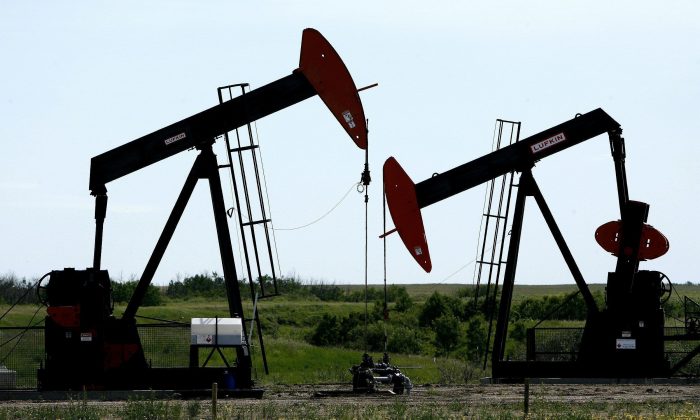 Pumpjacks at work pumping crude oil near Stettler, Alta., in a file photo. (The Canadian Press/Larry MacDougal)
By Rahul Vaidyanath

Amid the pandemic recovery the demand for oil is exceeding its supply. But investments in oil and gas companies and their development of new projects are coming under increasing scrutiny due to ESG, which analysts from Deutsche Bank say could elevate inflation in the long run. And higher inflation is already one of the biggest concerns people have.

And it’s rapidly gaining steam as an investment mandate. Morningstar identified 41 new sustainable investment vehicles that came to market in 2020 from Canadian firms, which was more than twice the number launched in 2019.

Under ESG, a portfolio manager might not invest in a company if he or she deems the risk it faces from climate change to be too severe, for example. Another scenario is that investors may invest only on condition that the company works to mitigate environmental risks like climate change.

The pressure on oil companies to reduce oil and gas exploration and adapt their business models to a low-carbon world has significantly increased over the past few months, says Deutsche Bank strategist Francis Yared in his June 2 blog, titled “ESG is unwinding the shale oil revolution.”

He also notes that crude rig counts have lagged the oil price recovery and stand at a third of their 2014 peak.

The price of oil as measured by the U.S. benchmark West Texas Intermediate (WTI) has now recovered to over US$70 a barrel from below $20 during the first lockdown last spring. It’s the first time since October 2018 that the WTI price per barrel has topped $70. WTI was priced at over $100 a barrel in 2014.

Deutsche Bank’s Jim Reid told clients in a June 9 note that it will be harder to get oil out of the ground in an ever more ESG-sensitive world.

“Pricing climate change externalities more generally could make things more expensive over time. Are we on the verge of another change in inflation expectations due to oil and energy, one that is in large part due to ESG?” Reid asks.

Meanwhile, the International Energy Agency (IEA) says on the one hand that oil supply needs to ramp up while on the other hand that there must be no new oil and gas projects.

In its June oil market report, the IEA said that by the end of 2022, global oil demand should surpass pre-COVID levels and that OPEC+ needs to open the taps to meet the growing demand.

In May, the IEA published a road map to net zero by 2050 in which it said that no new oil and gas fields must be approved for development. The road map would require countries to make significant investments as it notes that most countries’ pledges to reach net zero by 2050 are not yet supported by near-term policies and measures.

“In the meantime, oil demand looks set to continue to rise, underlining the enormous effort required to get on track to reach stated ambitions,” according to the IEA’s June oil market report.

Canada’s big oil companies maintain that they are working to reduce emissions. Five of them, which combined operate about 90 percent of the country’s oilsands production, announced on June 9 the launch of their Oil Sands Pathways to Net Zero initiative.

The goal of the initiative is to work with the federal and Alberta governments and local indigenous communities to achieve net zero by 2050. The companies are working on multiple fronts, including carbon capture, utilization, and storage technology; clean hydrogen; and electrification.

The executives of the five companies in the alliance—Canadian Natural Resources Ltd., Cenovus Energy, Imperial, MEG Energy, and Suncor Energy—stated in their press release that these efforts demonstrate Canada’s commitment as a responsible energy provider and will position it as an ESG leader in oil production.

“The Oil Sands Pathways to Net Zero initiative is an industry-driven, made-in-Alberta solution which will strengthen our position as global ESG leaders,” said Alberta Energy Minister Sonya Savage in the press release.

Energy is the best-performing sector in the TSX in 2021 so far—up over 35 percent as of June 11—but Jeff Tonken, CEO of intermediate oil and gas company Birchcliff Energy, says institutional investors who specialize in energy stock are gone. Many disappeared last year and some have rebranded their funds as solar or carbon-neutral investment funds, he said.

He warned that as a country, Canada should ensure its energy self-sufficiency. Eastern Canada, in particular, imports a significant amount of its oil supply, he added.

“We’ve got to be very careful here that people just don’t squeeze the industry so hard that we as a country lose our self-sufficiency in this and during that process commodity prices are going up,” he told BNN Bloomberg on June 10.

Canada’s latest inflation reading showed a 3.6 percent rise since last May—the fastest yearly rise since May 2011. The Bank of Canada said on June 9 that inflation will likely remain near 3 percent through the summer but is expected to come down later this year.

Rahul Vaidyanath
Journalist
Follow
Rahul Vaidyanath is a journalist with The Epoch Times in Ottawa. His areas of expertise include the economy, financial markets, China, and national defence and security. He has worked for the Bank of Canada, Canada Mortgage and Housing Corp., and investment banks in Toronto, New York, and Los Angeles.
Epoch Share
Friends Read FreeFacebookTweet
Copy Link