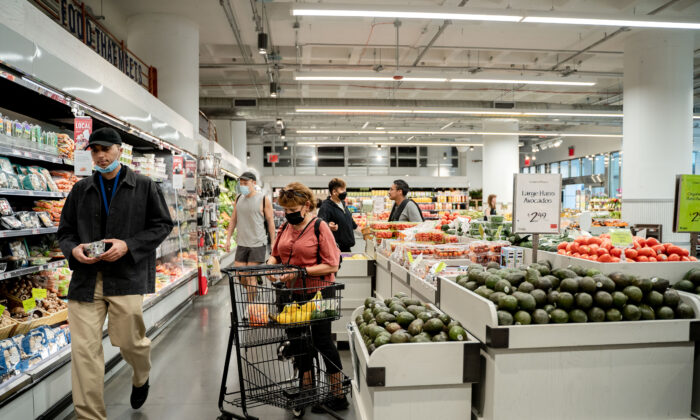 People shop at a grocery store in New York City on May 31, 2022. (Samira Bouaou/The Epoch Times)
Thinking About China

What Do Watermelon Prices Have to Do With Putin’s War?

Food prices are skyrocketing. Biden is right to blame Putin—but only partially.

Food prices are sky high. On a recent trip to the supermarket in America, I spent $30 on a watermelon. It was a heavy 23-pound melon, but it lightened my wallet more than expected.

Watermelon buyers better weigh first and do a little math before plopping them in the shopping cart. That shopping trip alone cost me $381.

I’m not the only one with sticker shock. The guy in front of me pleaded for a discount. And loudly. (It did not move the jaded checkout lady.)

Over the last year, fresh fruits increased 8.5 percent in price, according to the U.S. Bureau of Labor Statistics (BLS). That’s consistent with an 8.6 percent increase in food prices generally, from May 2021 to May 2022.

What’s driving the price of our watermelons to such high levels?

First of all, energy. Farmer tractors need fuel. Trucks that transport food need fuel. Many synthetic fertilizers, herbicides, fungicides, and pesticides are made from petroleum products.

Fuel oil has more than doubled in price by 106.7 percent over the year. Gas is up 48.7 percent. Disruptions to oil production and transport lines in any part of the world, because energy markets are global, unfold to the rest of the world quickly.

The biggest disruptions to global energy markets are caused by Vladimir Putin’s war against Ukraine.

This flows into much of the food inflation we see in the United States, including due to not only energy supply disruptions but the sanctions that followed the war and decisions by countries like China and Saudi Arabia to slow the export of oil and gas.

Russia is also trying to punish Europe for its sanctions by, ironically, drastically reducing the flow of Russian gas exports.

Global shipping is fouled up, including by pandemic disruptions to containerized cargo, delivered by ship and truck. The disruptions are still unfolding in supply chains today, including in the world’s biggest port of Shanghai, which continues to be snarled by the effects of COVID lockdowns.

In 2021, China exported over $84 billion in food. Slowdowns in Shanghai ports could have global effects on food prices.

According to the International Monetary Fund, the result of global COVID challenges “was that the cost of shipping a container on the world’s transoceanic trade routes increased seven-fold in the 18 months following March 2020, while the cost of shipping bulk commodities spiked even more.”

Much of the world’s grain comes from Russia and Ukraine. Sanctions are hitting Russian grain and fertilizer exports, and a Russian blockade of Ukrainian ports is making it difficult to ship grain and sunflower seeds, which contribute significantly to the world’s edible oil supply.

The effects can be found in your local supermarket. According to the BLS data, margarine is up 25 percent.

Ukrainian grain from last year is still sitting in silos, unable to get out of the country, just as the summer harvest should be coming in. This will have long-term effects on grain supply and prices because the longer it sits, the more it degrades.

Grain is the primary component in many livestock feeds, including for chickens. So the price of chickens and eggs is skyrocketing. Frozen chicken is up 19 percent, according to the BLS. Eggs added 32 percent to their price.

Food markets are global and relatively fungible, so any Chinese food exports that would have gone to the United States but for tariffs could be diverted to other markets. The global food market could then supply cheaper, non-tariffed alternatives in U.S. markets.

There are other inflationary pressures specific to the United States.

The Democrats pushed through a $1.9 trillion stimulus package in March 2021. The San Francisco Federal Reserve estimates that 2021 prices (core inflation, which excludes volatile fuel and food prices) increased by 0.3 percent and prices will increase by 0.2 percent in 2022.

That was after a $3 trillion spending bill, passed with bipartisan support in 2020, that provided pandemic relief in the form of direct checks and substantial unemployment benefits.

The U.S. money supply (M2) increased over a trillion dollars in April 2020, a peak over spring and summer increases that year.

M2 growth plus its velocity increased by double digits in 2020, to the highest ever since at least 1960. Inflation quickly followed. Financial historian Niall Ferguson called it “the biggest monetary overshoot in 60 years.”

Shortly after the $1.9 trillion stimulus, the Biden administration called inflation a temporary phenomenon. Secretary of the Treasury Janet Yellen called it a “small risk” in 2021.

Three weeks ago, Yellen admitted she was wrong.

Now, experts say inflation will take a couple years to fix, including through increased interest rates that could push the country into a recession.

The Cleveland Federal Reserve governor, Loretta Mester, said on June 19 that the risk of recession is growing due to the concurrence of counter-inflationary measures and slowing GDP.

“The recession risks are going up, partly because monetary policy could have pivoted a little earlier than it did,” Mester told CBS.

“We’re doing that now by moving interest rates up but, of course, there’s a lot of other things going on as well.”

A recession could mean fewer jobs, so less money to buy groceries. Those who saved their thousand-dollar pandemic checks from a couple years ago will be needing them now to buy watermelons.

And overreliance on dictators for cheap goods and energy gives them dangerous and costly illusions of grandeur. That was a loan many of us didn’t realize we were taking out. We’re paying for it now in increased defense expenditures.

The chickens have come home to roost. And gosh, are they expensive.