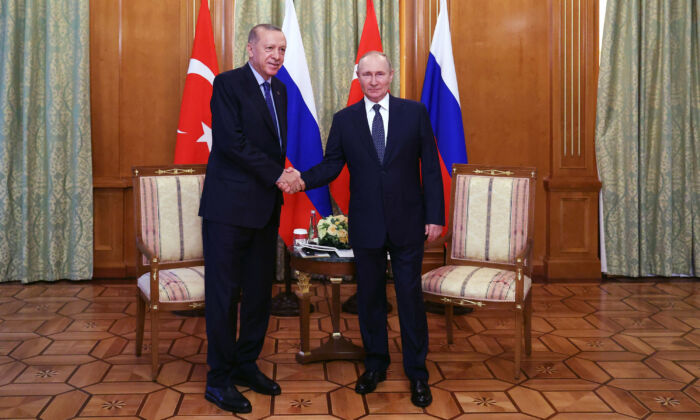 ANKARA, Turkey—A recent meeting in Sochi, Russia, between the leaders of Russia and NATO member Turkey has reportedly sparked fears among Western officials of perceived “deepening ties” between Ankara and Moscow.

However, experts who spoke to The Epoch Times challenge that assertion, saying the meeting—and its outcome—merely reflect Ankara’s pragmatic approach to its dealings with Russia.

“Since the Ottoman era, Turkish foreign policy regarding Russia has always been one of balancing interests,” said Matthew Bryza, a former White House and senior State Department official.

The apparent meeting of minds that took place in Sochi, he added, “is a continuation of this balancing act.”

During the four-hour meeting, the two leaders discussed regional developments, including the simmering conflict in Syria and recent flare-ups between Armenia and Azerbaijan in the Nagorno–Karabakh region.

But it was understandings reached on the economic front that ended up making headlines.

Along with increasing bilateral trade, they agreed to step up cooperation in a range of fields, including finance, energy, and tourism. They also discussed the Turkish banking sector’s recent adoption of Russia’s MIR payment system, which lets Russian tourists visiting Turkey pay for hotels and make other purchases.

Since March 31, Putin has demanded that “unfriendly countries”—those that support Western sanctions on Russia because of its ongoing war with Ukraine—use rubles to pay for Russian gas.

Turkey, however, isn’t on that list. While Ankara quickly condemned Russia’s “special military operation” when it began in late February, it has refrained from supporting Western-led sanctions on Moscow.

What percentage of these payments would be denominated in roubles, however, “has yet to be decided,” Donmez said.

While returning from Sochi, Erdogan told reporters that Turkey would “hopefully” attend a meeting of the Shanghai Cooperation Organization—at the invitation of Putin—to be held next month in Uzbekistan.

In the days after the Sochi meeting, certain voices in the Western press reported “mounting alarm” over Turkey’s “deepening ties” with Russia.

One prominent newspaper (Financial Times, Aug. 7) backed up the assertion by citing a raft of unidentified “Western officials,” one of whom hinted that Turkey could face financial retribution—in one form or another—if it “gets too close to Russia.”

It wouldn’t be the first time. Two years ago, the United States slapped sanctions on Turkey’s defense industry after Ankara bought a handful of Russian-made S-400 missile defense systems.

But according to Halil Akinci, a Turkish foreign policy expert, purported Western concerns about a Turkish tilt toward Russia—at NATO’s expense—are “completely unfounded.” He also was quick to dismiss the notion that there were any fresh grounds for penalizing Ankara based on the outcome of the Sochi meeting.

“The West is always accusing us, without justification, of moving towards Russia and away from NATO,” Akinci, who served as Turkey’s ambassador to Moscow from 2008 to 2010, told The Epoch Times.

“How can we be accused of moving toward Russia when Turkey is providing Ukraine with advanced Bayraktar drones, which have proved instrumental in the ongoing conflict?” he asked.

“NATO consistently fails to recognize Turkey’s vital security concerns,” he said. “Quite to the contrary, Turkey is the only NATO member to be subjected to periodic sanctions and arms embargoes by its own allies.

“This has forced it to adopt a pragmatic approach to Russia, which is a formidable neighbor.”

Bryza, who sits on the board of the Jamestown Foundation, a Washington-based think tank devoted to defense policy issues, agreed.

“I don’t think, by any means, that there’s been a tilt [by Turkey] toward Russia away from NATO or Ukraine,” he said. “There’s always a ‘push-pull’ in Turkey–Russia relations, and this latest set of agreements—including Turkey’s willingness to conduct trade with Russia in roubles—reflects that.

“This is merely Turkey being transactional in a way that upsets others in the NATO alliance.”

It’s precisely this “transactional” approach to its dealings with Moscow that has allowed Turkey to mediate—not without some success—between Russia and Ukraine, according to Akinci.

Last month, Ankara helped broker a landmark agreement between the two warring countries that allowed Ukraine to resume grain shipments through the Black Sea. As a direct result of the deal, 16 wheat-laden cargo vessels have so far departed for markets abroad from Ukrainian seaports, Turkey’s Defense Ministry confirmed on Aug. 13.

“Turkey’s approach today, as in the past, is to cooperate with Russia when it’s advantageous, and resist Russian expansionism when it’s necessary,” Bryza said.

“Turkey is always looking, in a totally transactional way, to ‘make Turkey great again’ by adopting a ‘Turkey first’ policy,” he added. “And this means maintaining extensive economic cooperation with Russia.”