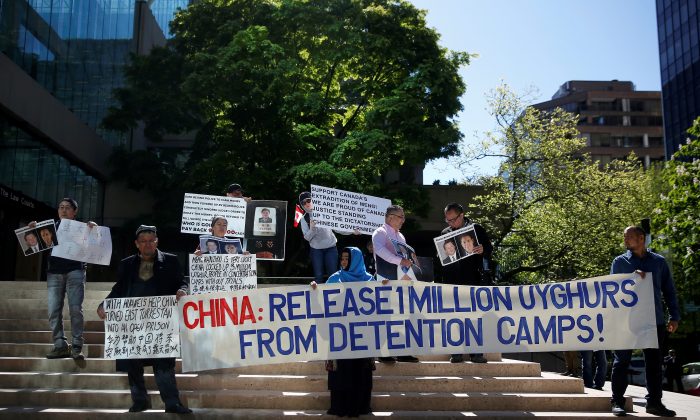 West, Japan Rebuke China at UN for Detention of Uyghurs

GENEVA—Nearly two dozen countries have called on China to halt its mass detention of ethnic Uyghurs in Xinjiang, the first such joint move on the issue at the U.N. Human Rights Council, according to diplomats and a letter seen by Reuters.

U.N. experts and activists say at least 1 million Uyghurs and other Muslims are held in detention centers in the remote western region. China describes them as training centers helping to stamp out extremism and give people new skills.

The unprecedented letter to the president of the forum, dated July 8, was signed by the ambassadors of 22 countries. Australia, Canada and Japan were among them, along with European countries including Britain, France, Germany and Switzerland.

It fell short of a formal statement being read out at the Council or a resolution submitted for a vote, as sought by activists. This was due to governments’ fears of a potential political and economic backlash from China, diplomats said.

“It is a first collective response on Xinjiang,” a Western diplomat told Reuters on July 10. “The idea of a resolution was never on the cards.”

Another envoy said: “It’s a formal step because it will be published as an official document of the Council … It is a signal.”

The letter voices concern at reports of unlawful detention in “large-scale places of detention, as well as widespread surveillance and restrictions, particularly targeting Uyghurs and other minorities in Xinjiang.”

It pointedly cites China’s obligations as a member of the 47-member state forum to maintain the highest standards.

“We call on China to uphold its national laws and international obligations and to respect human rights and fundamental freedoms, including freedom of religion or belief in Xinjiang and across China,” the letter said.

“We call also on China to refrain from the arbitrary detention and restrictions on freedom of movement of Uyghurs, and other Muslim and minority communities in Xinjiang.”

Bachelet highlighted abuses in Xinjiang during her opening statement given on June 24. She said she would continue to raise the issue bilaterally with China, including requesting unfettered access to the region.

Previously, China’s ambassador to the U.N. said it welcomed Bachelet to visit, but her office responded that she would not accept the invitation unless given access to the internment camps on her own terms.

No Western delegation was willing to take the lead and expose itself as a “ringleader” through a joint statement or resolution, diplomats said. China’s delegation is “hopping mad” at the move and is preparing its own letter, a diplomat said.

At the start of the three-week session, which ends on July 12, the Xinjiang vice-governor responded to international condemnation of state-run detention camps by saying that they were vocational centers which had helped “save” people from extremist influences.

However, inside the region’s network of internment camps dubbed “vocational training centers,” Uyghurs and other Muslim minority detainees are forced to undergo political indoctrination and denounce their faith. Former detainees have reported cases of torture, forced medication, and rape.

Under the pretext of combating “extremism,” the Chinese regime has launched an expansive crackdown on the Uyghurs and other Muslim minorities in the region.

“The joint statement is important not only for Xinjiang’s population, but for people around the world who depend on the U.N.’s leading rights body to hold even the most powerful countries to account,” said John Fisher, Geneva director at HRW, in response to the joint letter.

“Beijing is wrong to think it can escape international scrutiny for its abuses in Xinjiang, and the pressure will only increase until these appalling abuses end,” Fisher concluded.

Dolkun Isa, president of the Munich-based rights group World Uyghur Congress, expressed appreciation to the 22 nations and said that the joint letter showed that “China has failed to deceive the international community with its lies by bringing Erkin Tuniyaz to whitewash its repressive policies,” according to Radio Free Asia.

Erkin Tuniyaz, Xinjiang’s vice governor, told the Council on June 25 that China had contained terrorism and religious extremism in Xinjiang, according to Reuters. This is the Chinese regime’s stated rationale for rounding up Uyghurs in the camps.

Following Tuniyaz’s statements, the U.S. Mission to the U.N. issued a statement, saying, “The Xinjiang vice-governor’s use of the Human Rights Council as a platform to defend Beijing’s repressive policies is inexcusable.”

In March, Pompeo met with a Uyghur survivor of the camps, and three other Uyghurs whose relatives have either been detained at the camps or criminally sentenced in China.

The provision requires that the U.S. Director of National Intelligence Dan Coats submit to congressional intelligence committees a report on activities by Beijing to repress ethnic Muslim minorities in Xinjing, no later than 150 days after the Act’s passage.