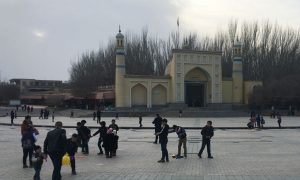 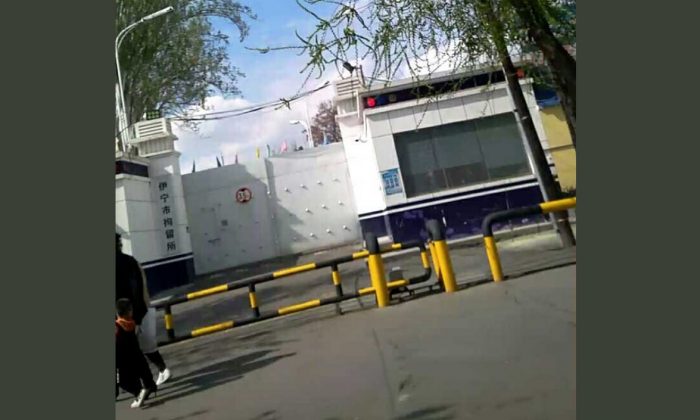 Photo of a compound believed to be a detention center in Xinjiang, China. (Kasim/Twitter)
Chinese Regime

The Chinese Communist Party (CCP) is scanning Xinjiang residents’ phones for foreign social media apps and throwing those with the apps into Xinjiang’s vast network of “vocational re-education centers,” according to a Uyghur living in the region who says he has risked his life to share photos of the facilities on Twitter.

“If you got Twitter or Facebook in your phone, you will be sentenced to 15 years in concentration camps,” he said.

Kasim, who claims to be a Xinjiang resident, posted a series of photos on April 7 of buildings he believes are some of the detention facilities where over 1 million ethnic Uyghurs are being held.

“Everywhere are monitors. These monitors are helping China to send people into Camps. When I took a picture, a Chinese police looked at me, he was checking other’s phones [sic],” Kasim tweeted.

The CCP has been justifying an escalating crackdown on the Uyghurs and other ethnic minorities and religious believers in China as a way to “educate and transform” its citizens. Uyghurs in Xinjiang are deemed by the communist state as being at risk of the “three evil forces” of “extremism, separatism, and terrorism.”

“We used to pray for our God after meals. They said ‘Only Terrorist will pray for God!’ Now, if you pray in public, or if you say ‘Amin,’ you will be sent to Concentration camps [sic],” he tweeted.

Kasim continued to describe life in Xinjiang as being like “living in Nazi Germany” as he posted the co-ordinates of several locations where he believes the regime is running detention centers.

“This used to be a hospital, but China Fascist changed it to a Concentration camp. It used to included 7,000 people in total. It is now abandoned,” he wrote.

There are growing reports that Xinjiang authorities are detaining Uyghurs for making political or religious digressions on foreign social media apps such as Facebook or Twitter.

Their devices are forcibly scanned at checkpoints around the region by officers tasked with policing for material that the CCP deems suspicious, the Guardian reported.

Access to foreign web services such as Facebook and Twitter have been banned in China by the CCP since mid-2009, following civil unrest and riots in Xinjiang’s capital Urumqi, that authorities say were abetted by the sites.

But according to political observers, officials from the faction loyal to former CCP leader Jiang Zemin fomented ethnic tensions between Uyghurs and the majority Han Chinese in order to create a political dilemma for Xi’s leadership. The Epoch Times previously reported that the Xinjiang region has been a stronghold for the Jiang faction since 2002.

The repression of Uyghurs has only intensified in recent times. Now, mandatory spyware is installed onto every citizen’s phones to monitor and restrict their access to foreign sites. The spyware app named Jingwang Weishi, meaning “web cleansing,” monitors everything that is said, read, and written, as well as who people contact on their smartphones, BuzzFeed News reported.

“Any user with this app installed will have every file stored on their device sent to a unknown entity for monitoring,” U.S. State Department-backed Open Technology Fund said in a blog post.

“We live in terrify. It is believed that this is just the first round of closing people in camps. There are also second round, third round…..until everyone of us suffer Concentration Camps and Brain Wash [sic].

“We can’t hold revolution here. Because China wants a reason to kill us all,” Kasim said.

The CCP has continued to push its narrative that what are believed to be mass-detention centers are actually facilities that provide “vocational skills” training for detainees, where they learn about things such as sewing and baking.

It publicly admitted their existence in October 2018. However, a former detainee told The Epoch Times, “They are lying through their teeth,” adding that she “never saw a single classroom.”

The crackdown on Uyghurs accessing blocked sites such as Facebook and Twitter is an attempt by the CCP to control the narrative on the mass interment of Uyghurs, according to Uyghur Human Rights Project (UHRP) senior researcher, Henryk Szadziewski.

“For a Uyghur the discovery of these apps on your phone is potentially dangerous due to the tight lid China maintains on information in Xinjiang and the frequent checks of content on phones,” Szadziewski told The Epoch Times.

“It’s a further illustration of the state’s deployment of technology to monitor and limit Uyghurs’ personal lives and any remaining semblance of expression outside of government confines.”