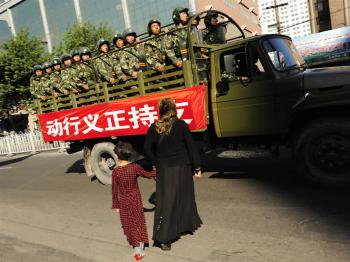 After the regime occupied Xinjiang, it created racial division and hatred. The public should clearly see its tricks, and the real evil insidious one is the Chinese communist regime. (Peter Parks/AFP/Getty Images)
Opinion

Ming Yan
biggersmaller
Print
The Uyghur uprising has temporarily been suppressed. Many Chinese are fooled by the Chinese communist regime and think it did a good job keeping the situation under control. They believe that China needs a strong ruler despite the regime’s ruthless trampling of Chinese people’s human rights over the years. Actually, the whole incident shows the evilness of the regime and its devious nature.

The uprising in Xinjiang was triggered by the Uyghur and Han Chinese conflict in southern China’s Shaoguan City, Guangdong Province, over an article posted on a blog saying six Uyghur raped two Chinese girls, which later proved to only be a rumor. However, two Uyghur were killed and over 100 were wounded during the conflict.

Initially, the Uyghur in Xinjiang were just protesting against the regime for taking the Han’s side when handling the Shaoguan incident, but the Han people have been successfully misled by the regime. As a result, the situation transformed into a violent conflict between both ethnic groups.

In fact, both Uyghurs and Hans are the innocent manipulated victims of the regime. To date, the regime has successfully shifted elsewhere the people’s discontent towards it. The hatred between the victims (Han and Uyghur) in this incident has intensified, and the local Han have been turned into grateful pawns of the Chinese Communist Party (CCP). This is precisely the ultimate objective the regime planned to achieve.

The Root and Cause of the Incident

The Han race and other ethnic minority groups have lived in harmony in Xinjiang for centuries. However, this changed when the communist army entered Xinjiang in May 1962. The regime’s general, Wang Zheng killed thousands of Uyghur with machine guns when they protested against the Han people’s mass migration into their land, which lead them into poverty. Because of the massacre, about 150,000 to 200,000 local people fled from Xinjiang, according to the regime’s own documents.

For decades, the regime has continued to ban Uyghur schools, arrest Uyghurs, burn their religious books, and persecute their religion. The Uyghurs carry deep resentment against the regime. However, it is difficult for them to separate the regime from the Han race, even the majority of Han people have suffered under the regime’s rule.

Under the regime’s rule, the Uyghurs also suffered miserably from party corruption, economic downturns, unemployment, and poverty for years. The locals have to pay higher fees for natural gas than Shanghai residents, even though Xinjiang has the nation’s largest natural gas reserve, and other natural resources which include oil, cotton, gold, and jade. For years, these have been shipped inland, but the local ethnic youth must work as laborers several thousand kilometers away from home (Shaoguan in Guangdong Province is 4,000 kilometers away from Xinjiang) as they are more vulnerable compared to the better educated Han people in the local job market.

The Uyghurs were very dissatisfied with the regime after the Shaoguan incident. There were on line reports that over 3,000 train passes (from Xinjiang to Shaoguan) were purchased and on-line posts called for a Uyghur street protest before the July 5 event.

All these signals were definitely on the regime’s radar screen. Despite this knowledge, at 5 PM on July 5 when the Uyghurs protested on the streets, there was no deployment of any preventive measures or traffic control from the regime. It is absolutely inconsistent with past responses.

After July 5, the regime should have been fully on guard. However, the Uyghurs’ street demonstration was once again seen on July 6 with violent activities including beatings, smashing property, and burning. Looking back at the Tiananmen Student Movement 1989 and the Tibetan Uprising in March, both incidents have been officially classified as riots. However, people disclosed it was staged by the regime’s plainclothes police and soldiers acting as everyday people to create chaos in both cases. One cannot help but suspect that the regime’s involvement in instigating and misleading the crowd then taking advantage of their anger and emotions transformed their resentment and anger against the communist regime into the destruction of public property and attacking the Han community. In the end, a violent riot between the two ethnic groups erupted.

Is it that the regime could not control or stop the conflict? Absolutely not! Urumqi is a city surrounded by troops, stationed there with extensive military capacity. The Xinjiang Military is classified as a deputy military region, and its headquarters is located in Urumqi. Heavy military forces are stationed around Urumqi City. There are the air force, motorized infantry divisions, an artillery brigade, engineering companies, it is an independent military unit. In addition, the Shuimougou District of Urumqi has tank and mobile regiments. Also stationed there are the Xinjiang Armed Police Corps I, II, III, Urumqi Militia detachment, and the Urumqi People’s Armed Police Command College. There are also several armed police detachments, armed police corps headquarters, a public security special police detachment, and police schools. The armed force’s power is indisputably strong enough to control any incident before it even starts. However, the regime remained silent.

It was reported that the regime’s armed police general commander, Wu Shuangzhan visited Urumqi on July 8. He met 800 armed police officers in People’s Square and announced a promise to demonstrate their strength. What puzzles me is that a riot of such a large scale that attracted worldwide attention had taken place at 5 PM on July 5 and intensified once again the next day with numerous deaths and injuries without any intervention. Why did it take Wu two days to muster his troops? It would only take 5 to 6 hours at most to bring the situation under control with their resources near by.

Didn’t Premier Wen Jiabao arrive in Dujiangyan just two hours after the devastating Sichuan earthquake in May 2008? Even if not in person, he could have ordered the dispatching of troops to control the situation. For whatever reason, Wu waited until the ethnic hatred reached its flash point and did not arrive until the morning two days later.

Looking Back at History

Throughout its history, inciting hatred, killings, and creating terror are the usual means the Chinese Communist Party used to maintain its violent rule. The Tiananmen Square Massacre, the suppression of Falun Gong, the crack down of the Tibetan uprising and so on. The way mass incidents are handed by the regime are identical — first incite hatred, then second, stir up the anger among the public, and third, follow with a bloody crackdown.

Currently, group protests are everywhere in China, the regime itself knows this all too well and predicted 2009 as a mass incident year. In June alone, there were six large protests across China, the largest one involved over 10,000 people and over a dozen police vehicles were damaged. All these crises make the regime feel like its sitting on a powder keg. The civil awakening and long time simmering public anger shown in these incidents also frightens it.

Under such circumstances, the regime is looking for an excuse to create an atmosphere of terror to secure its ruling position, just as it did in the Tiananmen Square Massacre. However, firing openly like it did in on the students at Tiananmen Square will only create more public resentment and then speed up its demise. Inciting ethnic hatred and creating riots becomes the next logical step for the regime because it has fanned nationalism since it took over control of China, and the ethnic conflicts between Han and other minority races is a long standing issue.

In reality, this trick has brought the regime big returns. Though most of the time, the author can’t contact people inside Urumqi due to the information blockade, however, when contact can be made, I notice obvious changes. Before the incident, people cursed the regime with resentment; thereafter they follow the official tune and praise the armed police for keeping everything under control. Some people even naively believe the regime’s excuse for an information blockade, such as cutting off Internet and telephone communications, were a necessary step to prevent “oversea malicious forces from manipulating the situation.”

In fact, if one looks back at all the past incidents, from the Tiananmen Square Massacre, to the persecution of Falun Gong, to the devastating Sichuan earthquake just before the Beijing Olympics, melamine contaminated milk products, and the uprising in Shishou in central China in June, we see the same tactic.

After the ethnic conflict happened on July 5, all communication and Internet connections were cut off, and the real recordings about the incident published by the Chinese bloggers were deleted. All the Chinese media use the news issued by the authorities to unify all thoughts and voice.

The Xingjiang incident also reminds me that when Zhu Rongji was premier, he went to Xinjiang for an inspection. Coincidently, there was an explosion in an ammunition vehicle in Urumqi. The Xinjiang regime issued a notice to all departments in Urumqi that no one can accept an interview from journalists outside the party’s control. They must unify the thoughts, unify the voice, and unify the number of deaths as 63 people. However, according to witnesses, the vehicle was loaded with military weapons. The explosion occurred near a bus station. Two buses loaded with passengers from southern Xinjiang and nearby restaurants, shops, and pedestrians were all blown away. Hundreds of the people died. After the explosion, there were body parts everywhere. When the armed police and soldiers cleaned up the site it was too ghastly to behold. However, after the news coverage, few people knew what really happened.

Cover-up the truth so the regime can play its tricks in the dark. Fabricate lies so it can deceive, brainwash, and fool the public. In the large-scale uprising in Xinjiang this time, the regime could even take advantage of the tragedy that cause one thousand people’s lives to meet its needs. Thus we can see its insidious nature, one of utter disregard for human life and damaging the Chinese race.

Therefore, I make an appeal here. The Han and Uyghur races have lived in harmony for a long time in history. After the regime occupied Xinjiang, it created racial division and hatred. The public should clearly see its tricks, and the real evil insidious one is the Chinese communist regime. The Han and Uyghur races should understand the regime is behind all these tragedies, as stated in the “Nine Commentaries on the Communist Party.” Don’t keep any illusions about the Chinese Communist Party. Only by quitting and disintegrating the CCP will China and the Chinese nation have a good future.