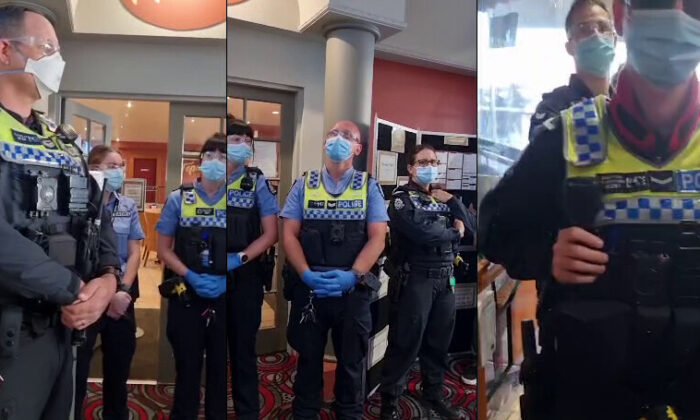 West Australian Police Shut Down Restaurant for Having Unvaccinated Staff

Western Australia (WA) Police have closed a family restaurant in Perth after a member of the public reported the venue had unvaccinated staff.

WA has one of the nation’s broadest proof of vaccination requirements, with all staff and patrons required to be fully vaccinated to enter hospitality, entertainment, and fitness venues. In addition, visitors to aged care facilities and hospitals will, for the most part, also need to be vaccinated.

WA Police told The Epoch Times in an email that officers attended the Topolinis Caffe in Warwick before trading hours at around 1 p.m. on Feb. 7, with the owners and members of the staff told they were not permitted to work unless they were fully vaccinated.

However, police found the store open upon returning later that evening, eventuating in the arrest of the restaurant owner and her daughter, who were charged with breaching the Emergency Management Act.

Three other people were given infringements.

The Emergency Management Act defines rules during a state of emergency which takes precedence over all other laws and grants WA Police sweeping powers within an emergency area. A state of emergency was declared in WA on Mar. 16, 2020, following the onset of the COVID-19 pandemic.

Under these powers, police are allowed to close a place of business, worship, or entertainment; break and enter into a place or vehicle; demolish or destroy a vehicle or premise; disconnect electricity, gas, water, or fuel supply; and more.

The restaurant owner and her daughter were released from police custody that same night.

“A mother and daughter—and we were in a cell,” Jodie, the restaurant owner, said in a video by the Scorpion Media Group YouTube channel on Feb. 8.

“I’m not sure what’s gonna happen with the restaurant and my staff, my 20 staff that I have that rely on me for their pay.”

The WA government has previously been criticised both internationally and domestically for enacting one of the strictest vaccination mandates in Australia.

Events that have drawn criticism include halting a church service to enforce mask-wearing, banning unvaccinated lawyers and jurors from courtrooms, and using slurs against the state’s unvaccinated residents.

WA Premier Mark McGowan had given a clear warning to the state’s unvaccinated residents directly: “Life is about to get very difficult for you.”

But McGowan has stated the decision to enforce a wide proof of vaccination rule has been to ensure the safety of the state’s residents, particularly as cases of Omicron balloon over in the eastern states.

“What we’re trying to do is make sure we reduce the death rate as much as possible because by getting more vaccines out there, by having better arrangements in place, not only do you save lives, but you also save jobs,” McGowan told 6PR on Feb. 2.