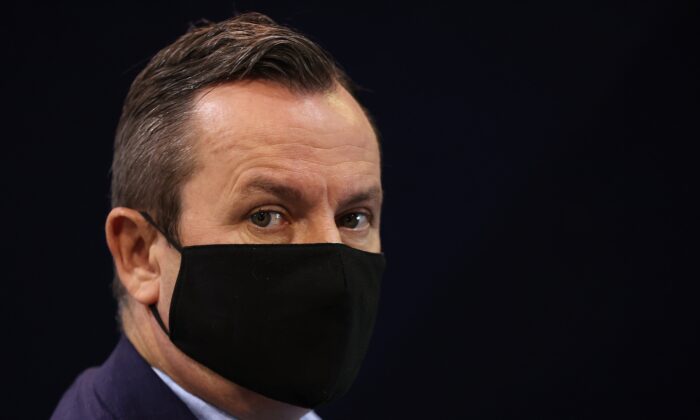 Western Australia Premier Mark McGowan during a press release at the COVID-19 Vaccination Clinic in Claremont, Perth, Australia on May 3, 2021. (Photo by Paul Kane/Getty Images)
Australia

Western Australia (WA) Premier Mark McGowan has given a clear warning that unvaccinated residents will suffer the consequences of vaccine passports once border restrictions ease next month.

“If you, for some reason, have not had your first dose yet my advice would be to make a booking today, otherwise life is about to get very difficult for you,” McGowan told Western Australians on Jan. 10.

Currently, 86.3 percent of the state’s 12-and-over population has been fully vaccinated. Out of those between 16 and 49 years of age, nearly one in every ten has yet to receive one dose of the vaccine. This grows to more than one in every four in those aged 12 to 15.

The sizeable number of unvaccinated residents throughout WA comes despite sweeping vaccination mandates, with more than 75 percent of the state’s workforce—equivalent to over a million workers—needing to be fully vaccinated.

Proof of vaccinations is also required for pubs, taverns, hotels, and major events with a capacity of more than 500, with restrictions being put in place after the state recorded two cases of community transmission of the CCP virus.

However, McGowan has promised that over the next few days a longer-term vaccine passport system will be released and will cover a wide range of new venues, including restaurants and indoor fitness centres.

He added that unvaccinated individuals faced being locked out of the Pilbara—a region home to many of the state’s most prized tourist attractions—given the vaccination rate in the region is well below 60 percent.

McGowan explained that the heightened measures came ahead of the state’s reopening, with border restrictions easing from Feb. 5.

“This policy will come into force as we move closer to easing border controls,” McGowan said.

Once borders ease, fully vaccinated travellers will no longer need to undergo mandatory quarantine if returning a negative test result for COVID-19, but those who are unvaccinated will remain barred from entry.

The premier justified the strict measures given that those who have not received the jab are much more likely to present to hospital with COVID-19 than those who are fully vaccinated.

“We know that unvaccinated people are well and truly enormously over-represented when it comes to cases, serious illness, hospitalisations, intensive care presentations and deaths,” he said. “Far too many resources are being used over east to care for individuals who would not take the basic steps to care for themselves.”

According to data from the New South Wales (NSW) COVID-19 Critical Intelligence Unit, as of Sep. 28, 2021 the state saw COVID-19 hospitalisations dominated by unvaccinated individuals, with 66.9 percent of patients being unvaccinated—despite making up less than 10 percent of the state’s population.

However, the admittance of fully vaccinated Australians presenting with COVID-19 has gradually increased as vaccination efficacy has waned against the newer Omicron strain of the virus.

In particular, in January, NSW for the first time saw the number of fully vaccinated presenting with COVID-19 surpassed the unvaccinated, though the unvaccinated are still largely over-represented given their population.

According to NSW Health, 93.7 percent of the state residents aged 16 and over have been double vaccinated, while 78.1 percent of the 12 to 15 cohort have received two doses of a COVID-19 vaccine.