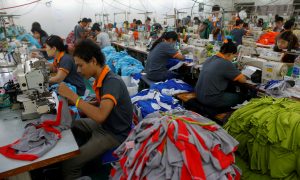 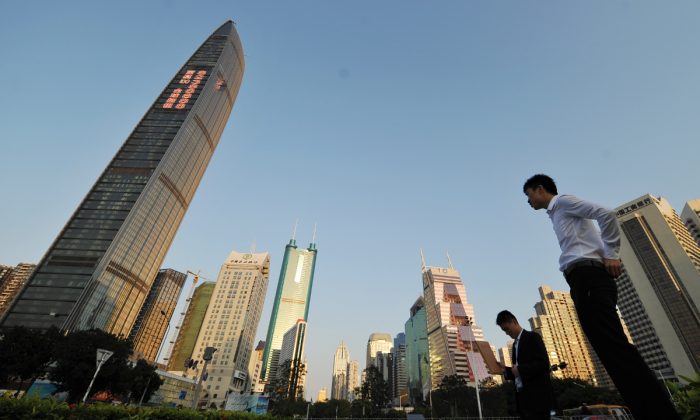 After Chinese leader Xi Jinping’s visit to Shenzhen two weeks ago, in which he emphasized the city as an engine to drive up the economy of the Guangdong-Hong Kong-Macau Greater Bay Area, locals have raised concerns to The Epoch Times that factories continue to move out or close down in the industrial zone.

Some analysts say this indicates that the “internal economic circulation” strategy promoted by Xi will not be enough to replace the export orders that have been fueling Shenzhen’s growth.

Businesses in the Greater Bay Area had hoped that export orders for the upcoming holiday season would rejuvenate the economy. However, the holiday orders that characterized previous years have yet to be seen.

An online video captured the empty streets of a local industrial park in Bao’an District, Shenzhen—a place once bustling with people both offering and looking jobs. The video showed a few laid off workers pointing to empty factories that have recently been closed down.

Netizens commented that the city, which used to be a world-class factory, now sees factories having to close permanently on a daily basis.

Wu Xin (alias), manager of a Guangdong food supply and marketing company, told The Epoch Times that many industrial zones in Guangdong and Shenzhen are experiencing depression.

Since April and May this year after the COVID-19 outbreak, a large number of businesses, such as hotels, stores, and factories, have declared bankruptcy. Even the popular and lucrative jade and jewelry factories in Guangzhou Province’s Shantou city have closed down or moved away.

Wu Xin said the driving factor behind the exodus is high wages and high rents. Commercial rent, especially for second and third-hand sublet workshops, are not decreasing despite the economic downturn, leaving companies unable to maintain operations.

Mr. Zeng, a migrant worker from Jiangxi Province just north of Guangzhou who works in the home cleaning industry, has experienced the many up and downs of the Chinese economy. But he said that the negative economic situation has become more obvious to him recently.

“Because of the downturn in the industry, many people have less income. It also has affected my work and my income. In October this year, my income was about one-third to one-fourth less than last year,” Zeng said.

The Epoch Times previously reported that since the start of U.S.-China trade negotiations, foreign companies have been flocking out of China.

Zeng said that the relocation of factories has had a greater impact on those earning the lowest income.

“Many ordinary workers are facing unemployment,” he said. “If the factory is gone, low-end workers will be in trouble.”

Taiwan based economist Wu Chialung told The Epoch Times that the survey results indicated that China has been losing foreign orders, especially those from the U.S. market. At the same time, domestic demand cannot fill the void left by the drop in overseas demand.

“This reflects that the internal circulation [strategy of Xi] is under a lot of pressure. Domestic demand is not enough to make up for the loss of foreign orders. Weighing the deterioration of the overall business environment in the area, companies can only choose to withdraw,” Wu Chialung said.

When asked whether he has seen any support from the business community for Xi’s policies, Wu Xin said no, adding that businesses in Shenzhen had not received any support after Xi’s visit.

Wu Xin added, “The people here are generally pessimistic. The worst case is the internal circulation [strategy]. Then the country will become another North Korea.”

“People worry about returning to the era of the ‘People’s Commune’ and ‘the Supply and Marketing Cooperative,'” he said. The cooperative was an era that lasted from the birth of communist China until the reform and opening-up of the economy in 1978, during which the communist government tightly controlled the economy and people lived in poverty.

Chen Han and Lin Cenxin contributed to this report.