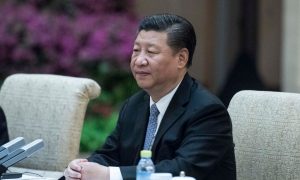 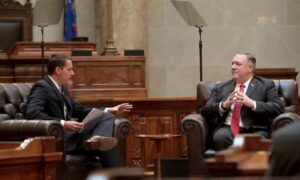 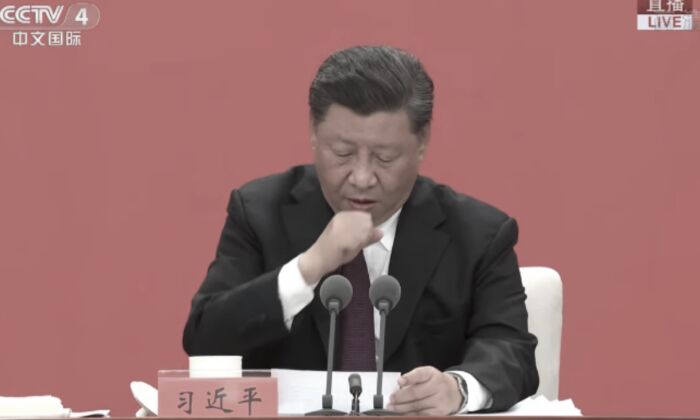 Chinese leader Xi Jinping is coughing while delivering a speech at an event marking the 40th anniversary of the establishment of the Shenzhen Special Economic Zone in Shenzhen, China, on Oct.14, 2020. (Screenshot/CCTV YouTube Channel)
Chinese Regime

On the 40th anniversary of China establishing its first special economic zone (SEZ)—which paved the way for capital market reforms to be introduced—Chinese leader Xi Jinping hinted at the severity of economic challenges ahead.

In 1980, the Chinese regime designated its first four SEZs in Shenzhen, Zhuhai, Shantou, and Xiamen cities. Compared with the other three, Shenzhen in southern China benefited from trade with and investment from Hong Kong, just across the border.

However, Xi did not make much mention of Hong Kong.

In addition, Xi kept on coughing while delivering his speech, attracting speculation about whether he has COVID-19.

On Oct. 14, a ceremony to mark the anniversary was held at the Qianhai International Convention Center in Qianhai, a pilot free-trade zone set up in Shenzhen in 1980.

Xi gave a 50-minute speech, in which he listed economic achievements in Shenzhen and spoke of plans for the city’s further development.

However, he failed to note China’s inflation in the past 40 years. The central government does not disclose inflation figures.

Xi mentioned that China was currently facing difficulties, and asked the city to “improve its economic quality.”

Xi first arrived in the southern region on Monday.

While visiting an electronic component and materials manufacturer in Chaozhou city, Guangdong Province, Xi similarly said in a speech that the country faces a historical level of “instability,” and urged companies to take a path of “self-reliance.”

Similar to the concept of “economic internal circulation” proposed by Beijing in July, it calls for the country to produce all the goods it needs domestically, from obtaining raw materials to manufacturing.

The call for self-reliance emerges as China faces export restrictions, economic sanctions, and pressure from trading partners to open up its markets.

Before Xi embarked on his trip, the central government also issued a development plan for Shenzhen from 2020 to 2025, whereby the city will become a “model” for economic reforms.

The plan called for setting up new ways to attract foreign investment; issuing more land to companies (in China, all land is owned by the government and then leased out to individuals or entities); and opening up to the private sector industries that are monopolized by state-run companies, such as energy, telecom, and transportation.

But some Chinese citizens were not optimistic about the plan.

One Beijing resident who wished to remain anonymous said that the Chinese regime’s stifling of freedoms in Hong Kong has spooked international firms that have a presence in the financial hub. Then, given that Shenzhen is in the mainland, “How can foreign investors feel safe about their investments in Shenzhen?” he said in a phone interview.

“If there is any commercial dispute, [companies think that] the Chinese judicial system won’t judge the cases fairly,” Li said.

Unemployment amid the pandemic is also a top concern for Beijing. At an economic seminar held in Beijing on Monday, Chinese premier Li Keqiang spoke of people who are having difficulty making a living, including unemployed college graduates, migrant workers, and people impacted by severe flooding earlier this year.

After Shenzhen became an SEZ, it became a window into foreign investment via Hong Kong, a former British colony that returned to Chinese sovereignty in 1997. Despite growing encroachment from Beijing, the territory maintains a level of economic freedom.

That is comparable to the amount of investment from Hong Kong into all of mainland China: 72 percent of China’s foreign direct investment is funneled through Hong Kong, according to China’s commerce ministry statistics.

However, Xi did not talk about Hong Kong’s contribution to Shenzhen’s development in his speech. He only mentioned Hong Kong once when he said Shenzhen should lead the cooperation between the mainland and Hong Kong and Macau, a former Portuguese colony that returned to Chinese rule in 1999.

Notably, during the ceremony, Hong Kong’s top official Carrie Lam was sitting at the right-most seat in the back row—in an obscure corner of the venue.

The broadcast clearly showed that Xi coughed four times and could not speak for several seconds on three occasions.

The live-broadcast switched the footage from Xi to the audience once Xi started to cough. The sound of Xi drinking water to relieve his coughing could be heard clearly throughout, but the broadcast did not show the footage.

After the event concluded, CCTV deleted the video from its YouTue channel. State-run outlet Macau Daily posted the video on its YouTube channel, but replaced Xi’s coughing scenes with shots of the audience. The sounds of Xi’s coughing and drinking water can also be heard.

Xi’s coughing triggered speculation among overseas Chinese-language media about his health condition, as the city of Qingdao was experiencing a new wave outbreak of COVID-19. On Oct. 12, Xi visited Chaozhou city and talked to people without wearing a facial covering.