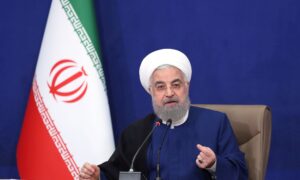 Water Supply Undrinkable in Iraqi City as 5 Killed Amid Protests

It began on Sept. 3, when a man, Yasser Maki, was killed in demonstrations demanding the local administration fix a problem with the water system in Basra, Iraq’s second largest city. A funeral procession for Maki on Sept. 4 turned into a demonstration.

Basra residents say salt and bacteria as well as other chemicals seeping into the water supply has made it undrinkable. The contaminated water supply has sent 20,000 people to hospital, according to France 24; proof, the residents say, that infrastructure has been allowed to collapse in the part of the country that produces most of its wealth from oil.

Protesters are angry over electricity outages during the hot Iraqi summer, a lack of jobs and proper government services, and entrenched corruption.

Twenty-two members of the security forces were also wounded, some by a hand grenade, local health and security sources said, in some of the worst unrest that has swept the long-neglected south—the heartland of Iraq’s Shi’ite Muslim majority—sparked by negotiations to form a new government that continue to drag on since the May elections.

As the clashes continued to unfold, Iraqi Prime Minister Haider al-Abadi convened an emergency cabinet meeting to discuss the unrest and ordered the Interior Ministry to conduct an immediate investigation into the protests, state media reported.

Security forces fired live rounds in the air as well as teargas to try to disperse the crowd, local sources said. Smoke could be seen billowing from the outer perimeter of the provincial government headquarters, where many had gathered earlier on Sept. 4 to mourn a protester who died on Monday night, Sept. 3, Yasser Makki.

The crowds near the government buildings had largely dispersed by 11 p.m., after a citywide curfew was imposed by the city’s security officials.

Iraq’s second biggest city, Basra is a stronghold of Moqtada al-Sadr, a Shi’ite cleric and former leader of anti-American sectarian militia who has recast himself as an anti-corruption campaigner.

In a tweet, Sadr appeared to back the protesters, condemning the tactics used by some members of the security forces against who he said were “unarmed demonstrators who only want to live with dignity”.

The public anger has swelled at a time when politicians are struggling to form a new government after an inconclusive parliamentary election in May. Iraq’s top Shi’ite cleric Grand Ayatollah Ali al-Sistani has expressed support for the protests.

Earlier on Sept. 4, mourners carried Makki’s body near the building, chanting “Yasser’s blood will not be lost”. They damaged the gate of the local government building but were dispersed by security forces using teargas before they could enter it.

Earlier on Sept. 4, Abadi had ordered an investigation into Makki’s death during his weekly press conference.

“Our orders are clear in banning the firing of live ammunition during demonstrations,” Abadi said.

He suspended the electricity minister last month, saying his government had begun punishing those responsible for poor services in Basra.