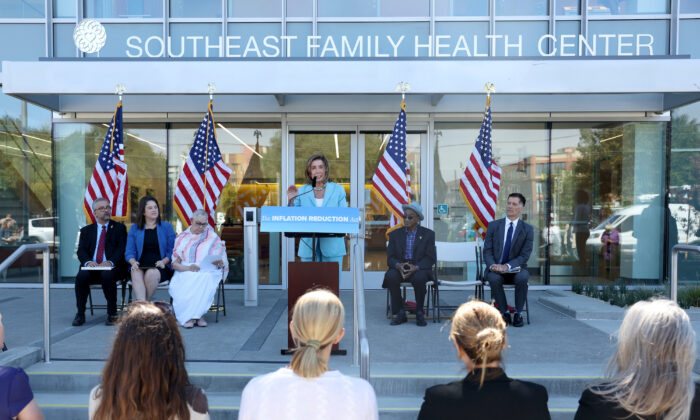 Health care rules do little for inflation but have ill effects

This article is the last of a three-part series on the new Inflation Reduction Act (IRA), which takes up the proposed new health care rules in which the government lodges its inflation reduction claims. The first part of this series examined the law’s lavish spending on green initiatives. The second part assessed its dubious revenue claims.

Here, the discussion points out the harm the health care parts of the bill might cause, explaining, in part, why two independent analyses—one by the prestigious Penn-Wharton Budget Model and the other by the nonpartisan Congressional Budget Office (CBO)—concluded that the law would do little to reduce the rate of inflation.

In one way, the health care parts of this law feed inflation by adding to the flow of money from Washington into the economy. The IRA, for example, will limit out-of-pocket costs for Medicare patients to $2,000 and eliminate the 5 percent coinsurance that Medicare prescription drug enrollees must currently pay. Furthermore, it will hold Medicare drug premium increases to a maximum of 6 percent a year and add a cost-sharing provision for insulin products. The law also extends American Care Act (ACA) premium subsidies instituted in the 2021 American Rescue Plan Act. These keep the premiums to, at most, 8.5 percent of a participant’s income. Since none of this changes costs, the law will simply shift the payment to the taxpayer.

Medicare gets the right, through this law, to negotiate drug prices and hold drug price increases to no more than the overall inflation rate. The negotiation might make sense, but a rigid limit at the overall inflation rate penalizes drugs that are genuinely costly to produce and invites drug companies to raise the prices of other drugs faster than they otherwise would. At the very least, the rigid rule on future price hikes will invite companies to set higher launch prices. That hardly serves the public or holds down inflation. A more flexible approach would better serve the needs of both consumers and producers.

Most unsettling is the arbitrary power it grants. It leaves it entirely at the discretion of the secretary of Health and Human Services (HHS) to select which drugs to bring under negotiation. Furthermore, it precludes any judicial or administrative avenue to dispute the secretary’s decision. If a company objects to the price set by HHS or refuses to negotiate, that firm could face an excise tax of 95 percent of the sales of the drug in question. Effectively, the secretary dictates drug prices and has the power to stop the sale of any drug.

There’s much to object to here. No one should have the power granted here to the HHS secretary. Even if he or she were a saint, the language in the bill invites error. It identifies as likely targets drugs on which Medicare spends the most. But outlays could as easily reflect high use—say, because the drug offers a particularly effective therapy—as a high price. Driving down the price of such drugs would effectively punish the maker for producing something especially favored by the medical community. That serves nobody.

Most concerning is how these rules will discourage drug companies from developing new, useful drugs. Although there is no way to countenance price gouging, the rules must allow producers the potential for gain, or they will refuse to go through the expensive process of developing drugs and winning their approval. Without such potential, the nation will miss out on the kinds of pharmaceutical efforts that, in the past, have improved and extended lives in the United States and elsewhere. There are surely compromises that can secure this welcome flow of drugs and, at the same time, protect the public from abuse. The arbitrary power and rigid metrics of this law fail on both scores.

This third part of the series joins the others to explain how flawed this law is, whatever its intentions. True, it will no more ruin the economy than save the planet. Much remains uncertain. The law of unintended consequences always holds sway, especially where large pieces of legislation are concerned. There are, however, three clear effects: Taxes will rise; health care will not get cheaper, but the cost will shift to taxpayers; and the federal bureaucracy will increase, as will Washington’s control over what the economy produces and how it does so.