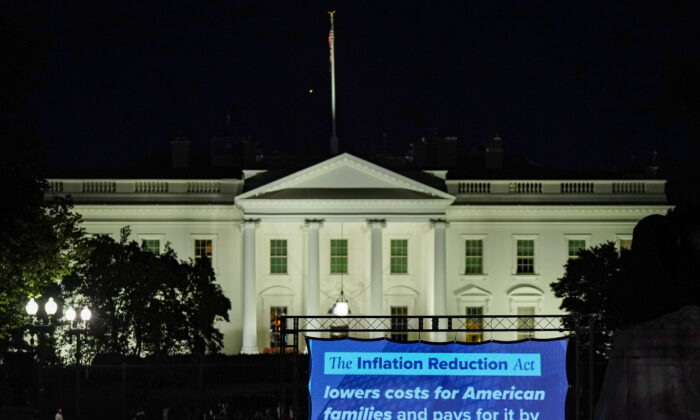 A projection displays information about the Inflation Reduction Act in front of the White House in Washington on Aug. 12, 2022. (Jemal Countess/Getty Images for DNC)
Viewpoints

Its sources of revenue likely won't materialize as expected

This article is the second of a three-part series on the problems with the recently passed Inflation Reduction Act (IRA). The first in this series introduced the act and took up its focus on Washington’s preferred green initiatives.

This second part will take up the revenue sources that the law dubiously claims will more than pay for all the legislation’s spending. These details will better explain why the Penn-Wharton Budget Model and the Congressional Budget Office (CBO) independently concluded that the legislation would do little to narrow the federal government’s budget deficit.

To pay for all its lavish spending plans, this law includes five revenue provisions. The largest of these is a repeal of a Trump-era rule that would have rebated discounts offered by drugmakers. The legislation suggests that this repeal would net the government almost $230 billion in additional revenue over five years, almost one-third of the total revenue haul envisioned in the law. The problem is that these rebates never went into effect. They were postponed several times and even faced a court challenge.

It’s a bit of a stretch to claim additional revenue by repealing an expense that never was.

The second largest source of revenue is the imposition of a 15 percent alternative minimum tax (AMT) on corporations. The bill expects this AMT to raise just under $200 billion over five years. It aims at firms that pay less than the statutory 21 percent largely because they do a lot of capital spending. And under the current law, they can write these expenses and the depreciation of facilities against their earnings. The legislation stipulates that the rule will only apply to corporations with $1 billion or more in profits. It will make this AMT applicable to a U.S. firm’s pro-rata share of earnings from a foreign operation after considering foreign taxes. The law will allow some past AMT payments to count against future tax liabilities.

A third IRA revenue source comes from imposing limits on noncorporate loss extensions. The law suggests that this change will net an additional $65 billion over five years.

Although these measures seem straightforward enough on the surface, their application will impose complexities that raise questions about how much revenue they will raise. To some extent, these complexities prompted the Penn-Wharton Budget Model and the CBO to question the revenue estimate included in the legislation. But there are more significant economic ramifications than just a dispute over calculations.

The complexity added to the tax code will certainly favor large firms, which can afford well-staffed accounting departments, over smaller firms that can’t. The IRA will thus further the drift in U.S. industry toward the domination of fewer giant companies. And though the legislation—by stipulating that the minimum only applies to corporations with $1 billion or more in profits—would seem to burden only large companies, the failure to index this cutoff to inflation means that it will apply to more and more corporations over time.

Perhaps more significantly, the IRA’s implicit limit on the tax advantages of capital spending will discourage spending from improving and enlarging productive facilities generally and, in so doing, slow growth in the economy’s productive potential. That has implications for job growth, and limiting supply will also increase the tendency toward inflation.

The fourth revenue enhancer in the legislation, a 1 percent levy on share repurchases, is expected to net some $78 billion in additional revenue over five years. It seems likely, however, that the revenue gain will fall short of this figure, as corporate managements would use alternative ways to compensate shareholders rather than pay the tax. Regular quarterly or special dividend payouts might serve as stock splits since they tend to raise the value of holdings.

The most suspect part of the plan is the claim that spending some $80 billion to hire some 87,000 new IRS enforcement agents will more than pay for itself and raise $124 billion in additional revenue over five years. While insulting to the honesty of the average American and threatening to bully many people, the claim also has a risible quality. It’s reminiscent of countless past claims that deficits will shrink by eliminating “waste and fraud.”

These proposals have surfaced so many times in the past and have so consistently failed to do what was claimed for them that the phrase and its repeated claims have become a joke.

These five revenue enhancers will undoubtedly raise more money for Washington than would otherwise be the case. The question is whether they will raise enough to pay for the law’s huge, planned outlays, much less enough to close deficits, too. Both the Penn-Wharton Budget Model and the CBO are reasonably skeptical.