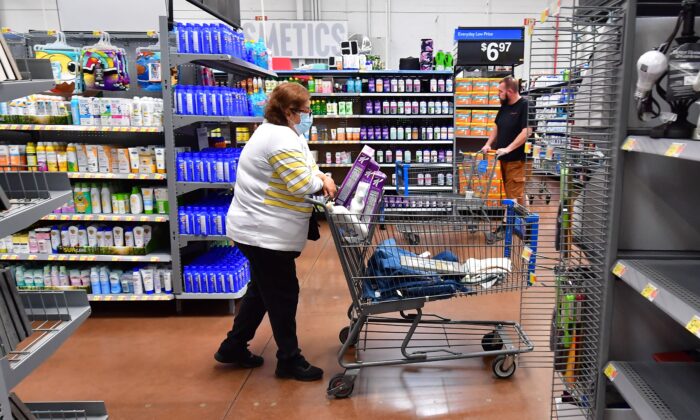 ‘Warning Sign’: Experts React to 1.4 Percent Drop in US GDP

Investors initially reacted positively to the news ahead of a critical Federal Reserve interest rate decision next week.

The first-quarter drop marked a sharp contraction from the 6.9 percent GDP growth the Commerce Department reported in the fourth quarter of 2021.

Underneath the disappointing headline number, consumer spending during the first quarter was actually up 2.7 percent. Unfortunately, the overall GDP number was weighed down by an 8.5 percent decline in defense spending during the quarter. The U.S. trade deficit in goods also expanded to a record high in the quarter, which also heavily weighed on GDP growth.

Voices From the Street

Joseph Brusuelas, principal and chief economist for RSM US LLP, said this type of GDP decline is typical of an overheating economy, when Americans turn to international imports to meet surging demand.

“While the grim topline number belies, strong domestic productivity enhancing business investment and solid consumer spending, this data reinforces the idea that price stability is an absolute precondition of maximum sustainable employment and a virtuous composition of growth,” Brusuelas said.

Chris Zaccarelli, chief investment officer for Independent Advisor Alliance, said it’s possible the GDP growth number will be revised higher next month, but the initial estimate should be a “warning sign” for investors.

“We’ve been positioning our portfolios in a more cautious manner over the past five to six months in anticipation of the inflation threat turning into a one-way street toward much higher short-term interest rates, but there is still time for the Fed to get inflation under control and prevent stagflation from taking hold, which is an outcome that no one wants,” Zaccarelli wrote.

Jeffrey Roach, chief economist for LPL Financial, said there is a lot of noise in the first-quarter GDP number.

“This report does not change our expectations that the Fed will likely hike 50 basis points in May and possibly June and then begin a 25 basis point cadence,” Roach said.

Bill Adams, chief economist for Comerica Bank, said the first quarter was not as bad as it looks at first glance.

“The first quarter’s decline in real GDP will not stop the Fed from raising the federal funds target by half a percentage point at their decision next Wednesday, since the parts of the GDP report that are most reflective of the economy’s momentum—consumer spending and fixed investment—performed quite well in the quarter,” Adams said.