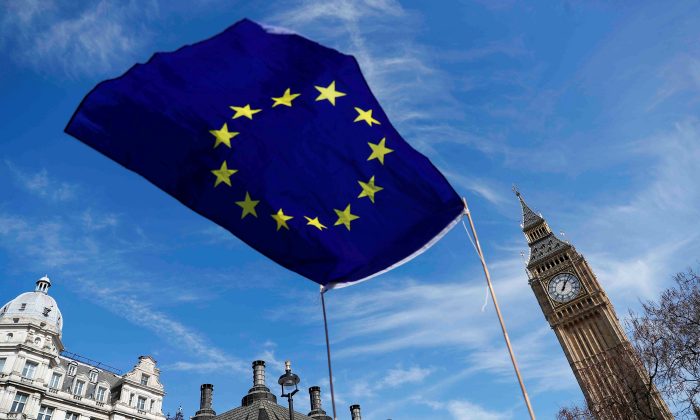 A flag of the European Union flies above Parliament Square during a Unite for Europe march, in London, England, on Mar. 25, 2017. (Reuters/Peter Nicholls)
Business Columnists

Mika Lintilä, minister of economic affairs of Finland, stated in the Finnish Parliament on Sept. 8 that Finland is at war with Russia. This was an inexplicable statement from a Finnish minister. We have not been in war with Russia since the truce ending the Continuation War (a peace treaty was signed on Sept. 19, 1944), and we definitely are not in a war with Russia now.

The statement by Minister Lintilä reflects the “jingoism” that has taken over most European leaders. They are actually waging a war against a country with the most nuclear weapons in the world! My question to European leaders is, have we not learned anything from our past?

I have been detailing the economic costs of the war inflicted mostly by the political decisions (sanctions), not the actual war. Europe is heading into a very dark period economically and politically, but it may turn to something much worse if we are not careful.

For years, our company refrained from forecasting one thing: war. However, we did make an exception in February, when it looked to us that the Ukrainian conflict was spiraling out of control.

We warned our Deprcon subscribers, on Feb. 12, 2022, that “it’s possible that the conflict between Ukraine and Russia will escalate in the coming weeks.” We continued:

“Our risk assessment has changed mostly due to the ‘stalemate’ between Russia and NATO allies. It is our view that Russia is trying to prevent Ukraine from becoming a member of the military bloc and possibly the European Union. It could be that President Putin is ready to play ‘all the cards’ to prevent either of those from happening.”

We changed our stance because we saw that the economic costs of the war would be massive. In our warning, on Feb. 12, we also wrote that:

“If the crisis escalates, as it now seems likely, it could have serious and likely partly unknown consequences on the financial system and the economy. In the worst case, Russia would be shut off from SWIFT, i.e., the global interbank payment system.

“As a retaliation measure, Russia would most likely cut gas supplies to Europe, causing a massive energy crisis on the continent. These would have heavily destabilizing effects on economies, societies, and the financial markets across the world.”

We, unfortunately, turned out to be correct with our warning.

I, and we, naturally continued to monitor the situation in Ukraine, and on Sept. 13, I uncovered a startling scenario.

What if we have misinterpreted the goals of President Vladimir Putin in Ukraine, and what if we, in the West, have relied rather blindly on Ukrainian propaganda regarding events on the ground? This would have shattering consequences in Europe going forward. On that day, I published my controversial and highly discussed scenario on Twitter.

On Sept. 15, I published the whole (worst-case) alternative scenario in my newsletter. It relied on three assumptions:

If these assumptions hold true—and I hope they won’t—they would imply that:

I will not go into details of my analysis here, which you can read in my newsletter, but I want to point out the dangers Europe and the world would be facing if the above scenarios hold true.

The original, publicly stated goal of the strict sanctions against Russia was that it would force President Putin into peace talks or even facilitate a coup in Russia. Now, it seems, that the narrative has changed to that sanctions should be used to “destroy Russia” and force a coup in the country. These are very dangerous goals/statements.

As I mentioned previously, the economist John Maynard Keynes warned the League of Nations, in 1924, against sanctioning the “foes.” He explicitly stated that sanctions “would always run the risk of not being efficacious and of not being easily distinguished from acts of war.” Based on a recent speech by President Putin, the latter is now materializing in the thinking of the Russian regime and the former is looking more and more likely.

As I detailed in my previous article, the European economy is sinking. Russia is naturally suffering, too, but the situation is not looking there as dire as it is in Europe.

Russia has, for example, been racking up a record amount of money from it oil sales. It is likely that there will be buyers for Russian oil even after the European Union sanctions them. The government of Russia is, naturally, running a budget deficit, but it seems to be less than many (including me) first assumed.

Most important, Russia holds not only a massive upper-hand in energy but also in commodities and metals production. Russia, for example, is the leading exporter in palladium, nickel, and small diamonds. The nation also is a major global exporter of platinum, gold, enriched uranium, and coal. Thus, while the Russian economy will suffer, it is unlikely to collapse—and at least ordinary Russians will have electricity and heat through the winter, which cannot be guaranteed for Europe.

President Putin has also established a Stalin-like command-and-control grip on Russia. This, rather straightforwardly, implies that a coup is unlikely.

Don’t get me wrong. We should not accept any forced annexations or wars on our continent (or anywhere else, for that matter). Nevertheless, we Europeans should also understand and remember, very vividly, where the precipitation of war, or “war drums,” will eventually lead to.

I dearly hope that we Europeans have the wisdom and courage to avoid setting the world ablaze—for the third time.