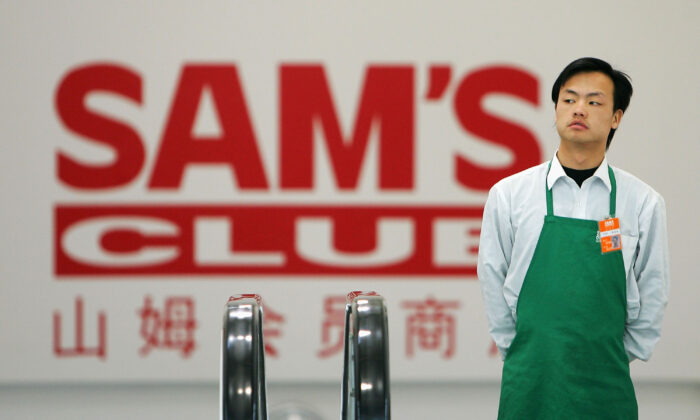 A worker goes up the escalator at Sam's Club, the first branch of a Walmart owned store in Beijing on Dec. 9, 2004. (Cancan Chu/Getty Images)
Finance & Business Ties

U.S. retail giant Walmart Inc. is the latest Western company to be caught in a storm of nationalist outrage in China—which isn’t unusual—after its subsidiary allegedly pulled Xinjiang-sourced products from its locally based stores.

Retail warehouse Sam’s Club, a division of Walmart, responded by indicating that the products weren’t removed but were out of stock, Chinese media outlets said. However, that failed to quell the anger of Chinese consumers, and China’s anti-graft agency on Dec. 31 accused the company of “stupidity and shorted-sightedness.”

The dispute began a week ago, when members of Sam’s Club found no results for products with the keyword “Xinjiang” when they searched via the company’s app. Relevant products, including red dates, raisins, apples, and honey melons grown in Xinjiang, didn’t turn up on Dec. 31 in an app search, according to an Epoch Times review.

Some products from the region were still available at a local Walmart store in Beijing, according to The Wall Street Journal.

A screenshot of the search results went viral on Chinese social media Weibo. The hashtag #CancelCardOfSam has generated almost 500 million views since Dec. 29 on the Twitter-like platform.

The effects to Walmart, which generated revenue of $11.43 billion in China during its fiscal year that ended Jan. 31, 2021, remain to be seen. Of the 423 retail units that Walmart operates in China, 36 are Sam’s Club stores, according to its website.

Chinese media outlet Jiemian News said it found no customers on Dec. 29 applying for card refunds at a local store in the Shijingshan District of Beijing, even amid widespread online outcries. A staff member also confirmed that the store hadn’t seen a sudden increase in membership withdrawals recently.

Sam’s Club Shijiangshan is the second largest store among its warehouse chain worldwide in terms of sales volume, and the second one opened in China.

On Dec. 31, the ruling Communist Party’s Central Commission for Discipline Inspection accused Sam’s Club of boycotting Xinjiang products and trying to “muddle through” the controversy by remaining silent.

President Joe Biden signed on Dec. 23 a bill banning imports from China’s Xinjiang region amid concerns over forced labor and other abuses—accusations that Beijing rejects. The provision is set to take effect 180 days after enactment.

The central regime in China has been stirring up “frenzied national sentiment” by accusing foreign entities of “insulting China,” said Li Yuanhua, a former associate professor at Capital Normal University.

“On the one hand, Beijing hopes to provoke mass movements to demonstrate support at home and fire up nationalism. … On the other hand, it hopes to warn foreign businesses in China to stand by the Party on global issues,” he told the Chinese language edition of The Epoch Times.

But some say they joined the boycott just to follow the trend.

“I bought the membership card but have not consumed much, feeling it’s sort of a loss. I’d take advantage of this opportunity to simply cancel it,” a member told media in China.

“Not canceling your membership does not mean you are not patriotic,” another wrote on social media.

Last month, the chipmaker Intel stoked nationalist fervor in China by asking suppliers not to source products or labor from the northwestern region of Xinjiang, where more than 1 million Uyghurs are held in detention camps.

“[China] has been abusing this concept [China being insulted] to suppress political speech of dissenting views,” said Feng Chongyi, a professor of China studies at the University of Technology Sydney.