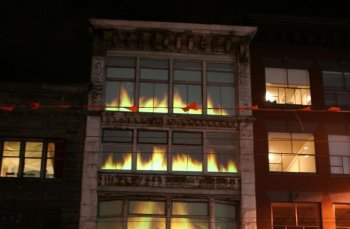 The W2 Culture + Media House provides a space and the tools for unaccredited media to cover the2010 Vancouver Olympics. (Mark M. Smith)
US

Andrea Hayley
Reporting on the business of food, food tech, and Silicon Alley. Studied the Humanities for undergrad, and obtained a Master of Arts in business journalism from Columbia University. I love covering the people, and the passion, that animates innovation in America. Email me at andrea dot hayley at epochtimes.com
View profile
Follow
biggersmaller
Print
For the first—and possibly last—time ever at an Olympics Games, Vancouver has an official social media centre, providing support for hundreds of independent journalists and bloggers from around the world wishing to cover the Games.

Located in the Downtown Eastside, the W2 Culture + Media House provides a space where unaccredited media can work, tweeting and blogging 24/7, and webcast programs live to a global audience.

W2 Executive Director Irwin Oostindie describes daily press conferences and 25 videographers who go out to support the bloggers and independent and online journalists who work out of the pubic space.

“It's a kind of place for camaraderie and looking for stories, and because we're in the Downtown Eastside there is so much activity, there are so many issues here, we can be a great place for people to get the local stories, the local eyes on the ground,” he says.

Oostindie adds that by empowering citizen journalists and with the broad range of stories produced, the appeal of the Games can be expanded to individuals and groups “who may not be represented in the Olympic story.”

“Social media provides that most direct access—empowerment of audiences and proliferation of story-telling away from the dominant media so that the articulation can be more nuanced, can be more relevant to the readers and the viewers.”

W2’s opening on Feb. 10 was attended by Vancouver Mayor Gregor Robertson. To laughs and cheers from the crowd, the mayor used his IPhone to record some video footage of the audience before saying, “We are all media.”

Oostindie estimates that between 500-700 individuals, among them representatives of 35 news groups, have visited the centre daily since the Olympics began.

An environment of inclusivity pervades the centre, which is housed in a mixed-use revitalized building on West Hastings. User-pay, proceeds from W2’s coffee shop, and cultural events provide the funds to pay for the space.

Participants pay a fee of $180, which includes a number of perks such as complimentary beverages and hors d’oeuvre as well as passes to daily receptions and speakers on a variety of topics. Souvenir shwag, meeting space, printing services, fully wired computer workstations, and tickets to the Cultural Olympiad are also included.

On Feb. 22, planned strategically at the halfway point of the Games, W2 will host a much-anticipated media conference to draw attention to and reflect on their social media experiment.

Steve Anderson, co-founder of Fresh Media and co-organizer of the conference, says the event will “basically sort of take the temperature of…how social media is assessing the Olympics and the coverage of the Olympics and also the social issues that surround it.”

“I think it's an exciting time to re-imagine what media and journalism is. That's the kind of ethos and feeling that we'll infuse into the Fresh Media conference and that's what excites me right now.”

Anderson compares W2, with its open platform for media production and collaboration, to a physical mirror image of the Internet.

“People can come and communicate and organize and produce media together and collaborate and participate in different types of media production and cultural events and things like that. So to me, if I was to imagine what the internet would look like in the physical world, it would pretty much be like this. It's just the fact that it's the way the tool is and its property is pretty much the same,” he says.

Vancouver’s Downtown Eastside, well known as one of the poorest neighborhoods in Canada, abounds with artists, activists, community leaders, and professionals. It has the attention of all levels of government, the private sector, Vancouver citizens, and now, with the Olympics, the world. It is no wonder that W2 visionaries like Oostindie see its significance in a global context.

Although this is the first time new media has had an official presence at an Olympics, Oostindie doubts there will be a second. It is expected that for the London Olympics in 2012, social media will be integrated.

“We have been looking at this moment in history between Beijing, where the government limited social media, and when we're going to London 2012 and likely the operations will be monetized and commercialized. So Vancouver is providing the social media community an opportunity to kind of show its stuff uninhibited, and it's been an exciting ride,” he says.

But W2 will live on, with a 9,000-square foot space in the Woodwards building across the street from where it is now.