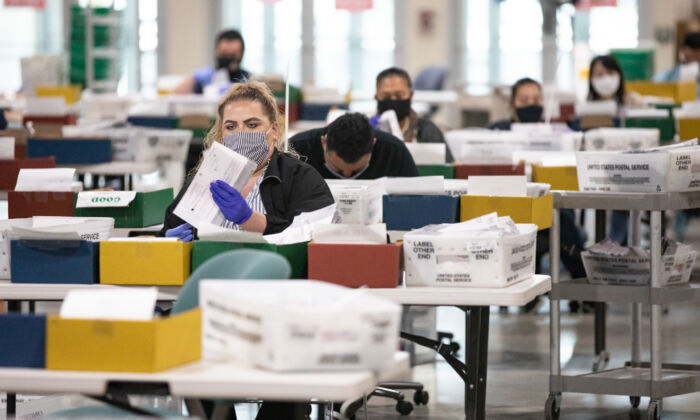 A number of voters and a watchdog group have raised concerns about the integrity of elections since Californians began casting—or mailing in—their ballots earlier this month leading up to the Sept. 14 gubernatorial recall election.

Woodland Hills resident Emon Afshar and his wife, Tina, were told by poll workers they had already voted when they showed up to cast their ballots at the Disabled American Veterans Hall on Sept. 11.

“Then the couple behind us comes to the table, gives their names, and the same thing. The system showed they had voted. So now, there is four of us. And one of the employees over there, or the volunteers, tells us that it’s been happening all day, and in multiple locations,” Afshar told The Epoch Times.

“So, all four of us go to speak to the supervisor,” he said. “We asked him, what is our recourse?”

Vincent McCormack, the supervisor, told the couples they could vote by provisional ballot.

“[He said] that over 70 percent of the people who came in that day experienced the same thing, that the system showed somebody had voted for them,” Afshar said.

The Afshars recorded the conversation on video and sent it to news media. Since then, several nationally known political commentators have shared the video on social media.

Since the story broke, Afshar said he has been contacted by other people who also encountered the same problem at the same polling location.

Afshar and his wife then went to Los Angeles Pierce College, another voting location in Woodland Hills, later that day to vote. There, the system recognized their names as registered voters and they were able to each finally vote on a machine, rather than a provisional ballot, Afshar said.

He said the supervisor at the previous location, McCormack, appeared “flustered” and “worried.”

But, he said, McCormack should have advised voters to try voting at a different location rather than giving everyone provisional ballots.

Afshar said that he received a phone call from Los Angeles County Registrar of Voters Dean Logan on Sept. 13.

In response to an inquiry, Mike Sanchez, spokesperson for the Los Angeles County Registrar-Recorder/County Clerk, told The Epoch Times via email: “The issue (on Saturday, Sept. 11) was quickly resolved and voting was continuous. Any affected voters did receive a Provisional Ballot to ensure no voter was turned away and had the opportunity to cast a ballot. The Provisional Ballots cast at that location were verified and included in the Election Night tally. Registrar Dean Logan did speak directly to the voter on the issue and explained the situation and the resolution to him.”

“The 70% reference is incorrect and was never substantiated—location specific or broadly,” Sanchez stated.

A statement from the Registrar was also released on Sept. 11:

“The Registrar identified issues with the settings on some of the electronic poll book devices used at these locations to check-in voters prior to issuing ballots. The voters who experienced this issue were offered and provided a provisional ballot—the failsafe option to ensure no one is turned away from voting. Provisional ballots are regular ballots and once the eligibility of the voter is verified, they are processed and counted.

“After troubleshooting the issue, the equipment at the locations was replaced and voting continued.”

However, on Sept. 14, Afshar saw news reports about more voters experiencing the same problem at the same location, he said.

Afshar said he would like to see an independent investigation into the matter.

“I want a third-party investigator to figure out what happened, not someone whose job is in jeopardy to come and tell us that everything is OK.”

In another incident, a video recorded on Sept. 14 at the Robbie Waters public library in Sacramento obtained by The Epoch Times showed voter Felise Nglam complaining about the same problem.

“Somebody already voted for me,” he said. “I don’t know what’s going on, but this is why I don’t trust the voting system anymore. It’s just a waste of time.”

On Sept. 13, a number of mainstream media outlets accused Larry Elder, the top Republican contender in the recall election, of making false allegations of election fraud.

The controversy stemmed from Elder’s campaign website, which had included a link to another site called StopCAFraud.com.

Elder’s campaign told The Epoch Times via email that the StopCAFraud website is an “outside company” that is “collecting affidavits of voting fraud or irregularities.”

“The goal is to have the affidavits ready to go in case we need to take legal action,” campaign spokesperson Stephanie Marshall told The Epoch Times in an email on Sept. 14.

“We should all be concerned about election integrity and we all want every proper vote to be counted. We’ve provided a link to an outside website that is providing an avenue for voters to document irregularities they encounter in this election,” Ying Ma, Elder’s communications director, said in a statement issued earlier the same day.

The StopCAFraud site states that it was “Paid For By Larry Elder Ballot Measure Committee Recall Newsom Committee,” and lists its funding sources as Elder for Governor 2021, Geoff Palmer, and Saul Fox.

It asks Californians to “Report Election Fraud in CA,” and states: “Election integrity should be a universally accepted American ideal. Unfortunately, there are instances where such integrity is called into question.”

It then asks anyone who has “experienced any irregularities, interference, or intimidation while voting” to fill out a form to report these incidents.

Possible problems with the integrity of elections in California, an almost solidly blue state, have been investigated and discussed for many years.

Ruth Weiss of the Election Integrity Project–California (EIPCa) told The Epoch Times that the problem is much deeper than isolated glitches in the system and complaints shouldn’t be casually brushed off but be taken seriously.

In many cases, mistakes are made because poll workers aren’t adequately trained, she said.

Rather than accept provisional ballots, Weiss advised voters to demand that poll supervisors call the Registrar of Voters hotline to report the problem and get the issue resolved.

EIPCa said some vote-by-mail ballots in the recall election were flawed because a vendor apparently cut off the part of the code that was supposed to be printed on them. EIPCa received several reports, but stated that it’s still too early to tell exactly about how many defective ballots were sent out.

“I can’t give you numbers. I just know it’s serious, and it is not just one county,” Weiss said.

“The machines are rejecting these ballots because when the vendor cuts these ballots apart, they trimmed off part of the code and so now the machine can’t read it.”

The legal rights of citizen poll observers to watch activities of the electoral process were also “limited or suspended so they could not engage in meaningful observation” in some counties, she said.

Many of the election integrity issues stem from the push by California lawmakers to create a “permanent” vote-by-mail system, Weiss claimed.

A number of problems “come from sending a vote-by-mail ballot out to everybody on the voter rolls when your voter rolls are not maintained.”

In the 2020 election, Weiss said vote-by-mail ballots were sent to more than 440,000 ineligible voters, and she expects that number may be even higher in the recall election.

Other voters reported getting multiple ballots, she said.

In December 2018, the state of California and Los Angeles County agreed to remove up to 1.5 million inactive voters from voter rolls in order to settle a federal lawsuit brought by Judicial Watch and EIPCa.

In January, Election Integrity Project and 10 California congressional candidates filed another lawsuit against California state officials and various registrars of voters over what they claim were unconstitutional practices and laws used in the November 2020 election.

Weiss said the EIPCa received criticism from both Democratic and Republican political parties for suggesting that people vote in person or take their vote-by-mail ballots to polling locations in person for the recall election.

“People on both sides of the issue in this particular election felt that our message was getting in the way of their get-out-to-vote message” to mail their ballots in early or take them to ballot drop box locations, Weiss said.

“We have always advocated for going back to a system where everybody votes in-person unless they can’t and then they ask for an absentee ballot, not a vote by mail ballot, as so many other states do,” Weiss said.

Ballot harvesting, she said “is a felony in some states,” while it’s currently legal in California.

To restore election integrity, EIPCa supports a return to the previous system of absentee ballots. Under that system, voters must apply for an absentee ballot, which must be delivered to a polling location by a close friend, relative, or someone living in the same household as the absentee voter to ensure a proper chain of custody.