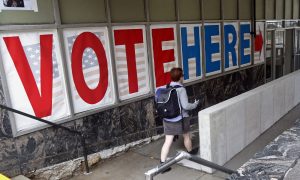 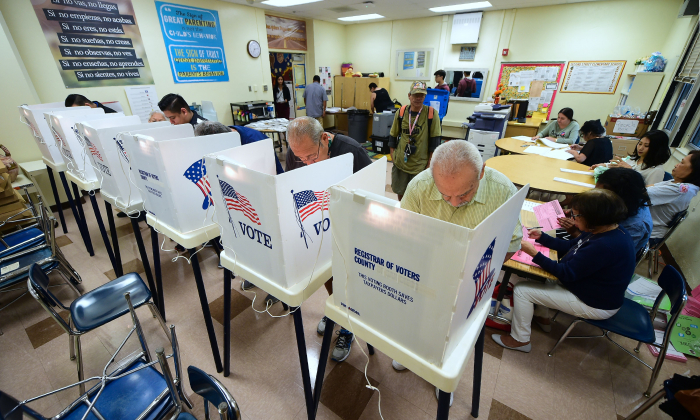 People cast their ballots in voting booths at the Second Street Elementary School in the Boyle Heights neighborhood of Los Angeles, California on Nov. 6, 2018, as Americans across the country cast their votes for the midterm elections. (Frederic Brown/AFP/Getty Images)
Politics

California to Remove Up to 1.5 Million Inactive Voters From Registration Rolls to Settle Lawsuit

The State of California and Los Angeles County agreed to remove up to 1.5 million inactive voters from voter rolls Dec. 3 in order to settle a federal lawsuit brought by a watchdog group.

The settlement agreement (pdf), filed Dec. 3 with U.S. District Court Judge Manuel Real, requires the state and the county to notify all of the 1.5 million potentially ineligible voters and remove them from voter rolls if there is no response.

As part of the settlement, California Secretary of State Alex Padilla agreed to update the state’s NVRA manuals and to notify election officials in each county that they are obligated to regularly clean up voter rolls.

“Judicial Watch and its clients are thrilled with this historic settlement that will clean up election rolls in Los Angeles County and California—and set a nationwide precedent to ensure that states take reasonable steps to ensure that dead and other ineligible voters are removed from the rolls.”

Judicial Watch settled similar statewide challenges in Ohio and Kentucky in 2014 and 2018 respectively. The watchdog also forced the state of Indiana to voluntarily clean up voter rolls and is engaged in an ongoing lawsuit with the state of Maryland.

California, the most populous state in the union, has a registration rate of approximately 101 percent of age-eligible citizens, the lawsuit alleged.

The California lawsuit revealed that Los Angeles County has not cleaned up its voter rolls for the past 20 years, despite a Supreme Court ruling (pdf) last year making such purges mandatory.

With 10 million residents, Los Angeles County has a bigger population than 41 of 50 U.S. states.