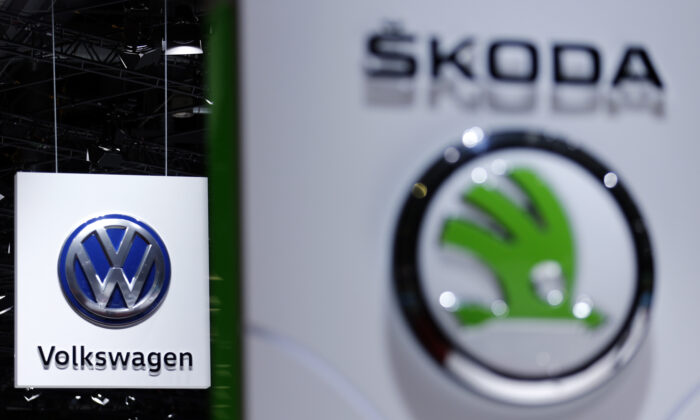 A Volkswagen logo is pictured next to a logo of Skoda during the second media day of the 86th International Motor Show in Geneva, Switzerland, on March 2, 2016. (Denis Balibouse/Reuters)
Companies

PRAGUE—Skoda Auto started a two-week outage on Monday as the carmaker contends with the global shortage of chips and other components, the Vokswagen-owned company said.

Skoda wants to complete 10,000 unfinished cars during the outage, which will leave only one production line running, a spokesman said.

“Skoda Auto has been struggling with a big shortage of critical components, which has forced it to limit production significantly in the past weeks,” spokesman Tomas Kotera said.

Skoda, the Czech Republic’s biggest exporter, said on Oct. 7 that it would “significantly reduce or even halt” production from Oct. 18 until the end of the year because of the global shortage of chips hobbling the automotive sector.

The Czech Auto Industry Association on Sunday said that Czech carmakers will produce quarter of a million fewer cars than expected this year because of the global microchip shortage, costing the automotive sector 200 billion crowns ($9.14 billion) in sales.

The car sector is the backbone of the Czech economy, employing 180,000 workers and accounting for a quarter of industrial output.