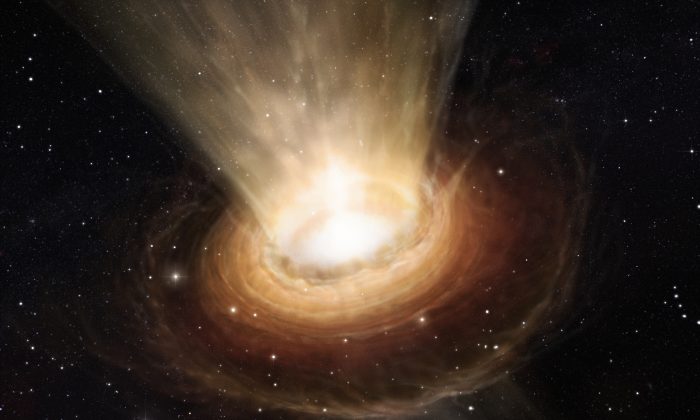 There may be more and bigger black holes out there than we thought. Do we need a map? (ESO/Wikimedia Commons)
Science

It’s impossible see directly into a black hole and gaze inside its event horizon. But in some circumstances, when a black hole devours nearby star material, it creates a spectacle that can be viewed as enormous radiation. Scientists are able to observe this as light coming from the black hole just before it disappears into the black hole using high frequency gamma, or X-ray, telescopes.

For the first time ever, we can see visible light coming from a black hole https://t.co/zBklINQL6X pic.twitter.com/oHUerQC1uJ

More importantly, a team of Japanese researchers, led by Mariko Kimura, an astronomer at Kyoto University, were able to view the flash and flare of visible light from a mere 20-cm telescope for the first time ever. The variation of flickering of the visible light measured between 100 seconds to 150 minutes. This breakthrough means even amateur telescopes capable of only viewing visible light could now be possible to view black hole activity, according to Space.com.

“We find that activity in the vicinity of a black hole can be observed in optical light at low luminosity for the first time,” Mariko Kimura said, according to Space.com. “These findings suggest that we can study physical phenomena that occur in the vicinity of the black hole using moderate optical telescopes without high-spec X-ray or gamma-ray telescopes.”

The team of researchers discovered the outburst last June, when the relatively dull V404 Cygni, the closest black hole to Earth at 7,800 light years away, suddenly “awakened’ since its discovery in 1989.

The researchers hope to understand such events even more, and they have encouraged others to also use optical light to observe the black hole.