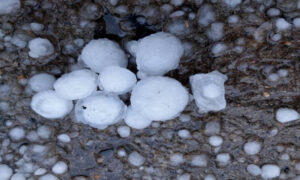 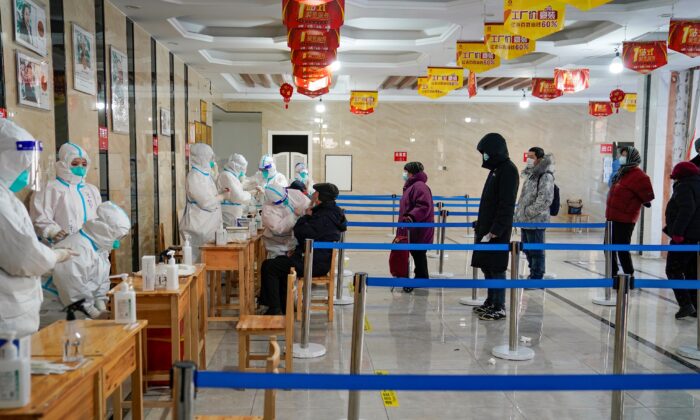 A medical worker takes a swab sample from a man as people queue to get tests for Covid-19 coronavirus at an office building in Harbin, in northeastern China's Heilongjiang province on Jan. 14, 2021, after the province declared an "emergency state" as daily Covid-19 numbers climb. (STR/AFP via Getty Images)
CCP Virus

The situation is severe in Harbin city, the provincial capital of China’s northeastern province Heilongjiang, which is one of the hardest-hit areas of the CCP virus pandemic in China. Local residents suspect that the government is covering up the real situation of the pandemic in the city, as extreme lockdown measures were applied to “low-risk areas,” scores of private companies in the area have closed down, and prices for food have skyrocketed.

Currently, there are 11 regions designated as “high-risk” for COVID-19 spread, including seven in Heilongjiang and four in Harbin.

On Feb. 4, a number of residents in Harbin told The Epoch Times that the local epidemic situation was much more serious than the authorities reported. Many communities have been under lockdown for more than half a month, and residents cannot leave their apartment buildings.

Mr. Gao (alias), a resident of Building 3 in Changyuxinggangwan Yutian Community, Limin Street of the Limin Development Zone, said that there were two employees of Zhengda Foods living in the same building. After they were confirmed to be diagnosed with COVID-19, their building was sealed around Jan. 20, and no one has been allowed to leave the building since. Many people said they cannot bear the isolation much longer.

“Limin Street’s risk level has been raised to ‘high,’ and the situation is much more serious than reported,” Mr. Gao told The Epoch Times. “Infected cases are found in Limin every day.”

Mr. Gao revealed that there were people infected in many communities around them, most of whom contracted the disease through the Zhengda food company. More than 80 positive cases were found in Zhengda a few days ago, which were not announced by the government, Gao said. Many people in the Limin Development Zone dare not open their businesses anymore. Now if people are found walking on the road, they are arrested immediately and put in isolation sites, he added.

Harbin resident Mr. Yu told The Epoch Times that the epidemic situation in Harbin is very serious. The area he lives in has been under lockdown since Jan. 19, despite it being a low-risk area. The government does not tell or report anything, and he has been locked in without knowing the epidemic situation and what is going on. “An order came from above [in the government], then they’ve made a mess, sealing everyone inside their homes. Only one person in each household can go out every two days, and they have to be back in two hours.”

Yu said that the restrictions are also implemented in other areas nearby. “A lot of communities are under strict lockdown now, and the restrictions are stricter in each community now than last year. One community whose residents are all civil servants has been closed off, and they can’t get out. Since the civil servants are locked in their homes, the government is not operating.”

Some residents also said that more and more resident buildings have been suddenly sealed off lately. They suspect the actual epidemic situation may be far more severe than announced by the officials.

Yu also said that prior to the lockdown, he went out and saw that many private companies were closed. “How long can this kind of lockdown and household closure last? It is very difficult to recover.”

“In the Chinese New Year, it’s time for everyone to go out to spend money and for the businesses to make money. Now everyone is locked in, and it will have a big impact on the lives of the people in the future,” he added.

Another Harbin resident Ms. Zou told The Epoch Times that a dental hospital located on the first floor of her building was closed. “When it closes, there is no income, but they still have to pay the rent.”

“Now the price of vegetables is also very expensive, green onions are more than 16 yuan ($2.5) per kilo, and in the store in the community, cabbage costs 8.4 yuan ($1.3) per kilo. I have never seen such high prices for vegetables! If the wages do not increase, and the vegetables are so expensive, how can ordinary people live?” she said.

She also revealed, “it costs money to get nucleic acid test reports back, despite the test being free. And those who are placed in isolation sites need to pay for their stay out of their own pocket, which is very expensive. Who can afford it!?”

Wang Jiayi, Luo Ya, Hong Ning, and Zhang Dun contributed to this report.