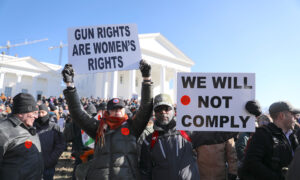 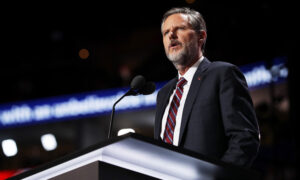 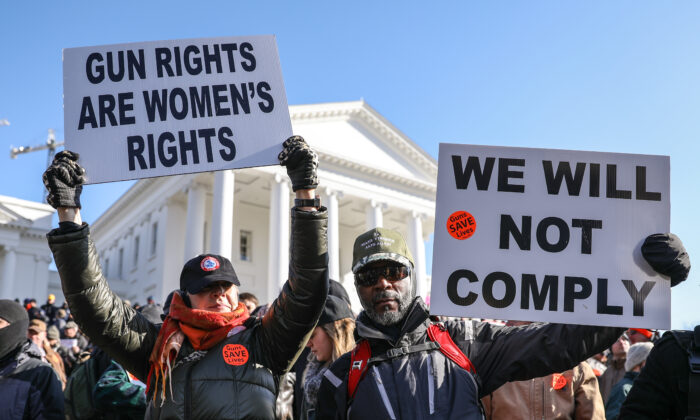 A bill that would ban citizens from owning or selling an “assault firearm” passed a Virginia House of Delegates committee on Feb. 7, as several gun control proposals move through the Democratic-controlled state legislature.

Meanwhile, gun sales in the state have soared in the past few months.

The legislation, dubbed HB 961, expands the definition of “assault firearm” and “prohibits any person from importing, selling, transferring, manufacturing, purchasing, possessing, or transporting an assault firearm.” It passed the House of Delegates Committee on Public Safety along party lines by a vote of 12–9.

The bill defines an assault firearm as “a semi-automatic center-fire rifle that expels single or multiple projectiles by action of an explosion of a combustible material with a fixed magazine capacity in excess of 12 rounds,” among other things.

A violation of the proposed bill would result in a Class 6 felony, according to the text of the legislation. In the state, Class 6 felonies are punishable by a prison term ranging between 1 to 5 years.

HB 961 will need to pass the state House and Senate by the Feb. 11 deadline and also be signed by Virginia’s governor to officially become law.

NRA spokesperson Catherine Mortensen said the proposed gun ban is “will make millions of law-abiding Virginians felons overnight while doing nothing to decrease crime. That’s why a majority of Virginians oppose it.”

The Coalition to Stop Gun Violence, a nonprofit gun control advocacy organization, said in a statement that it welcomed the vote.

“Perpetrators of mass shootings often use these types of weapons coupled with high-capacity magazines, which increase lethality by giving the shooter more firepower without having to reload,” Lori Haas, the group’s Virginia state director, said. “This legislation is the first step towards getting these weapons of war off the streets of Virginia.”

The Senate version of a similar assault weapons bill was shut down weeks ago during a Senate Judiciary Committee hearing.

House Minority Leader Todd Gilbert said in a Feb. 7 statement following the recent vote on assault weapons that House Democrats “seem to have learned nothing from the public outcry caused by their proposals.

“Any legislation that requires Virginians to surrender or destroy their lawfully possessed firearms or standard-issue magazines is tantamount to confiscation and a gross violation of our constitutional rights,” Gilbert, a Republican, added.

The legislation also makes clear that any Virginian who legally owns an assault firearm on July 1, 2020, “may retain possession of such assault firearm after January 1, 2021, if such person has obtained a permit from the Department of State Police to possess an assault firearm in accordance with procedures established in the bill.”

Virginia’s Senate has since passed four gun control bills, which are being sent to the House for further discussion.

“Virginians are responding by voting with their wallets,” Mark Oliva, director of public affairs at the NSSF, told The Epoch Times.

“I think as long as firearms restrictions are being talked about and are being debated, you’re going to see more and more Virginians turning out to buy the firearms that they want.”

After Democrats won control of the state legislature in the November elections last year, Oliva said NSSF noted an increase in background checks for purchased guns in both December and January, adding that he believes the trend will continue.

He said self-defense is something that is becoming more important to Americans.

“I think it’s because more and more Americans are taking responsibility for their own safety. This idea that the government will provide for your safety I don’t think is being bought by your average American,” Oliva said.

“Women are overwhelmingly buying small defensive-use handguns,” he added. “That tells you something: More and more women are taking the responsibility of their safety into their own hands.”