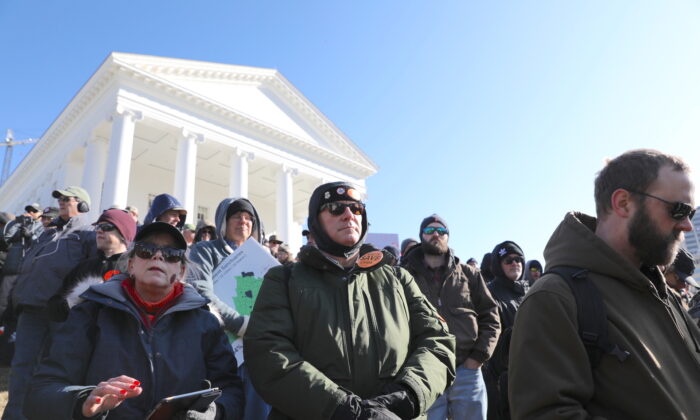 Around a dozen gun control bills have swiftly advanced through Virginia’s state legislature in recent weeks, while some of the more controversial measures, such as a ban on owning and selling “assault weapons,” have been struck down.

Democrats recently won control of the state’s House and Senate chamber and have vowed to enact stronger gun control policies, saying it will help reduce shootings and deaths. The party now has full control of the General Assembly—for the first time in over two decades—and Virginia’s governor, lieutenant governor, and attorney general are Democrats as well.

Each house in Virginia’s legislature must act on its own legislation by Feb. 11.

On Jan. 24, the Virginia House Public Safety Committee voted to advance seven gun control measures, which will likely head to the full House of Delegates in the coming days before going to the Senate, and will have to be signed by Gov. Ralph Northam to become law. Meanwhile, Virginia’s Senate has since passed four gun control bills, which are being sent to the House for further discussion.

The measures recently passed by the House Committee include universal background checks, legislation limiting handgun purchases to one per month, penalizing gun owners who don’t report lost or stolen guns within 24 hours, and allowing localities to ban arms from government buildings.

The committee, however, didn’t pass a bill that would ban “assault weapons,” while the Senate counterpart of that bill was also killed weeks ago during a Senate Judiciary Committee hearing.

Mortensen said the committee blocked legislators’ questions and prevented constituents from speaking. Most of the House committee bills passed along party lines, 13–9.

“Virginians deserve lawmakers who will hear testimony and conduct serious vetting of each bill—as the Senate Judiciary Committee did—before voting on measures that will strip away the constitutional rights of law-abiding citizens and leave them defenseless,” she said.

In a Jan. 24 statement following the passage of the House Committee’s bills, Eileen Filler-Corn, speaker of the House of Delegates, said that Virginians spoke clearly when they voted in the November 2019 elections. She said voters turned out “to demand action from the General Assembly to make their communities safer.”

Northam has indicated previously that he would sign gun control measures into law. He and other Democratic lawmakers in the state have credited their focus on gun control for helping them win full control of the General Assembly, according to The Associated Press.

Culpeper County Sheriff Scott Jenkins told The Epoch Times earlier this month that the advancing of gun control bills is “going to flip Virginia back red in so many ways they don’t expect.”

Jenkins said the strong push for tighter gun control has “awakened a [segment of the] population in the state that has long been quiet.”

“And that doesn’t account for the court battles that are coming, because there are plenty of us willing to battle this out in the court the right way, as well,” he said.

Virginia’s Senate, in the meantime, passed a “red flag” bill (SB 240) on Jan. 22 by a 21–19 margin. It was the latest bill advancing through the Senate, which has already passed three other gun control measures.

The Senate chamber has passed measures requiring background checks on all firearms sales, the limiting of handgun purchases to one per month, and the allowing of local government powers to ban weapons from public buildings and other venues.

The red flag bill, once signed into law, allows authorities to apply to certain courts for “an emergency substantial risk order to prohibit a person who poses a substantial risk of injury to himself or others from purchasing, possessing, or transporting a firearm.”

Critics of the legislation told The Epoch Times that red flag laws allow the theft of personal property from law-abiding citizens who have committed no crime.

“It is an unconstitutional pre-crime program like you would expect to see in some communist backwater nation,” Dudley Brown, president of the National Association for Gun Rights, told The Epoch Times previously.

Following the Jan. 20 gun rights rally, which concluded peacefully, Northam issued a statement saying he would “continue to listen to the voices of Virginians.” Meanwhile, a Change.org petition that was started over the measures has garnered more than 68,000 signatures calling for the impeachment of Northam.