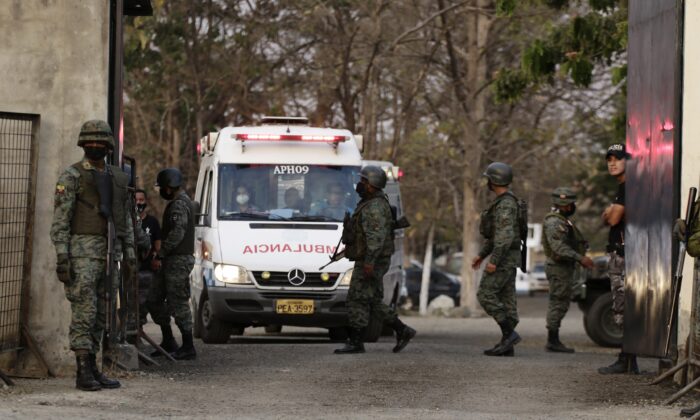 An ambulance leaves the Litoral Penitentiary after a prison riot, in Guayaquil, Ecuador, on Sept. 29, 2021. (Angel DeJesus/AP Photo)
Americas

In the aftermath of deadly prison riots and economic fallout from the arrival of the CCP (Chinese Communist Party) virus, Ecuadorians are grappling with a historic four-year spike in violent crime, which hit new highs in 2021.

Murders in the country have doubled from January to August this year, according to the Ministry of the Government. Additionally, armed assaults increased by 28.4 percent, vehicle theft is up 58 percent, and burglaries have risen 16 percent.

“It’s not a coincidence that the provinces most affected [by the rise in crime] also have a history of drug smuggling,” Delgado told The Epoch Times.

He lives in Portoviejo, which is the capital of Manabi province, and says drug trafficking in the coastal provinces has always been an issue.

“It’s easy to smuggle things out on boats, especially in Esmeraldas, due to its proximity to Colombia.”

Back in March, a naval vessel intercepted 300 kilos of drugs from a boat on the maritime route between the city of Esmeraldas (Ecuador) and Tumaco (Colombia).

“A lot of the murder victims turning up in recent months are drug related killings. The pandemic has been good for [their] business, so some of this [violence] is territorial,” Delgado said.

Narco-related activities in Ecuador escalated during the COVID-19 pandemic, with many criminal gangs taking advantage of strict lockdowns and the lack of movement to grow their profits.

On the evening of Nov. 18, President Guillermo Lasso issued executive decree 257, which extended the national state of emergency due to significant security concerns.

Lasso originally declared a state of emergency under executive decree 224  on Oct. 18 to combat the rise in violent crime.

Applauding the efforts of Ecuador’s armed forces, Lasso tweeted on Nov. 18 that 234,804 special operations carried out by the police succeeded in seizing 16 tons of drugs and 634 illegal firearms. Police also arrested 6,894 persons of interest and dismantled 76 criminal gangs.

Security and development expert, Mario Ramos, told The Epoch Times via What’s App the country needs a consistent, systematic public policy to get a handle on the crime surge, especially at the provincial level.

“This has definitely not happened,” Ramos said.

He explained that political differences are at the root of these inconsistencies in security policies, with each new government replacing key administrators like the minister of the interior, who specializes in security. This is what happened after Lasso took office in May 2021.

Ramos says the nation’s deadly prison riots back in September arose from the neglect of policies after the removal of the previous minister of justice and human rights.

In addition, a diminished intelligence network has resulted from the political changing of the guard. Ramos believes the government has other priorities.

“Also the pandemic deepened the [existing] economic crisis and, also, unemployment,” he said.

When it comes to solutions, Ramos was candid, “Appoint more capable officials [in security-related offices]. There is a lot of improvisation in the current ones [under Lasso].”

Ramos believes having the resources to put a plan into action, and the government acting out of more than just temporary political interests, are key in turning the tide in the country’s crime wave.

He says, “A real strategic plan must be made,” to achieve forward progress.