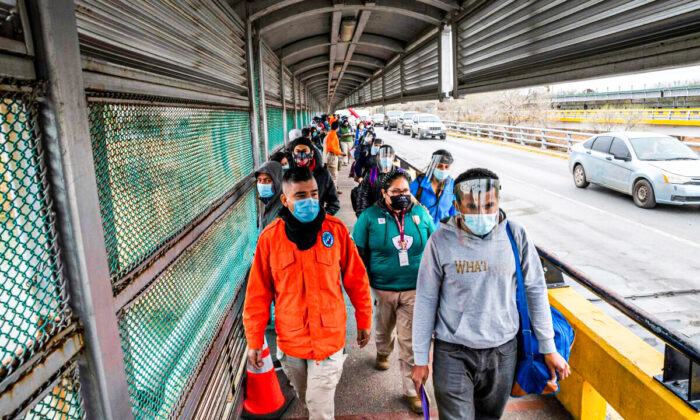 Among the thousands of illegal aliens crossing the United States border this year, the number of Ecuadorians detained or deported by U.S. border security reached 97,074 in September.

That’s more than seven times the number of illegal border-crossers from Ecuador encountered by U.S. border officials by this time in 2020.

“William Murillo,
co-founder of the Ecuadorian legal service 1800Migrante.com,” said there are multiple factors driving this new surge, but he points to one element in particular.

“The economic effects of COVID-19,” he told The Epoch Times.

About 97 million people fell into extreme poverty in 2021 due to economic blowback from pandemic lockdowns, with eight out of 10 “new poor” coming from middle-income countries, according to the World Bank.

Ecuador lost $6.42 billion between March and May 2020 due to CCP virus lockdowns, based on a disaster-needs assessment released by the United Nations.

Murillo said Ecuadorian migration has endured peaks and lulls over the past 20 years, with 2008 and 2021 being notable apexes, and that economic fallout during the pandemic left the nation’s already struggling economy shattered.

When it comes to the primary components behind the latest surge, Murillo said, “It’s mainly poverty, corruption, and lack of opportunities in Ecuador.”

Meanwhile, Mexico and Guatemala have changed their visa requirements for Ecuadorian migrants.

Mexico announced the reinstatement of a tourist visa policy for Ecuadorians in a bid to stem the tide of migrants heading toward the U.S. border, which went into effect on Sept. 4.

Seven out of 10 migrants who enter Mexico from Ecuador don’t return home, according to Roberto Canseco, a minister at the Mexican embassy in Quito, Ecuador.

Guatemala followed suit on Sept. 20 and also now requires a visa for Ecuadorians to enter.

With unemployment levels surpassing 16 percent last year—combined with a slow economic recovery—some Ecuadorian families feel they have little choice but to look elsewhere for a better future.

Miguel Acosta, 44, and his family live in Guayaquil, the largest city in Ecuador, and have endured financial hardship brought on by the arrival of the CCP virus.

“First it was not safe to go outside, and now there are no jobs left,” Acosta told The Epoch Times.

Acosta hasn’t worked for the past four years due to medical problems, but his wife runs a small store in Guayaquil while caring for their three children who still live at home.

“My [eldest] son Carlos left because there is no work. He’s working in Mexico now and saving [money] to go to the U.S.,” he said.

Asked what his son plans to do in the United States, Acosta replied: “Work, study, and send us money here” in Ecuador.

From an immigration attorney’s perspective, Murillo said that having someone established in the United States to help you once you cross the border is paramount.

“Several generations of Ecuadorians have emigrated since the 1970s, so most migrants have a relative, friend, or neighbor who receives them and helps them find work,” he said.

“Support is vital when deciding to travel to the USA.”

Despite the risks, which include deportation by U.S. border security, navigating drug and human traffickers, and dangerous elemental obstacles, Acosta remains optimistic about his son’s chances of crossing the border illegally.

“He’s a good swimmer, and he worked on his uncle’s farm [growing up]. Carlos is a strong boy, he’ll be able to cross [to the U.S.] when he’s ready,” Acosta said.

A father’s hopes aside, Ecuadorian migrants close to Acosta’s son’s age have gone missing or turned up dead in recent months due to extreme challenges in the region.

“So long as Ecuador doesn’t solve structural problems deep in the country, we will have migration to the U.S. and other countries,” he said.