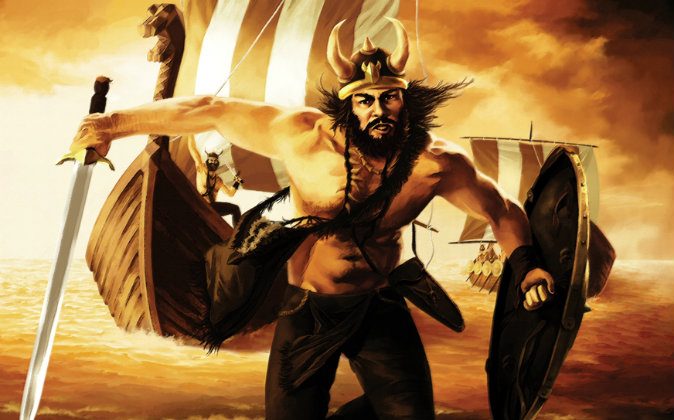 Today, the word ‘berserk’ is used to describe anyone in an irrational, agitated state of mind who cannot or does not control his or her actions. The meaning of the word originates with the Viking berserkers, the fierce warriors who were known for battling in an uncontrollable, trance-like fury, and were alleged to be able to perform seemingly impossible super-human feats of strength.

In medieval Norse and Germanic history and folklore, the berserkers were described as members of an unruly warrior gang that worshipped Odin, the supreme Norse deity, and were commissioned to royal and noble courts as bodyguards and ‘shock troops’, who would strike fear into all who encountered them. Adding to their ferocity, and in order to intimidate the enemy, they would wear bear and wolf pelts when they fought, giving them the name Berserker, meaning “bear coat” in Old Norse.

The fury of the berserkers would start with chills and teeth chattering and give way to a purpling of the face, as they literally became ‘hot-headed’, and culminating in a great, uncontrollable rage accompanied by grunts and howls. They would bite into their shields and gnaw at their skin before launching into battle, indiscriminately injuring, maiming and killing anything in their path.

Dating back as far as the ninth century, the berserker Norse Warriors were said to be able to do things that normal humans could not. According to ancient legend, the berserkers were indestructible, and no weapon could break them from their trance.  They were described as being immune to fire and to the strike of a sword, continuing on their rampage despite injury. The Icelandic historian and poet Snorri Sturluson (1179–1241 AD) wrote the following description of berserkers in his Ynglinga saga:

“His (Odin’s) men rushed forwards without armour, were as mad as dogs or wolves, bit their shields, and were strong as bears or wild oxen, and killed people at a blow, but neither fire nor iron told upon them.”

It is believed that this account is partially true and that their trance-like state actually prevented them from feeling pain until after the battle.

While some researchers believe the Berserkers simply worked themselves up into a self-induced hysteria before fighting, others maintain that it was sorcery, the consumption of drugs or alcohol, or even mental illness, such as mania or post-traumatic stress, that accounted for their behaviour. Some botanists have claimed that berserker behaviour could have been caused by the ingestion of the plant known as bog myrtle, one of the main spices in Scandinavian alcoholic beverages.

Other more esoteric theories surround supernatural beliefs. For instance, some scholars have claimed that the Vikings believed in spirit possession and that berserkers were possessed by the animal spirits of wolves or bears. According to some theorists, berserkers learned to cultivate the ability to allow animal spirits to take over their body during a fight (an example of animal totemism) that also involved drinking the blood of the animal that they wished to be possessed by.

*Image of a viking warrior via Shutterstock