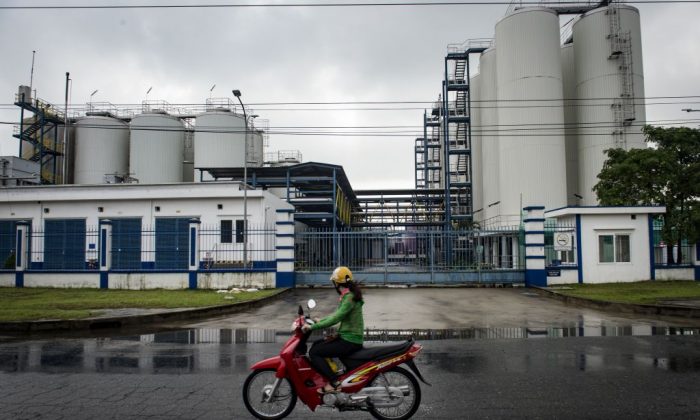 A Vietnamese woman drives a motorbike past a factory in an industrial zone in the central Vietnamese city of Danang on Nov. 10, 2017. (Lillian Suwanrumpha/AFP/Getty Images)
Asia & Pacific

Vietnam Wary About Recent Surge in Chinese Investments, Potentially to Dodge US Tariffs

Vietnam is voicing concerns about a sudden surge in Chinese investment this year, purportedly for the purpose of transshipment to avoid U.S. tariffs.

Vietnamese online news site VietNamNet, in an article published on Dec. 4, reported that Chinese investors made 922 deals worth $500 million in either capital contributions or acquisitions of Vietnamese companies in the first seven months of this year.

Some of these Chinese companies that have invested in Vietnam are suspected of shipping unfinished products from China to Vietnam, then exporting these items to the United States through Vietnam-based intermediary companies for the purpose of avoiding U.S. tariffs on Chinese goods, according to VietNamNet. Experts cited in the article warned the Vietnam government to take action against the illegal Chinese activity.

The 10 percent tariffs were set to increase to 25 percent in January, but the escalation was put on hold for 90 days starting Dec. 1, after U.S. President Donald Trump and Chinese leader Xi Jinping held what the White House called “a highly successful meeting” on the sidelines of the G-20 leaders’ summit in Buenos Aires, Argentina.

China agreed to buy more U.S. goods, and impose measures to fight the production of fentanyl within its borders. Trump has said he’s ready to impose the originally scheduled tariffs if the two countries can’t resolve their differences within the 90-day period.

Nguyen Xuan Thanh, a lecturer on public policy at Fulbright University located in Ho Chi Minh City, warned that Vietnam needs to be cautious with the recent Chinese investment.

If Vietnam is unable to prevent the transit of Chinese goods passing through en route to the United States, Vietnam may “bear punishments imposed by the U.S., as in the case of steel that originated in China but exported from Vietnam,” Thanh told VietNamNet.

In December 2017, the U.S. Commerce Department imposed import duties on Vietnamese steel, after it found that China had sent steel to Vietnam to dodge U.S. anti-dumping and countervailing duties imposed in 2015 and 2016—a measure to counter Beijing’s dumping of government-subsidized steel into the U.S. market.

Bùi Quang Tín, CEO of BizLight Business School, warned that if the United States were to impose punitive tariffs on Vietnam, the effects on the Vietnamese economy would be tremendous, according to VietNamNet.

Currently, the U.S. government has a number of punitive laws against importers that commit transshipment violations. Importers that falsify shipping origin labels can be criminally prosecuted for smuggling, fraud, and other offenses, according to a legal blog run by U.S. law firm Harris Bricken. Individuals found guilty of smuggling can be imprisoned for up to 20 years.

Individuals or companies can also file “qui tam” lawsuits against importers for defrauding the U.S. government under the False Claims Act (FCA). Depending on whether the federal government decides to intervene and prosecute the case, the plaintiff can be awarded 15 to 30 percent of the damages.

In February 2013, the U.S. Department of Justice charged Groeb Farms, a honey supplier based in Onsted, Michigan, with illegally importing Chinese-origin honey between 2008 to 2012, with false labels claiming that the honey came from Indonesia, Malaysia, Thailand, and Vietnam. The company was accused of evading more than $78.8 million in U.S. antidumping duties.

Other countries aside from Vietnam are also known for being intermediate countries where Chinese companies have shipped their goods to avoid U.S. tariffs and duties, including Thailand, Indonesia, and Taiwan.

In May 2012, the U.S. Commerce Department announced 31 percent anti-dumping tariffs on Chinese solar panels. To avoid these tariffs, Chinese solar panel makers subsequently shipped their solar products to other countries, including Taiwan, before sending them to the U.S. market, according to Taiwanese media.

In response to China’s transshipment to Taiwan, in 2014, the Commerce Department slapped new anti-dumping tariffs on both Chinese and Taiwanese solar panels.

Thailand trade officials announced in July that they would cooperate with U.S. customs representatives in Thailand, to share information and curb attempts by Chinese companies to use that country as an intermediary for avoiding the most recent U.S. tariffs, according to a July 2018 article by Thailand’s English-language daily newspaper Bangkok Post.

Wanchai Varavithya, deputy director-general of Thailand’s Department of Foreign Trade, pointed out that U.S. officials have expressed concerns about Chinese diamond saw blades, clothes hangers, and nails—currently subject to either trade-war-related tariffs or other U.S. duties—being shipped to the United States through Thailand, according to Bangkok Post.