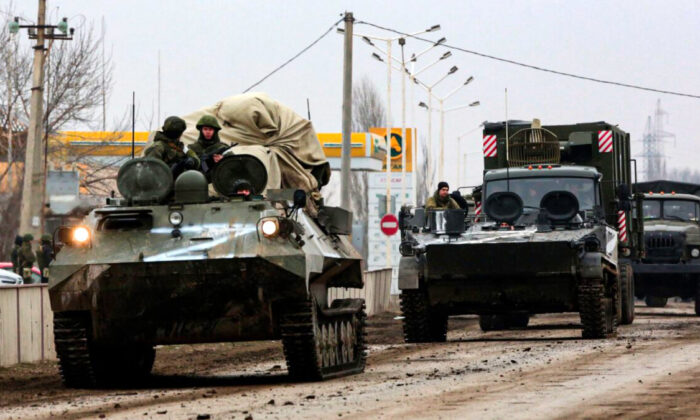 A Ukrainian man apparently tried to block a Russian convoy of armored vehicles by stepping in front of the trucks, according to footage of the incident that has since gone viral.

The 28-second video, shared by Ukraine news agency HB, shows an unarmed man running in front of several armed vehicles advancing down a road. The encounter has drawn comparisons to the iconic “tank man” of Tiananmen Square.

“Ukrainian rushes under enemy equipment so that the occupiers do not pass,” the outlet wrote on Twitter along with the video of an unidentified man attempting to obstruct the convoy.

“Tank man” refers to the man who was pictured standing in front of a line of tanks near Tiananmen Square on June 5, 1989—a day after the Chinese Communist Party (CCP) ordered their troops to roll in tanks and open fire on civilians following weeks of protests centered in Tiananmen Square.

The CCP has never released a full account of the violence. Days after June 4, 1989, the CCP announced a death toll of about 300, most of them soldiers. However, rights groups and witnesses say thousands of people died. Unnamed sources within the CCP say at least 10,000 people were killed, according to a declassified British diplomatic cable and declassified White House documents.

It’s unclear when and where the Ukrainian man tried to block the convoy. The footage went viral on Friday with many people commenting on the man’s bravery, comparing him to the iconic image of an unidentified Chinese man standing in front of multiple tanks in Beijing.

“Ukraine just got its very own Tank Man,” one person said on Twitter.

Russian forces advanced an assault on Ukraine early on Thursday, with reports of missile strikes and explosions in major Ukrainian cities. Russian tanks and troops appear to have already entered parts of Kyiv, the country’s capital, on Friday, amid heavy fighting with Ukraine’s military forces.

Ukraine’s Ministry of Defense claimed on Friday that about 2,800 Russian soldiers had been killed in the first 36 hours of Russia’s invasion. Russia has not released any casualty figures.

Viktor Liashko, Ukraine’s minister of health, said on Saturday that 198 people were killed and 1115 wounded so far amid Russia’s military operation, including children.

“Unfortunately, according to operational data, we have 198 dead at the hands of the gunpowder, including 3 children, 1115 injured, 33 of which were children,” Liashko said in a statement on Facebook.