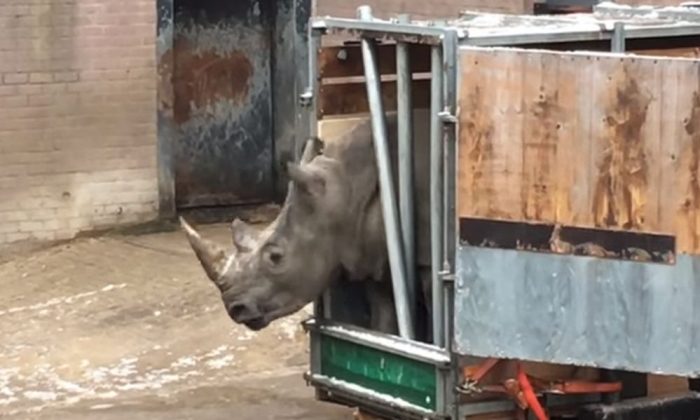 A highly determined Rhino caused a scare for its keepers last Thursday while the workers were transporting it to the Emmen Zoo, in the northeastern area of The Netherlands.

The rhino slammed against the iron bars trying to wiggle itself out of the wooden container to freedom. Such a close escape may have given it a short-lived breath of liberation, but after the keepers regrouped, that dream was crushed, and back into captivity it went. Maybe the cage was too small, or suffocating, because the Rhino sure did look like it was going to succeed. One of the workers must have thought so, too, as he ran away and created panic.

The keepers eventually locked down the only window of escape for the angry ungulate.

This is not the first time Rhinos have attempted to escape. Last year, three female white rhinos casually ran away from the Ramat Gun Safari in Tel Aviv, Israel because a security guard slept on the job and forgot to close the gates.

That escape lasted around 10 minutes, and the guard was fired.