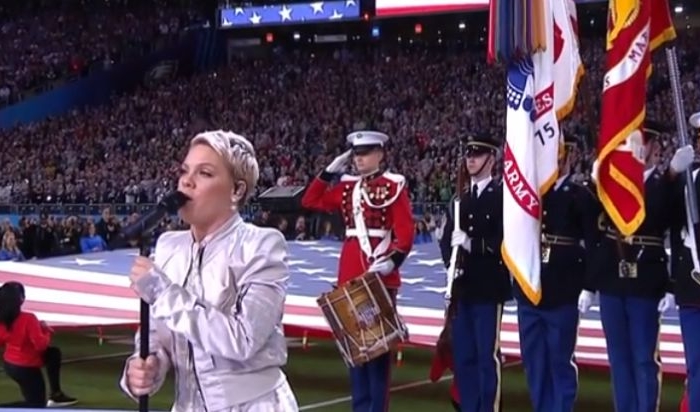 Singer Pink performed the U.S. national anthem before the Super Bowl on Sunday between the Philadelphia Eagles and the New England Patriots.

She brought the crowd to their feet with her rendition of “The Star-Spangled Banner.”

According to People magazine, Pink – born Alecia Beth Moore – was battling the flu.

“Trying to practice the flu away,” she wrote.

“I’ve been waiting to sing this song since 1991 when I saw my idol, Whitney Houston, own this song. And now, my chance has finally come. And it just so happens that this chance comes when I have two small Petri dish kids who literally cough INTO MY MOUTH and rub their snot on my cheek. You can’t write this stuff I swear!” she added.

“And here we are. I’ve arrived at another one of my dreams which is slowly becoming a sort of nightmare,” she continued. “I will tell you, this is one of the biggest honors of my life, singing this song in front of my family, my military family, my dad and brother and step mama and family and the world. And the EAGLES!?!?!