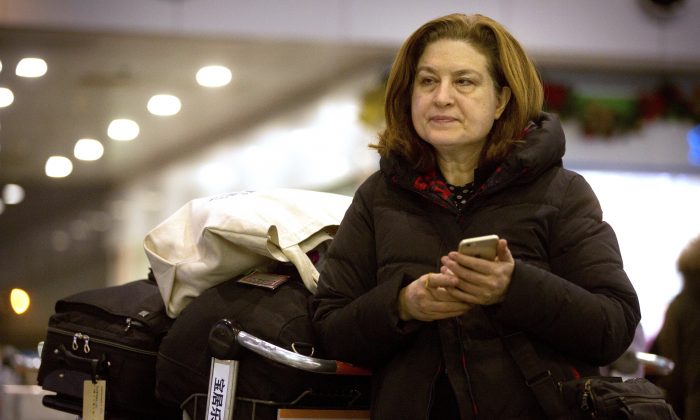 French journalist Ursula Gauthier, a reporter in China for the French news magazine L'Obs, checks her cellphone as she waits at Bejing Capital International Airport in Beijing on Dec. 31, 2015. (AP Photo/Mark Schiefelbein)
China

The French Journalist Who Became Public Enemy No. 1 in China

Veteran China journalist Ursula Gauthier, who has worked for Le Nouvel Observateur and Le Monde, is back in Paris now. Earlier this month, Chinese authorities refused to renew her visa. She revealed she had been under pressure from Beijing over an article she wrote in which she denounced Chinese state media coverage of the Nov. 13 terrorist attacks in Paris.

Her deportation was denounced in the French press corps and raises concerns about the treatment of foreign journalists in China, as well as the silence of the French government.

After the attacks in Paris, media around the world published articles on terrorism supporting France and condemning the assailants. China was no exception, but the message there was somewhat different: Chinese authorities, and state-controlled media, drew comparisons between the Daesh (ISIS) and the Uyghurs, a Turkic-speaking Muslim minority in Xinjiang province, in mentioning an attack that took place a month earlier in a mine to say China too is a victim of terrorism.

The attack had not been previously reported by Chinese media because, according to Gauthier’s offending article, “it certainly was not a terrorist attack.”

Gauthier is very familiar with China, having lived there since 1999. She frequently travels to the regions of Xinjiang and Tibet where the regime faces protests from Tibetans and Uyghurs who are trying to survive and preserve their culture in the face Chinese communist suppression.

Chinese and foreign reporters normally avoid these areas. Those who venture there are shadowed by plainclothes police officers and if caught, face repercussions. Because Gauthier speaks fluent Chinese and doesn’t need a translator—who are accountable to authorities and generally discourage curious reporters from doing their job—she was able to stay under the radar of Chinese surveillance.

“Nobody really knows what is happening in the Tibet Autonomous Region because reporters cannot freely work there, especially since the 2008 bloody riots,” says Le Nouvel Observateur.

Nobody really knows what is happening in the Tibet Autonomous Region because reporters cannot freely work there.
— La Nouvel Observateur

In her article, Gauthier wrote: “Beijing’s policy of forced assimilation of 10 million Uyghurs, which principally targets the cultural, religious, and linguistic spheres, is partly responsible for the bloody attacks, sometimes of a terrorist nature, which have been targeting the Han (the ethnic majority in China) and Chinese officials in recent years.”

According to Le Nouvel Observateur, what happened next was “worthy of a novel by Franz Kafka.”

“I became some kind of No. 1 public enemy,” Gauthier said, according to France Info.

French Journalist Leaving China After Being Forced Out

The state media not only criticized Gauthier, they misquoted her, depicting her as someone glorifying terrorism. They requested she make a traction and public apology. This is a reminder of the Maoist era when intellectuals had to read their self-criticism in public and suffer the wrath of the people.

Gauthier said she also received death threats on her Facebook page. She said many foreign correspondents in Beijing’s were shocked by her deportation.

Her case is far from the first. Cyril Payen, a Bangkok-based reporter for France 24, managed to get into Tibet in 2013 to shoot a documentary, “Seven days in Tibet.”

The documentary denounced the imposed cultural assimilation of Tibetans and the fierce repression of any protest. Payen said the “Tibetan cultural genocide” denounced by the Dalai Lama in 2008 was still taking place.

On June 4, four days after the release of the film (and the sensitive anniversary of the 1989 Tiananmen Square Massacre), Cyril Payen, at home in Bangkok, received a call from a Chinese diplomat. “She asked me to go to the embassy to explain the reasons for the ‘lies’ I peddled in my story. She eventually threatened me: ‘If you do not go to the embassy before June 11th, you’ll have to face the consequences,'” reported France 24.

“Everybody advised me in particular especially to not go to the Chinese Embassy because it would be dangerous,” he said, adding he was not sleeping more than an hour a night during that period. At the same time, in France, people claiming to belong to the Chinese Embassy visited the headquarters of France 24 and requested the report be pulled.

Marc Saikali, editorial director of France 24, did not yield and instead contacted state authorities and human rights organizations, especially ones focused on freedom of the press.

“Such unacceptable behavior might be expected from the mafia but not from senior diplomats,” Reporters Without Borders said at the time.

“We regret that Ursula Gauthier’s visa was not renewed. France wants to remind everyone of the importance that journalists should be able to exercise their profession throughout the world.”

“The France Embassy in China has attempted some mediation. But once the Chinese made their decision (…), we would have liked a stronger reaction than just an expression of some regret,” says Le Nouvel Observateur.

In 2013, when the New York Times journalists were denied visa renewals, U.S. Vice President Joe Biden intervened and threatened Xi Jinping with reprisals. The journalists were given their visas.

For Gauthier, her return to France does not mean the end of her work. “I will continue to write, even a little more on this incident revealing a very disturbing tendency towards an increasingly authoritarian dictatorship. Behind the skyscrapers, there is a dictatorship,” she told France Info.