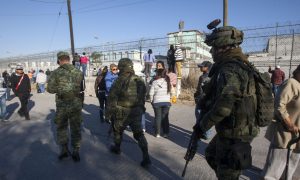 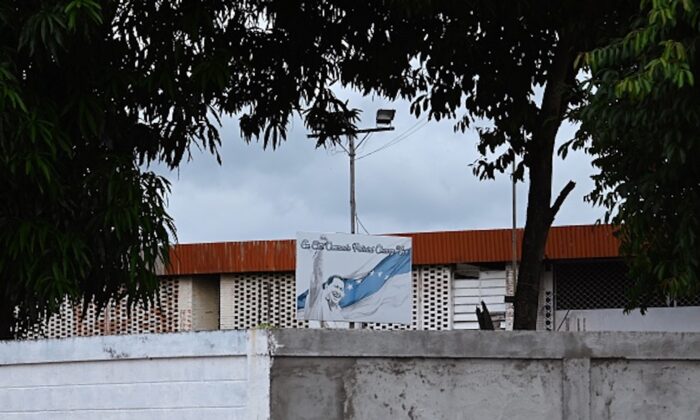 A billboard depicting late Venezuelan President Hugo Chavez is seen on May 25, 2019 on the roof of the police station jail where prisoners were killed during clashes on the eve, in the town of Acarigua, in the Venezuelan state of Portugues. (Marvin Recinos/AFP/Getty Images)
International

CARACAS—A prison riot in the western Venezuelan state of Portuguesa has left at least 46 people dead and 60 injured, according to a rights group and an opposition lawmaker.

Beatriz Giron, director of the Venezuelan Observatory of Prisons which advocates for inmates’ rights, said 46 bodies had been identified after the incident on Friday at the Los Llanos penitentiary. The South American country’s prisons are infamous for extreme levels of violence and poor conditions.

The country’s prisons minister, Iris Varela, told local newspaper Ultimas Noticias on Friday that the incident resulted from an escape attempt and that the prison director had been shot and wounded. She did not give a death toll, and Venezuela’s information ministry did not respond to a request for comment.

Maria Beatriz Martinez, an opposition lawmaker from Portuguesa, said the riot came after a ban on inmates’ family members bringing them food during visitation, which is common in Venezuelan prisons. The visitation restrictions are part of the country’s effort to prevent the spread of the coronavirus in its overcrowded prisons.

Such restrictions have prompted riots in prisons in several countries, including Italy. In Argentina, prisoners rioted last month demanding some inmates be freed due to fears of infection.

By Deisy Buitrago and Vivian Sequera