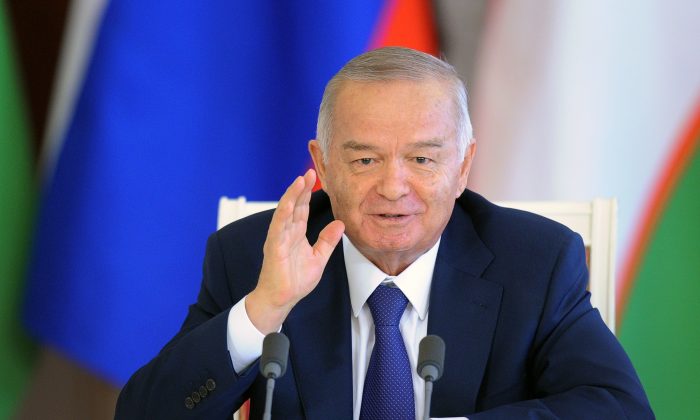 Uzbekistan's President Islam Karimov speaks with journalists in the Kremlin in Moscow on April 15, 2013, after his meeting with Russia's President Vladimir Putin. (Alexander Nemenov/AFP/Getty Images)
Opinion

LONDON—A quick glance at a map of Asia reveals the geostrategic primacy of Uzbekistan. The country has common borders not only with the four former Soviet “stans”—Turkmenistan, Kazakhstan, Kyrgyzstan, and Tajikistan—and but also Afghanistan. And its population of 32 million exceeds the total number of people in the rest of the former Soviet Republics of Central Asia.

Overall, the event highlighted how Karimov succeeded in getting the better of all three world powers, offering them what each needed at a particular time: local oil and gas resources for energy-hungry China; participation in the waging of Washington’s “war on terror;” and joining the Moscow-led military alliance to back up Russia’s insistence on maintaining influence on its “near abroad.”

The Uzbek Constitution mandates that the senate chairman become acting president until a presidential poll can be held within three months. But on Sept. 8, the Uzbek Parliament elected Shavkat Mirziyoyev, the country’s premier since 2003, the interim president. Backed by long-serving intelligence chief Rustam Inoyatov, Mirziyoyev will likely be the official candidate set to garner the usual 90-plus percent of the vote. Though lacking Karimov’s brutal cunning, he will likely follow his master’s policies of repressing Islamists at home and making opportunistic decisions in foreign policy.

With the disintegration of the Soviet Union in 1991, its founding ideology of Marxism-Leninism collapsed. To fill the vacuum, two alternatives emerged: ethnic nationalism and Islamic fundamentalism. A diehard secularist, determined to reassure the non-Uzbek minorities forming a third of the population, Karimov set out to eliminate these challenges.

He made a short shrift of the two fledgling movements promoting democracy and ethnic nationalism. But crushing Islamists with decades-long roots in the Fergana Valley taxed his repressive agencies. This fertile and heavily populated valley, stretching across Uzbekistan, Kyrgyzstan, and Tajikistan, has a history of deep religiosity. Here, the advancing Muslim Arabs defeated the Chinese in 751 AD. The lasting legacy of the Chinese was silkworm agriculture, which complemented the longer-established cotton crops.

Karimov’s resolve to maintain his republic’s large cotton output primarily led him to reject the World Bank’s recommendation to privatize landholding. “If land is placed into private ownership, there will be price speculation and farmers will lose confidence,” Karimov argued in a 1992 pamphlet. Besides preventing speculation in land, leading to large price fluctuations and distortion of production, private ownership would deprive the government of ensuring that a certain percentage would be used for growing cotton—and risk Uzbekistan losing its place as the world’s fifth largest cotton producer and second largest exporter. Hence the state and cooperative farms of the Soviet era survived.

Uzbekistan under Karimov became a founder-member of the nine-nation Collective Security Treaty Organization (CSTO), a military alliance sponsored by Russia, which came into effect in 1994. But when it came up for renewal in 1999, Karimov opted out. That year he allowed NATO troops to participate in military maneuvers on Uzbek soil.

Uzbekistan signed up for a Russian military alliance in 1994; NATO troops joined military maneuvers on Uzbek soil in 1999.

Yet China and Russia—the sponsors of the five-nation Shanghai Cooperation Organization (SCO) formed in 1996, based on the Treaty on Deepening Military Trust in Border Regions—extended membership to Uzbekistan in 2001 even though it lacks common borders with China or Russia. SCO members added fighting terrorism to their list of aims.

Soon after, Karimov’s loose links with the United States tightened in the aftermath of 9/11. Since U.S. aircraft could not fly over Iran to reach Afghanistan, the importance of Central Asian republics rose sharply. Karimov struck a deal with then President George W. Bush to let the Pentagon use the Soviet-era Karshi base near Khanabad, 500 kilometers from Tashkent, in return for increased financial aid and a freer hand to suppress Islamists. Washington’s annual grants to the capital of Tashkent rose threefold to $150 million—a substantial amount for a country whose foreign reserves at one point had shrunk to $1 billion.

Uzbekistan was complicit in America’s notorious extraordinary rendition program, whereby the CIA captured enemy suspects and then delivered them to regimes known to use torture. With an odious record of torturing suspects, the Karimov government unsurprisingly topped the CIA’s list. During a visit to Tashkent after the expulsion of the Taliban from Kabul in November 2001, U.S. Defense Secretary Donald Rumsfeld praised Uzbekistan as a partner in the “war on terror.”

The Uzbek-American honeymoon ended in spring 2005. As the trial of 23 businessmen, falsely accused of belonging to a terrorist organization in Andijan, a Fergana Valley city, neared its end in early May, well-wishers gathered outside the court. An estimated 4,000 demonstrators assembled to hear the verdict on May 11. The judge deferred the sentencing. The next day, the police arrested the demonstrators’ ringleaders. That night, a posse of armed men raided the jail, killed several guards and released the businessmen and other inmates. After seizing the regional administrative office and holding 20 officials hostage, they called on Karimov to resign.

At daylight on May 13, thousands of people assembled in the Babur Square—to hear speeches decrying the deepening poverty and rising corruption. Nearly 12,000 security forces surrounded the audience as a rumor spread that Karimov would address them. He never came. Instead, after closing off the exits from the square, troops fired with automatic rifles on unarmed civilians. The official death toll was 187, with unofficial estimates as high as 600.

Russia and China accepted Karimov’s version that “Islamic extremist groups” caused a “violent disturbance.” He arrived in Beijing in July to be greeted with a 21-gun salute, and departed with a $600 million joint venture in oil. By contrast, the Bush administration called for an international investigation into the episode, to no avail. Later the United States and the European Union imposed military sanctions on Uzbekistan.

An incensed Karimov ordered the Pentagon to vacate the Karshi-Khanabad airbase that served as a transport hub for delivering supplies into northern Afghanistan. He led Uzbekistan back into the Moscow-based CSTO in 2006.

The U.S. gave hundreds of surplus armored vehicles to Uzbekistan in 2012. China was the nation’s top trading partner in 2015.

Facing an escalating Taliban insurgency in Afghanistan, the Obama administration ordered a surge in U.S. forces in 2008 and sought reconciliation with Karimov. It came, courtesy of the German Foreign Minister Frank-Walter Steinmeier. In lieu of lifting of EU sanctions, Karimov let Germany keep its troops in Termez. He granted U.S. forces limited access to the German base and permitted NATO the use of Uzbek railroad to ferry non-lethal supplies from Europe to Afghanistan via Termez on the Uzbek-Afghan border.

Later, by taking Uzbekistan out of the CSTO in 2012, Karimov assured the receipt of hundreds of surplus armored vehicles as U.S. forces in Afghanistan started their drawn-down. In 2014, NATO opened a regional office in Tashkent to liaise directly with other Central Asian republics.

In 2015, China displaced Russia as Uzbekistan’s top trading partner. In June, China’s Xi attended the SCO summit in Tashkent and included a visit to the historic city of Bukhara to celebrate the completion of a large rail tunnel opening the Fergana Valley to more development.

To maintain the upward trajectory in the GDP growth, which reached 8 percent last year, Mirziyoyev will focus on maintaining domestic stability at all costs by suppressing Islamists, jailing dissidents, and controlling the media. In short, Karimov is dead but his governance tenets are set to continue.

Dilip Hiro is the author of “Inside Central Asia,” from which a portion of this article is excerpted. His latest book is “The Age of Aspiration: Money, Power and Conflict in Globalizing India.” Copyright © 2016 YaleGlobal and the MacMillan Center. This article was originally published on YaleGlobal Online.