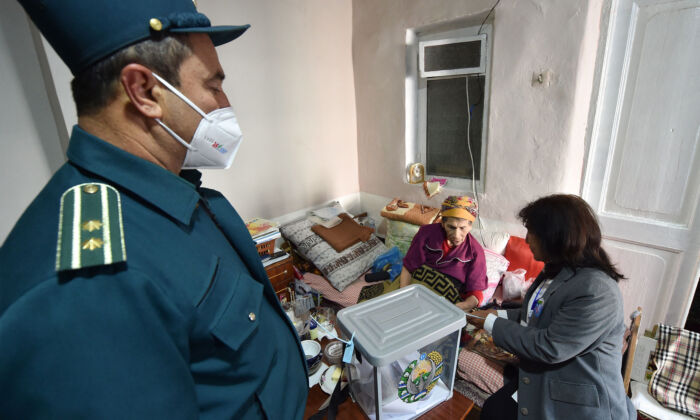 An elderly woman casts her ballot as she votes at home during Uzbekistan's presidential election in Tashkent on October 24, 2021. (Vyacheslav Oseledko/ AFP via Getty Images)
World

ANKARA, Turkey—A western region of Uzbekistan remained under a state of emergency on July 11, following violent clashes early this month that left at least 18 people dead.

Sparked by government proposals to curtail its autonomy, Karakalpakstan was the site of the worst bout of violence seen in the former Soviet republic in 17 years.

“Plans by the central government to abolish the region’s constitutional right to vote on secession appear to have triggered local residents,” Kursad Zorlu, a prominent Turkey-based political commentator, told The Epoch Times.

Although Karakalpakstan has been an integral part of Uzbekistan since 1936, Zorlu said that “it has long nursed a desire for independence.”

More than a week after the initial unrest, the region remains under a government-imposed state of emergency, while both the United States and the European Union have called for investigations into the incident.

On July 1, news of the proposed constitutional changes sparked angry demonstrations in the city of Nukus, Karakalpakstan’s regional capital. Thousands of local residents clashed with security forces, who deployed water cannons, tear gas, and stun grenades to put down the protests.

According to a government tally, 18 people were killed in the violence—including four security officers—and more than 240 were injured. Hundreds of others were reportedly detained, including one local journalist who allegedly issued an online appeal calling for national independence.

According to Zorlu, the main bone of contention concerns Article 74 of the national charter, which grants the region the right to secede from Uzbekistan based on the results of a popular referendum.

“This article wasn’t included in the amended version of the constitution,” he said.

The central government has since imposed a wide-ranging information blackout, including internet outages, making it difficult to determine who started the violence on July 1. But according to officials in Tashkent, Uzbekistan’s capital city, demonstrators in Nukus at one point had tried to storm government buildings, prompting the harsh security clampdown.

It was the country’s worst bout of violence since 2005, when Uzbek authorities crushed a wave of protests that erupted in the eastern city of Andijan. At least 187 people were killed in that incident, for which the government blamed Islamic radical groups.

According to Eurasia experts, the complex political history of Karakalpakstan, which accounts for roughly one-third of Uzbekistan’s territory, has served to foster separatist tendencies in the region.

Under the Soviet Union’s rule, it existed as an “autonomous” Soviet republic for four years before being merged with the Uzbek Soviet Socialist Republic in 1936.

“For example, ethnically and linguistically, the Karakalpak people are much closer to the Kazakhs than they are to the Uzbeks,” Ortayli said.

According to Zorlu, the Soviet policy of demographic rejigging—known as “korenizatsiya” or “indigenization”—was an effective means of maintaining control over subject populations.

“These Soviet-era divisions and mergers remain the root cause of many problems today,” he said.

In 1993, following the collapse of the Soviet Union, Karakalpakstan agreed to remain part of Uzbekistan, with the understanding that it would maintain relative autonomy. It also reserved the right to secede from Uzbekistan, as stated in Article 74 of the country’s constitution, if its people ever voted to do so in a popular referendum.

Zorlu believes that the separatist sentiments that recently came to the fore in Karakalpakstan have less to do with ethnicity than with longstanding socioeconomic factors.

“Rather than political independence, most Karakalpaks simply want a fair share of the region’s potential prosperity,” he said.

Karakalpakstan is rich in natural resources, especially natural gas. But the indigenous population, most of which ekes out a living from agriculture, continues to face poverty, underdevelopment, and general neglect by central authorities.

“The region has suffered from chronic neglect and lack of development since the Soviet Era,” Ortayli said.

According to Zorlu, the recent unrest in Nukus could prompt Tashkent to acknowledge Karakalpakstan’s longstanding grievances and funnel more investment into the region.

“This could provide a unique opportunity to shore up the loyalty of the Karakalpaks and prevent similar outbursts in the future,” he said.

Mirziyoyev appears to have shelved the proposed constitutional changes—at least for now. But he also recently started to blame shadowy “outside forces” for the recent outbreak of violence.

On July 6, a presidential spokesman repeated the claim, pointing the finger at “malicious foreign forces” that are seeking to “undermine Uzbekistan’s territorial integrity and provoke ethnic conflict.”

He didn’t provide any evidence to support the assertion, however, nor did he say which country—or countries—had provoked the unrest.

While opposition figures insist the claims are unfounded, Zorlu said concerns about foreign provocation are “not entirely without justification.”

“Throughout its history, Uzbekistan has faced difficulties due to demographic, political, and social factors—factors that foreign powers have occasionally exploited for their own advantage,” he said.