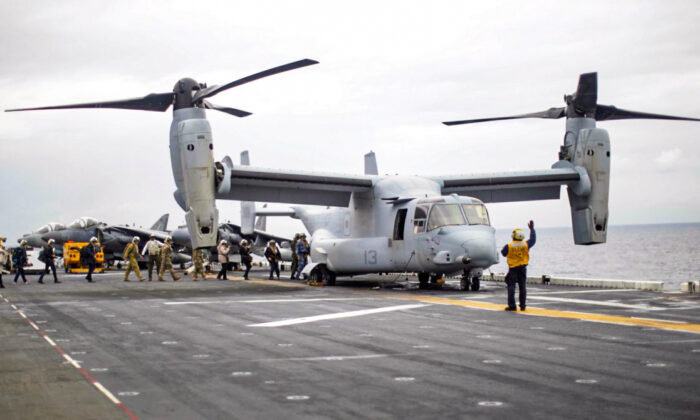 FIle photo: Participants in a ceremony marking the start of Talisman Saber 2017, a biennial joint military exercise between the United States and Australia, board a U.S. Marines MV-22B Osprey Aircraft on the deck of the USS Bonhomme Richard amphibious assault ship off the coast of Sydney, Australia, June 29, 2017. (Reuters/Jason Reed/File Photo)
Australia

US ‘Red Dragons’ Dispatched to Australia

A squadron of U.S. tilt-rotor combat aircraft will be dispatched to the northern Australian city of Darwin to take part in this year’s Marine Rotational Force.

The 10 Bell-Boeing V-22 Ospreys, also known as the Red Dragons, will be part of a contingent of thousands of marines who will be training with the Australian Defence Force.

“The Red Dragons are excited to join 5th Marines as part of the MRF-D 2022 rotation,” Lieutenant Colonel Vanessa Clark, the aviation combat element commanding officer said on April 18 in comments obtained by AAP.

“Honoured to be working hand in hand with the Australian Defence Force, the importance of the U.S.-Australia team cannot be overstated.”

The Osprey fleet follows the arrival of the U.S. Air Force’s largest aircraft, the 75-metre-long C-5 Super Galaxy, which arrived in Darwin in late March, as well as an earlier arrival of the B-2 Stealth Bomber.

The current seasonal exercises have been expanded to around 2,200 servicemen and will include 250 U.S. army personnel for the first time.

The initiative comes as part of a force posture to promote stability in the Indo-Pacific region.

Adm. John Aquilino, commander of the U.S. Indo-Pacific Command, who visited Darwin in late March, said he believed Australia could be at risk of attack from the north.

“There is certainly a threat,” he told reporters on March 23. “Today in the Indo-Pacific, it hosts the most concerning security challenge that we have faced in a number of years.”

The admiral was referring to Beijing’s militarisation of three manmade islands in the South China Sea.

U.S. and Australian officials have also been concerned at a recent security pact “initialled” by the leaders of the Solomon Islands and the Chinese Communist Party (CCP).

The pact, if fully implemented, could open the door for the CCP to station troops, weapons, and naval ships in the South Pacific—extending the reach of the People’s Liberation Army beyond the South China Sea and into a strategically important region under 2,000 kilometres from the Australian coastline.

Australian and U.S. politicians have warned Solomon Island leaders against the deal, with Sen. Bob Menendez (D-N.J.), chairman of the U.S. Foreign Relations Committee, warning that Beijing could become the “owner and minder” of the Pacific nation.

“That’s what their ultimate goal is, and they’ve shown in Africa and other parts of the world that where it seems like they’re coming with good intention—and then their coercive economic policies and practices ultimately [result in you being] owned by China. I don’t think anyone wants to be owned by China,” he said, in reference to the Belt and Road Initiative.

Solomon Islands’ opposition leader Matthew Wale has been critical of the deal, saying it was unnecessary for pacifying internal and external threats.

“All the drivers of instability, insecurity and even threats to national unity in Solomon Islands are entirely internal,” he said in a statement.

Wale called Solomons’ Prime Minister Manasseh Sogavare a “mercenary” of Beijing, and that he had longed for the day he could “exact revenge” on Australia—the prime minister has been a long-time critic of the country’s involvement in the region claiming it was engaging in “colonialism.”

The opposition leader said “that day [of vengeance] has arrived, and he has gladly thrust his sword into Australia’s back. China is only too happy to oblige Prime Minister Sogavare, there is a meeting of minds on this.”