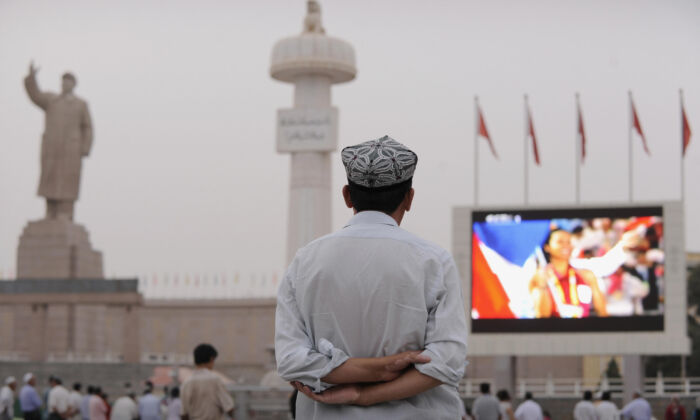 An ethnic Uyghur watches the opening ceremony of the 2008 Beijing Olympic Games on a big screen in the main square in the city of Kashgar, Xinjiang, on Aug. 8, 2008. (Peter Parks/AFP via Getty Images)
China Human Rights

A bipartisan group of U.S. lawmakers asked the International Olympic Committee (IOC) for assurances that uniforms for the upcoming 2022 Beijing Games aren’t made using forced labor, according to a Jan. 12 letter (pdf).

Both Chinese companies, which will tailor sportswear and formal uniforms for athletes and IOC members, had previously stated that they use cotton from Xinjiang, where a large Uyghur Muslim population resides.

“Cotton produced in the XUAR [Xinjiang] is synonymous with forced labor and the systematic repression that takes place there,” the letter reads.

From bedding to socks, search results on China’s e-commerce platforms show that textiles company HYX Group openly advertises the use of Xinjiang cotton. “High-quality Xinjiang long-staple cotton with more than 3,000 hours of sunlight,” is one such description listed in product details.

HYX sponsored the Tokyo Games last year and the 2008 Beijing Olympics before that, and Anta was the first Chinese supplier of sportswear uniforms to the IOC since the 2018 Pyeongchang Winter Olympics, the committee stated.

Despite a “certificate of origin” that HYX Group presented to the IOC, stating that the cotton used came from outside China, the lawmakers doubt its credibility.

The commissioners asked the IOC to make public “assurances” from the two companies and explain why such guarantees can be trusted, given the inability to conduct independent audits in the region.

In 2021, Anta quit the Switzerland-based cotton organization Better Cotton Initiative, after the institution suspended licensing cotton produced in Xinjiang, according to the Business and Human Rights Resource Center.

In June 2021, lawmakers called on NBA players to end endorsement deals with Chinese sportswear firms that are linked to forced labor, including Anta.

Washington accused Beijing of committing “genocide” against Uyghurs and other ethnic minorities in Xinjiang, an allegation Beijing has denied.

Last month, President Joe Biden signed a bill banning imports from the region amid concerns over forced labor, unless proven otherwise, after imposing a diplomatic boycott of the 2022 Games that was later joined by Australia, the UK, and Canada.