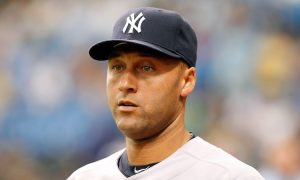 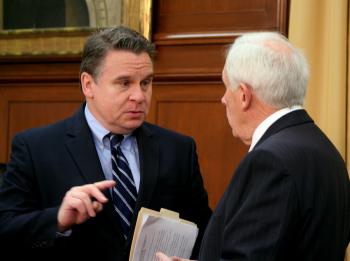 CONGRESSMEN Chris Smith (R-N.J.) confers with the chairman of the Tom Lantos Human Rights Commission, Frank Wolf (R-Va.), before a hearing begins, Jan. 20, on Capitol Hill. Both congressmen are concerned about an upsurge of violence in Egypt and Iraq against Christian minorities. (Gary Feuerberg/ Epoch Times)
International

Upsurge of Attacks on Christian Minorities in Egypt and Iraq

By Gary Feuerberg
Print
WASHINGTON—Christians in Egypt and Iraq are under siege and at risk of being driven from the region, warn experts, and they want the Obama administration to take proactive steps to stem the tide.

In a hearing room packed with Middle East Christians on Capitol Hill on Jan. 20, a wide range of experts drew a disturbing picture of how recent attacks on Christian minorities in Iraq and Egypt are systemic of a larger trend.

On Oct. 31, 2010, at least 70 people were killed and at least 60 wounded during a siege on Baghdad’s Syrian Catholic Church, Our Lady of Salvation Church. The suicide bombers entered the sacred ground, executed worshippers, including two priests and some policemen, making it the worse massacre of Iraqi Christians since 2003.

This terror was followed by 10 bomb attacks targeting Christian homes over Christmas and New Year’s, resulting in the deaths of at least four Christians, said Congressman Trent Franks (R-Ariz.)

On New Year’s Eve in Alexandria, Egypt, a suicide bomber killed about two dozen worshippers as they were leaving a Coptic Church. It was the worst violence against the country’s Christian minority in a decade.

While these attacks and others have made Christians in both Egypt and Iraq and throughout the Middle East fearful, the situation in Iraq is particularly grave. Claiming responsibility for the Syrian church massacre, the Islamic State of Iraq, a front group for al-Qaeda in Iraq, announced that all Christians in Iraq are deemed “legitimate targets,” said Rep. Franks.

One recent attack in Baghdad struck Rep. Franks for its callousness: “Islamic militants left a bomb on the doorstep of the home of an elderly Christian couple and rang the doorbell. When the elderly couple answered the door, the bomb exploded, tragically ending both of their precious lives.” This was one of several Christian homes targeted that evening.

The shear horror of the Oct. 31 siege and massacre was made poignant by the anonymous testimony of Sister Rita from a Catholic Dominican Order, who was hidden from view at the hearing by screens. Many of the victims were members of her own family and relatives and friends of her religious sisters and brothers. She said that when the terrorists entered the church, the priest presiding tried to talk to them. “Without saying a word, they killed him.” Then another priest attempted to do the same and he was killed.

“Survivors of the massacre said that after killing the two priests, the terrorists started killing all the men in the church. … Some people were able to hide in the sacristy, which saved their lives.”

Nina Shea, U.S. Commission on International Religious Freedom (USCIRF) said at the hearing that Iraq’s smallest religious minorities are vulnerable and desperate. “Victimized by discrimination, marginalization, displacement and violence, they do not receive adequate protection and justice from the state and lack militia or tribal structures to defend themselves in the absence of government protection.”

The result has been mass exodus. Many Christians flee north to the violent Nineveh governorate or leave Iraq and become refugees in Syria or Jordan. After the Oct. 31 attack, Shea quoted Iraq’s human rights minister, herself a Christian, who said it was an attempt “to empty Iraq of Christians.”

Iraqi Prime Minister Nur al-Maliki visited the church and condemned the attack, and has tried to persuade Christians not to abandon the country. But it is not enough to protect Christians in Iraq and Egypt from violence and discrimination, said Tamara Cofman Wittes, deputy assistant secretary for Near East Affairs for the State Department. “Ultimately, we have to alter the way the young people are educated about their country and one another, so that they come to see their Christian fellow citizens as an integral and historical part of the social fabric of the country.”

In 2003, prior to the Iraq war, the number of Christians in Iraq was estimated at 1.4 million. Today, about 500,000 remain and “these ancient religious communities face complete extinction,” said Congresswoman Anna G. Eshoo (D-Calif.).