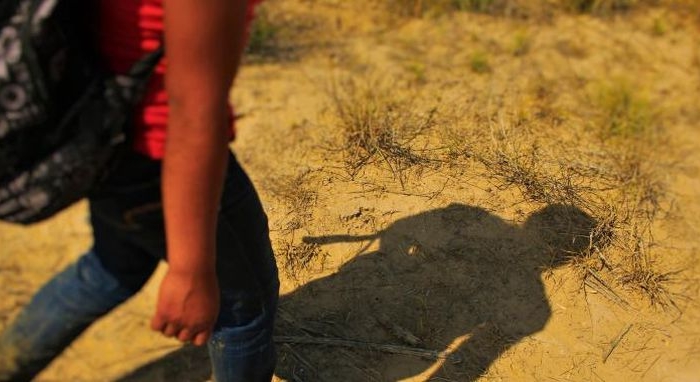 The U.S. Border Patrol said that it encountered an unaccompanied 8-year-old child along the U.S.-Mexico border in Texas, according to a release on July 24, 2018. (US Border Patrol)
US News

The U.S. Border Patrol said that it rescued an unaccompanied 8-year-old child along the U.S.-Mexico border in Texas, according to a news release on Tuesday.

The boy, according to agents from the Weslaco station, cannot “communicate with agents because he only speaks dialect.” He was smuggled across the Rio Grande and was abandoned on a road near the river.

Officials said aside from learning his name and age, the boy was not able to provide any other basic biographical information to Border Patrol agents.

“Upon arriving to the Rio Grande Valley Centralized Processing Center, agents attempted to gather additional information from the child but were unsuccessful due to the language barrier. The Border Patrol is currently working with consulate offices to determine the child’s nationality and dialect origin to process him accordingly,” the Border Patrol stated.

Meanwhile, on July 23, the Border Patrol said that one of its agents was “rocked,” meaning someone threw rocks at the agent, after locating a group of illegal immigrants near Progreso, Texas.

They were under the Progreso International Bridge when agents made the discovery.

“As the agent approached the area, a group of approximately 10 illegal aliens began to throw rocks, which impacted the vehicle multiple times,” the Border Patrol wrote.

After the agent called for backup, additional units arrived, and the group retreated back into the Rio Grande and swam to Mexico.

Earlier this month, Border Patrol agents were credited with rescuing 64 illegal immigrants hidden inside sweltering tractor-trailers in one weekend. In two months, 406 were rescued.

“In addition to securing and protecting our nation’s borders, frontline Border Patrol agents are committed to reducing heat-related injuries and preventing deaths along our borders,” said Border Patrol Acting Chief Carla Provost in a statement in early July. “These rescues are a result of stepped-up enforcement at our immigration checkpoints coupled with our search and rescue efforts that are key to preventing unnecessary loss of life.”

In late June, the Border Patrol released footage that purported to show 57 people crossing the U.S.-Mexico border near Arizona. They were met by agents there.

Tens of thousands of immigrants are crossing the southwest border every month, according to statistics by Customs and Border Protection. In March alone, more than 33,000 unaccompanied minors and family units were apprehended by Border Patrol after crossing the border.