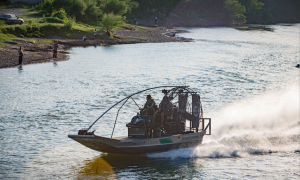 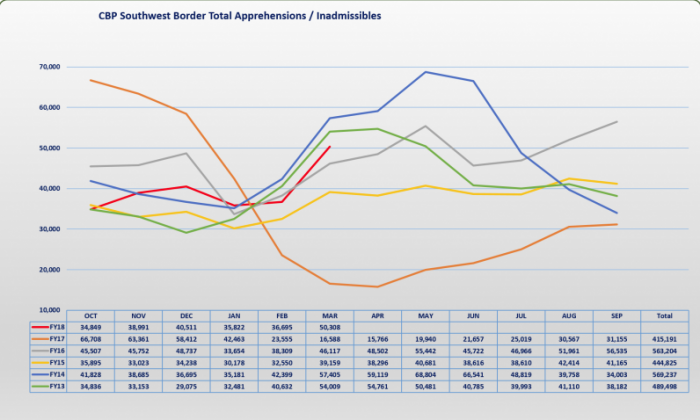 WASHINGTON—Apprehensions of illegal border crossers along the southwest border spiked in March to the highest since 2014, when a massive border surge occurred.

More than 50,000 illegal immigrants were apprehended by Border Patrol agents along the U.S.–Mexico border in March.

Since May last year, the number of illegal crossings have slowly been climbing and have since reached previous levels. The main increase has been attributed to family units (one adult and at least one minor child) and unaccompanied minors; both generally turn themselves into Border Patrol once crossing the border and then claim asylum.

The jump in March, however, is the first major spike in Trump’s presidency. It coincides with much national debate around a potential amnesty for recipients of the Deferred Action for Childhood Arrivals (DACA) program and the subsequent failed immigration reform in Congress.

It’s also important to note that although the March spike follows the normal spring/summer uptick, the climb is as steep as the 2013 and 2014 numbers in the same month.

President Donald Trump said the situation at the southwest border has currently reached “a point of crisis,” and he is mobilizing the National Guard to assist Border Patrol.

“The security of the United States is imperiled by a drastic surge of illegal activity on the southern border,” Trump said in a memorandum to the secretaries of Defense and Homeland Security and the Attorney General on April 4.

“The anticipated rapid rise in illegal crossings as we head into the spring and summer months threatens to overwhelm our nation’s law enforcement capacities.”

Homeland Security Secretary Kirstjen Nielsen said on April 4 that she is working with four governors of states that share a border with Mexico to deploy the National Guard.

Nielsen did not give the size of the deployment, nor the duration. She said she didn’t want to get ahead of the governors, but the deployment “will be strong.”

“It will be as many as needed to fill the gaps today,” she said.

Nielsen said she has discussed with the governors support activities that are very similar to “Jump Start,” an operation by former president George W. Bush that saw 6,000 National Guard troops sent to the border.

She said using the National Guard does not require congressional approval.

A senior White House official said on an April 4 press call that deploying the National Guard will send a strong deterrent signal.

“For individuals thinking about paying a smuggler to come up to the United States right now—that would be a very unwise investment,” the official said.

Before 2011, over 90 percent of arriving aliens were single adult males, according to the Department of Homeland Security (DHS). Today, 40 percent are families and children.

“The traffickers and smugglers know that if you arrive with a family, under our current legal and court system, you have a much better chance of being released into the United States,” said Nielsen. “We have seen the smugglers advertise this as an enticement, and we have seen traffickers unfortunately fraudulently use children to gain entry into our country.”

Nielsen said that before 2009, 90 percent of arriving aliens were Mexican nationals, whereas today, nearly 50 percent are from Central America.

“The traffickers and smugglers know that these individuals cannot, under U.S. law, be easily removed in an expeditious way back to their country of origin and so they exploit the loophole,” she said.

Apprehensions By Sector in March*

*Only includes family units and unaccompanied children; both generally turn themselves into Border Patrol agents once crossing the border and claim asylum.