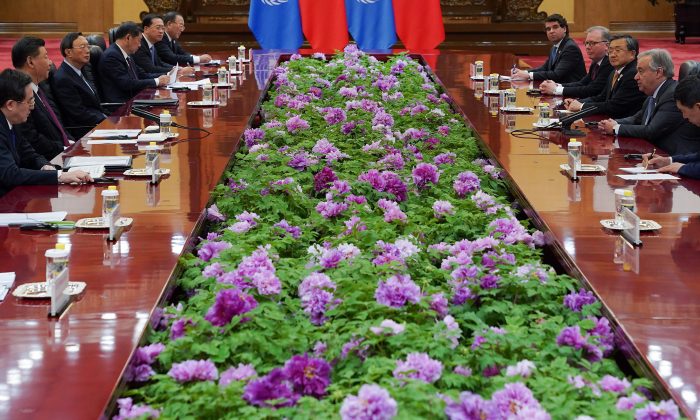 China has faced growing international condemnation for what it calls re-education and training centers in the remote western region. Activists say they are mass detention camps holding more than 1 million ethnic Uyghurs and other Muslims.

Guterres met with Chinese leader Xi Jinping on Friday in Beijing on the sidelines of a summit on China’s One Belt, One Road (OBOR, also known as Belt and Road) initiative. However, U.N. sources said Guterres raised the situation in Xinjiang during a separate meeting with the Chinese regime’s top diplomat Wang Yi.

“The Secretary-General discussed all relevant issues with the Chinese authorities … that includes the situation in Xinjiang,” U.N. spokesman Stephane Dujarric told reporters on Monday. “What the Secretary-General told his Chinese interlocutors is that he fully stands by the initiatives of the (U.N.) High Commissioner for Human Rights Michelle Bachelet.”

Bachelet has repeatedly pushed China to allow the United Nations access to investigate reports of disappearances and arbitrary detentions, particularly of Muslims in the Xinjiang region. China has previously said it would welcome U.N. officials if they avoided “interfering in domestic matters.”

Dujarric said Guterres position on the issue was the same “in private as it is in public” and based on “the full respect for the unity and territorial integrity of China … and that human rights must be fully respected in the fight against terrorism and in the prevention of violent extremism.”

“Each community must feel that its identity is respected and that it fully belongs to the nation as a whole,” he said.

Diplomatic sources say China has become increasingly worried about the overseas backlash against the camps, especially threats of U.S. sanctions.

Former detainees have also told The Epoch Times that Uyghurs are being tortured, raped, and killed in secretive “political re-education” camps.